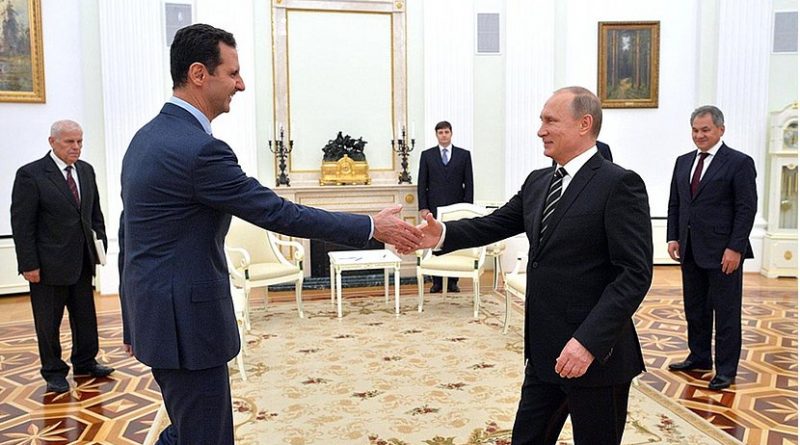 On Wednesday, the US’ Caesar Act, which will place renewed pressure on the regime of Syrian President Bashar Assad, will come into effect. Assad is becoming more and more of a liability. The situation in Daraa and this week’s protests in Suwayda show that he cannot consolidate his power or secure the interests of Russia, his main patron. This means Moscow faces a conundrum about how to engineer a face-saving exit for Assad.

The Russian elites are starting to shift their opinion regarding Assad. More and more, they see in him a stumbling block facing Russia’s interests. But, so far, the people at the top, including President Vladimir Putin, have not changed their mind. Backing down on Assad may signal weakness and could affect the image of Russia as a loyal ally. Since its intervention in Syria began, Russia has been building alliances in the region. The main competitive advantage it promotes to potential allies is that, unlike the US, which has turned its back on its allies when its interests shift, Russia stands by its allies until the end.

Russia also links Syria to other points of contention with the US and the West, such as Libya and Ukraine, while the US wants to treat each issue separately. Russia wants Syria to be a platform from which it can garner international recognition as a superpower. Hence, Putin has called for a meeting similar to the one held in Yalta, in Crimea, at the end of the Second World War, through which Europe was divided into recognized areas of influence between the West and the Soviet Union. Therefore, Assad’s exit comes with a very expensive price tag.

The Caesar Act is likely to further isolate Russia and the Russian companies that do business in Syria. No one would want to deal with a Russian entity that does business with Assad and so is subject to sanctions. Moscow recently claimed increased basing rights in Syria. However, an enlarged presence on the Syrian coastline will not break its potential isolation. To reach the Mediterranean, Russian ships must pass through Turkey’s Dardanelles and Bosporus straits. Historically, Turkey and Russia have fought wars over those two waterways. Moscow won’t be able to send ships to Syria if there is no agreement with Turkey, which brings us back to the Caesar Act.

Russia’s all-or-nothing strategy seems more and more risky. It would be better off cashing in what it has rather than aiming for the jackpot, which might not materialize. The US Congress is quite united on the Caesar Act, while Europe is not backing down on its anti-Assad stance. Germany has put on trial regime officers accused of being accomplices in torture. There is also international recognition that Assad used chemical weapons on his own people. The West will never accept Assad — hence Russia’s need for a deal with international players to guarantee its interests in Syria. That deal will have to exclude Assad.

As new sanctions are looming, core supporters of the Syrian regime are asking Assad to step down. Dr. Mohammed Al-Ahmad, a prominent Alawite whose father was part of the Ba’ath Party’s leadership, is among those asking the president to spare Syria a dire fate under the Caesar Act. And, thanks to the Rami Makhlouf soap opera, more and more members of the regime are worried they will face the same fate as the cousin who fell out of favor. They have started taking their money out of the country, which has further contributed to Syria’s economic meltdown and currency crash.

The Russians should pay attention to their image inside Syria. The protests in Suwayda were against Assad and his patrons, including Moscow. If Russia wants to stay in Syria in the long run, it should show the people that it is on their side. Protecting peaceful protesters from Assad’s violent crackdowns would be a good confidence-building measure.

If the Russian leadership takes these factors into account, it should redo its calculations. But another hurdle emerges if Russia wants to remove Assad: He would never accept such a move, no matter what guarantees Moscow gives him. He knows that he would never be immune from prosecution. No one could guarantee that no Syrian person or group would file a lawsuit against him with the International Criminal Court. He has committed so many crimes that there will always be people who hate him to the point that they would follow him to the end of the earth to take revenge.

It is too late for Assad to leave and take refuge in a gilded cage — he should have done that at the beginning of the conflict, like Zine El-Abidine Ben Ali and Hosni Mubarak, before his hands got stained with the blood of half a million Syrians, including the children who died from chemical attacks. He has lived his entire life in Syria as an absolute monarch. Will he accept living the rest of his life in hiding? Never. Assad will not step down willingly. His only means of survival is to remain in power.

So Russia needs to orchestrate a coup, which brings us back to the image of the loyal ally that Moscow does not want to tarnish. The other option would be to side with the people. Here, Russia has a face-saving opportunity. Putin has always said that he cannot be the one to decide on the future of Syria; that is down to the Syrian people. This proposition is more likely to guarantee Russia’s long-term interests in Syria than a dictator who has lost touch with reality and has no legitimacy, even within his own Alawite camp. Russia can let the popular protests take their natural course, leading to Assad’s removal from power.

Putin is a clever politician who has returned Russia’s prestige in world affairs — a standing it lost with the collapse of the Soviet Union. However, a clever politician also knows that politics is the art of the possible. Keeping Assad is no longer a possibility.