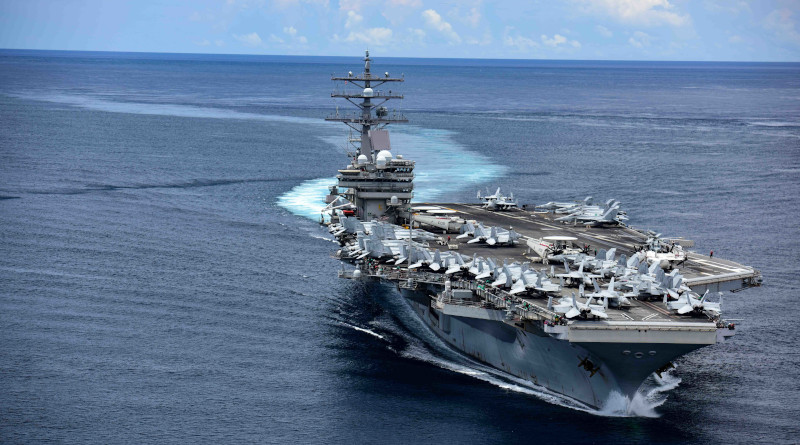 On Monday, the US launched its latest salvo against its ongoing “war” with China. Casting aside all ambiguity, it declared that “We are making clear: Beijing’s claim to offshore resources across most of the South China Sea are completely unlawful, as is its campaign of bullying to control them.”

Till now, even though it was supportive of the Southeast Asian states whose rights were being disputed by Beijing, the US position as articulated by Secretary of State Hilary Clinton in 2010 was that the US would be neutral on the disputes even while affirming the rights of freedom of navigation through the region. Now the US says that “America stands with our Southeast Asian allies and partners in protecting their sovereign rights to offshore resources, consistent with their rights and obligations under international law.”

The US said it was officially aligning its view to the  12 July 2016 verdict of  an Arbitral Tribunal, set up under the United Nations Convention on the Law of the Seas (UNCLOS) which ruled , first, that there was no evidence that China had exercised exclusive control over the waters and resources of the South China Sea (SCS) and therefore had no legal basis to claim historic rights to sea areas within the so-called ‘Nine-Dash Line’. Second,  that while small groups of fishermen had used the rocky outcrops of the sea, collectively called the Spratly Islands, none of them were capable of maintaining a stable community and thus could not claim an Exclusive Economic Zone (EEZ). Third, that some of the areas were, in fact, within the Philippines’ EEZ, and China had violated their rights by interfering with Filipino fishermen and hydrocarbons exploration teams. Lastly, that Beijing’s artificial island programme had violated UNCLOS obligations on protecting the environment.

Predictably, China had rejected the award with Xi Jinping himself asserting that Chinese  sovereignty over the islands existed since “historic times”, and the Chinese foreign ministry declared the award to be “invalid” and having  “no binding force.”

The Chinese have occupied all of the Paracel Islands, but in the Spratly’s, 25 features are controlled by Vietnam, eight by the Philippines, seven by China, three by Malaysia and one by Taiwan. These countries often have cross-claims on the features which are essentially rocks or low tide elevations  which have been built upon to stake maritime claims in the resource-rich area. Though they have been late starters, Chinese construction has been the most extensive, with a clear military intent.

The US has itself not ratified UNCLOS, but it says that it upholds its provisions as customary international law. Among these provisions are the right of innocent passage of ships, military and civil, through the territorial waters of a coastal state, as well as the freedom of navigation and overflight through the EEZs. While the US conducted the so-called “freedom of navigation patrols” (FONOPS) to challenge countries (including India in 2017 and other years) which they say are making excessive maritime claims, its run-ins with Beijing in the South China Sea have taken on an entirely different character. As a sign of its heightened interest in the region, the US  has sharply increased the number of  FONOPs it conducts in the South China Sea. It carried out six in 2018 and nine in 2019. Besides this, it regularly conducts drills and exercises in the region and its deployments make it clear that it views the area as a major theatre of the US-China confrontation.

The American reading of the international law, and Beijing’s misinterpretation of it, is essentially correct. So far China has offered absolutely “no coherent legal basis” for its so-called Nine Dash Line which makes extensive claims of the South China Sea. Yet, the Arbitral Decision did not look at the competing claims of the islands. However, by declaring  that none of the Spratlys islands were “islands” under Article 121 of UNCLOS, it undermined the extensive  maritime claims being made by various countries on the basis of possessing them. The Chinese case has also been ambiguous. It does not clearly say that the Nine Dash Line is its maritime border and therefore all the “islands” within it belong to China. Or that it is merely claiming the seabed resources of the area. The Nine Dash Line does not follow any principle laid down by UNCLOS for determining maritime boundaries.

Even now, the US will continue to remain neutral in the territorial disputes in line with the  with the Arbitral decision. The US has said that China has no valid maritime claims in Scarborough Reef, Mischief Reef or Second Thomas Shoal, and therefore are covered by the US-Philippines mutual defense treaty in the event of an attack on them. In addition, Pompeo has said that China has no basis of claiming the James Shoal near Malaysia, the waters off the Vanguard Bank near Vietnam, the Luconia Shoals near Brunei and Natuna Besar off Indonesia. Tensions have been growing in the region from the beginning of the year. Despite their distractions with Covid-19, both the US and China have been active in the region conducting drills and exercises, or merely displaying a presence.

In early April, a Chinese coastguard vessel rammed a Vietnamese fishing vessel near the Paracel Islands, capturing the crew. In mid April, a Chinese survey vessel began to trail an exploration vessel operated by Malaysian company Petronas. The ship, the Haiyang Dizhi 8, was earlier spotted off Vietnam and was reportedly surveying waters off Brunei and Malaysia which are contested by Vietnam and China. It was accompanied by as many as seven Chinese coast guard vessels. In late April, US and Australian naval vessels,  who were exercising nearby,  showed up in the area. Subsequently, in early May, the US sent another pair of ships to patrol the area where the Malaysian vessel was operating.

Earlier, China also announced the creation of two new municipal districts to administer the Spratly and neighbouring Paracel Islands. The two districts, one to administer the Spratlys and the other the Paracels, will be under the authority of the local government in Sansha city which is located in Hainan. Sansha City was itself declared the prefecture-level city with jurisdiction over China’s South China Sea maritime claims.

So far, US assistance to the country’s affected by Beijing’s muscle flexing has been episodic. US ships do undertake their Freedom of Navigation Operations and at times display a show of force, as they did in the case of Malaysia. Whether this pattern will now change remains to be seen. Significantly, the Philippines, which was seeking to abrogate the Visiting Forces Agreement with the US earlier this year, has reversed course on a decision which would have taken effect next month. Observers say that this was an obvious outcome of Beijing’s moves in the region.The views expressed above belong to the author(s).

Home » US Turns Up The Heat On China – Analysis