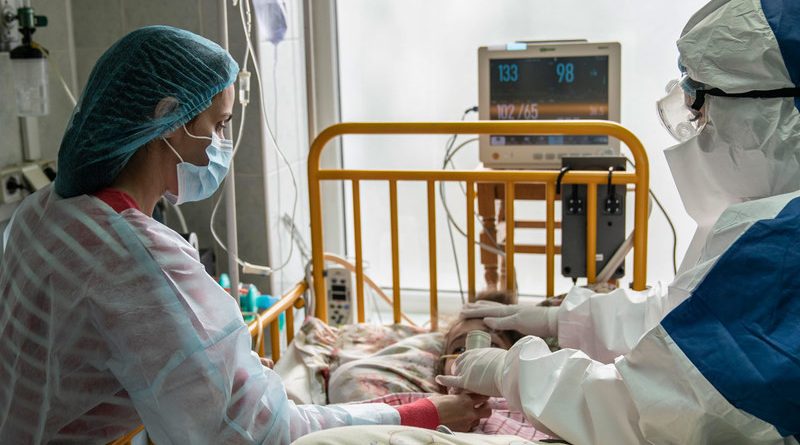 A mother and doctor tend to a young girl with COVID-19 at an intensive care ward in the western region of Chernivtsi, Ukraine. © UNICEF/Evgeniy Maloletka

The UN World Health Organization (WHO) is alarmed at the rising numbers of COVID-19 cases in Europe where nearly 700,000 cases were reported this week, the highest weekly incidence since the pandemic began in March. Overall, Europe has recorded more than seven million cases of COVID-19, with the jump from six million taking just 10 days, according to Dr Hans Henri P. Kluge, the regional head of the WHO.

“The evolving epidemiological situation in Europe raises great concern: daily numbers of cases are up, hospital admissions are up, COVID-19 is now the fifth leading cause of death and the bar of 1,000 deaths per day has now been reached,” he told journalists in the Swiss capital Geneva on October 15.

The tightening up of restrictions by governments is “absolutely necessary” as the disease continues to surge, with “exponential increases” in cases and deaths. The past weekend, daily case totals surpassed 120,000 for the first time, and on both Saturday and Sunday (October 10 and 11), reaching new records.

However, the region has not returned to the early days of the pandemic. “Although we record two to three times more cases per day compared to the April peak, we still observe five times fewer deaths. The doubling time in hospital admissions is still two to three times longer,” he said, adding “in the meantime, the virus has not changed; it has not become more nor less dangerous”.

Dr Kluge explained that one reason for the higher case rates is increased COVID-19 testing, including among younger people. This population also partly accounts for the decreased mortality rates.

“These figures say that the epidemiological curve rebound is so far higher, but the slope is lower and less fatal for now. But it has the realistic potential to worsen drastically if the disease spreads back into older age cohorts after more indoor social contacts across generations,” Dr Kluge warned. Looking ahead, he admitted that projections are “not optimistic”.

Reliable epidemiological models indicate that prolonged relaxing of policies could result in mortality levels four to five times higher than in April, with results visible by January 2021. He stressed the importance of maintaining simple measures already in place, as the modelling shows how wearing masks, coupled with strict control of social gathering, may save up to 281,000 lives across the region by February.

This assumes a 95 per cent rate for mask use, up from the current rate, which is less than 60 per cent.

“Under proportionately more stringent scenarios, the model is reliably much more optimistic, still with slightly higher levels of morbidity and mortality than in the first wave, but with a lower slope – as if we should rather expect a higher and longer swell instead of a sharp peak, giving us more reaction time,” said Dr Kluge.

“These projections do nothing but confirm what we always said: the pandemic won’t reverse its course on its own, but we will.”

The WHO bureau chief underlined the importance of targeted national responses to contain COVID-19 spread.

“Measures are tightening up in many countries in Europe, and this is good because they are absolutely necessary,” he said. “They are appropriate and necessary responses to what the data is telling us: transmission and sources of contamination occur in homes and indoor public places, and within communities poorly complying with self-protection measures.”