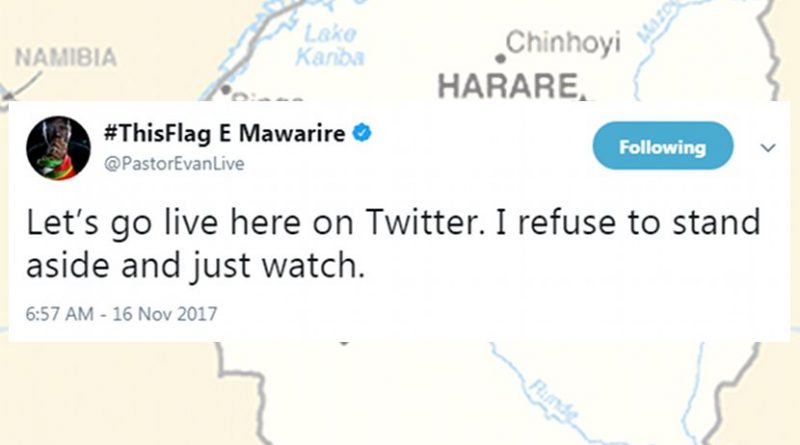 (FPRI) — A visitor to Zimbabwe’s capital city could be forgiven for missing the apparent military coup underway at Harare’s “Blue House.” But despite business-as-usual in much of the city, anxiety and confusion are rife beneath the surface.

Just before dinnertime in the capital on Thursday, prominent pastor Evan Mawarire—founder of the country’s #ThisFlag “citizens’ movement”—took to a livestream on Twitter in an attempt to resolve uncertainty and shape the unfolding situation in favor of citizens. Mawarire spoke with his usual authority, but imparted no clear roadmap. His broadcast became part question-and-answer, part brainstorming session, as questions and conflicting comments from concerned citizens rolled in. “The whole world is watching us; what should Zimbabwean citizens be doing?” he asked.

It appears no one—Zimbabwe Defense Forces included—planned for a coup. Most Zimbabwe observers believed that 93 year-old dictator Robert Mugabe would die in office, and that a political transition of some sort would follow. But when Mugabe last week abruptly removed his vice president Emmerson Mnangagwa—a man with presidential aspirations and a loyal group of powerful supporters—the deposed VP’s calculus suddenly shifted. Security forces loyal to Mnangagwa acted quickly in subsequent days to arrest rivals and secure Mugabe—a largely peaceful series of events that the military continues to claim do not constitute a coup. The international community was slow to respond with assistance, though the South African Development Community (SADC)—a body created to promote cooperation between 16 states in the region—has since held a meeting, and South Africa has sent envoys to facilitate conversations between Mugabe and the military.

Now, Zimbabwean citizens, including Mawarire, are coming to grips with the fact that Zimbabwe’s future may finally be up to them to decide. But they are in uncharted waters. Yesterday, over 115 civil society organizations (CSOs) in Zimbabwe issued a joint statement calling on citizens to merely “freely contribute to their preferred way forward and solution to the current crisis.” Some vocal citizens have urged a significant role for SADC, but many appear to oppose intervention. Mawarire earlier called for a citizens’ march, but his followers were quick to point out to the dangers involved. The only thing Zimbabweans appear to strongly agree on at the moment is the need for a nonviolent transition.

An Afrobarometer survey from January and February of this year suggests that most citizens trust the coup’s leaders, who are prominent army officials. The research organization found that “Almost two-thirds of Zimbabweans […] trust the army at least ‘somewhat.’ But even more said they disapprove of military rule and prefer democracy over any other political system. Importantly, respondents overwhelmingly said they feel ‘not very free’ or ‘not at all free’ to criticize the army.”

These findings are reflected in conversations currently taking place on Twitter and in the Zimbabwean press. There appears to be broad citizen support at the moment for the army’s actions, but a reticence to unwittingly provoke the Blue House’s new guests. Mawarire, for his part, hopes to carefully open conversations with coup leaders by conveying this apparently strong popular support: “Do you support what the Military has done in Zimbabwe?” reads a poll posted to his Twitter page earlier today. As of 9:00 pm in Zimbabwe on Thursday, almost 4,000 people had participated. Mawarire made vague reference in his evening broadcast to his own next steps: he would attempt to engage directly with the army, he said. “If they beat us they beat us, but I don’t think they will beat us,” stated Mawarire.

Zimbabwe joins 40 African countries that have experienced coups since the 1960s, though the phenomenon is relatively rare in the southern region of the continent. Precedents are not exactly promising: more than 30 African heads of state have perished in power grabs, and militaries are often loath to relinquish power once they’ve attained it. As I wrote yesterday, violence stemming from fighting between rival factions or suppression of citizen dissent remains possible despite citizens’ cautious sense of optimism. But Zimbabwe’s “robust and active civil society” promoting “peaceful, non-violent change” may be cause for hope, as Susan Stigant of the US Institute for Peace says.

Zimbabweans fed up with decades of political and economic turmoil are unlikely to take a backseat in the coming days if they sense that the military will delay moving the country in a democratic direction. As Mawarire said this evening, “We need to get to a place where we realize that when we have a moment to change some things, we can’t just sit back; we need to jump in.” What form any citizen action takes remains to be seen. Swelling with a renewed sense of purpose at the close of his broadcast, Mawarire announced, “I think that by tomorrow we should have found a way to reach out to the military.” Then, “I’ll be back with you tomorrow morning.”

About the author:
* Ann Toews, Lt. Gen. Bernard E. Trainor USMC Fellow – Program on National Security. Starting in September 2017, Ann Toews, a U.S. Army veteran, is the inaugural Lt. Gen. Bernard E. Trainor USMC Fellow. Ann formerly served as a military intelligence officer with the 173rd Airborne Brigade in Europe and Afghanistan and later contributed to reactivating the 207th Military Intelligence Brigade in support of U.S. Army Africa. She has interned for the U.S. Department of State’s Bureau of Conflict and Stabilization Operations and World Vision.

Home » What To Do During A Coup? Shocked Citizens Of Zimbabwe Weigh Their Options – OpEd