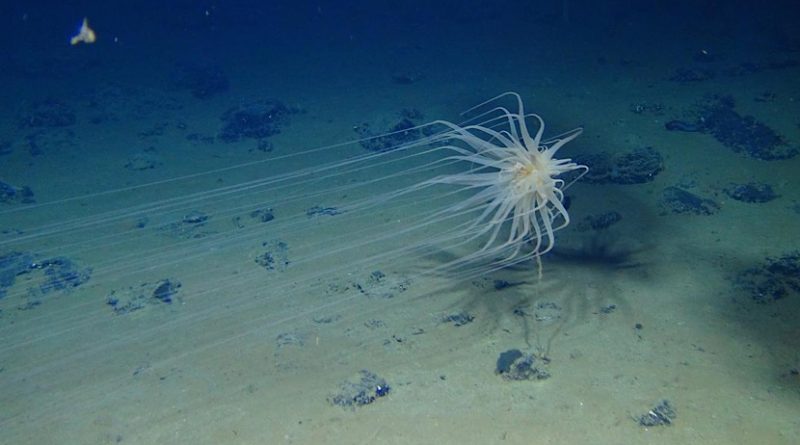 A species called Relicanthus clings to a sponge stalk on the floor of the Pacific Ocean. CREDIT: DJ Amon & CR Smith

A “gold rush” of seabed mining could lead to unprecedented damage to fragile deep-sea ecosystems, researchers have warned.

With major decisions on the future of seabed mining expected in 2019-20, scientists and policy experts from the University of Exeter and Greenpeace have recommended a range of measures to prevent environmental damage.

They also argue that mining in the deep sea (depths below 200m) could be avoided altogether if humanity moved towards a “circular economy” that focuses on reuse and recycling of metals, reduces overconsumption and limits built-in obsolescence of technology.

“This ‘gold rush’ is being driven by our ever-growing demand for minerals,” said Dr David Santillo, a marine biologist and senior Greenpeace scientist based at the University of Exeter.

“Should we allow seabed mining – with the risk it poses to deep-sea ecosystems – or should we focus instead on reducing this demand for virgin minerals?”

The scientists also call for an improved network of Marine Protected Areas, strict regulations and monitoring of all human activities on the seabed, and far greater transparency on the costs and benefits of any proposed mining.

“The deep sea is beyond the jurisdiction of any single state and we need more joined-up global governance to prevent biodiversity loss from human activities”, said Dr Kirsten Thompson, a marine biologist at the University of Exeter and co-author on the study.

“Some areas targeted for seabed mining are known to be hotspots for biodiversity, including habitat for endemic corals and nursery grounds for sharks.”

The paper, published in the journal Frontiers in Marine Science, gives an overview of the current state of regulations and their likely effectiveness, with the aim to stimulate wider discussion before the International Seabed Authority reaches any decisions to allow commercial mining of the seafloor.

“Many marine scientists are concerned that, once the first commercial contract for mining is issued, there will be no going back,” said Kathryn Miller, a co-author on the study.

“Before that happens, we should be absolutely certain that we have looked carefully at all the other options for a more sustainable future.”

The study follows a previous paper that suggested seabed mining could do irreversible damage to deep-sea ecosystems.