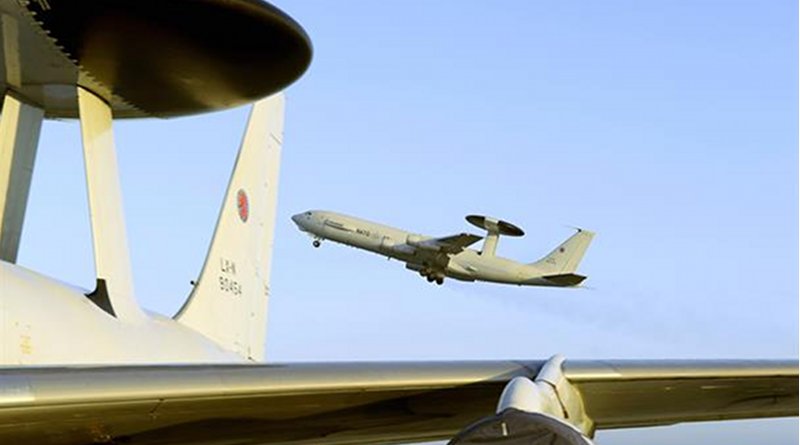 Indra said Tuesday it will work on the modernization of the AWACS, the early warning, surveillance and command and control aircraft which NATO has used to protect the sky of the allied countries for decades and has contributed to the Alliance’s huge superiority in collecting intelligence and directing operations in the most complex scenarios.

Equipped with an unmistakable radar mounted on top of the fuselage, this military aircraft based on the Boeing 707 can detect any hostile aircraft flying at low altitude to circumvent air defense systems within a range of over 400 kilometers. It also locates objectives at sea and offers an improved capacity for command and control of air, land or sea operations.

Each of these aircraft can monitor more than 310,000 kilometers single-handedly. These planes protected and defended the US sky after the 9/11 terrorist attacks and backed the Alliance’s interventions in Iraq, Afghanistan or Syria. They have been a key asset in the fight against the Islamic State (ISIS) and piracy and have protected the skies of allied countries during major events and the Olympics.

On November 27, NATO Secretary General Jens Stoltenberg announced in Brussels the signing of a $1 billion contract to modernize the aircraft and extend its useful life until 2035. One of the objectives of this program will be to provide the platform with much more sophisticated communications and network data exchange capabilities.

For his part, the president of Boeing International, Michael Arthur, cited Indra among the members that will be part of the industrial alliance of European and North American companies that will address what is known as the AWACS Final Lifetime Extension Program (FLEP).

Industrial Coordinator of the FCAS

This contract confirms Indra’s position as one of the leading technology companies in military aeronautics. A leading role that continues to grow as these platforms incorporate avionics systems and digital solutions that are increasingly advanced and complex, the company said.

Indra is the second supplier of avionics systems of the Eurofighter and its technology equips aircraft such as the A400M, the F18 or the Tiger helicopter, among others.

Recently, Indra has been nominated by the Spanish Government as an industrial coordinator for the development of the Future Air Combat System (FCAS). This “system of systems” is based on a new generation of aircraft that will operate alongside several drones and that will be able to interoperate through a powerful combat cloud with all types of platforms and aerial, land, naval and cyber environments.

Indra is a global leader in the sector and provides end-to-end solutions in the five areas of Defense: Land, Sea, Air, Space and Cyberspace, with a firm commitment to integrated systems and proprietary technologies in all the strategic areas in which it operates, combining the physical and digital worlds.

Home » Indra To Participate In Modernization Of AWACS, NATO’s Eyes For Most Complex Missions