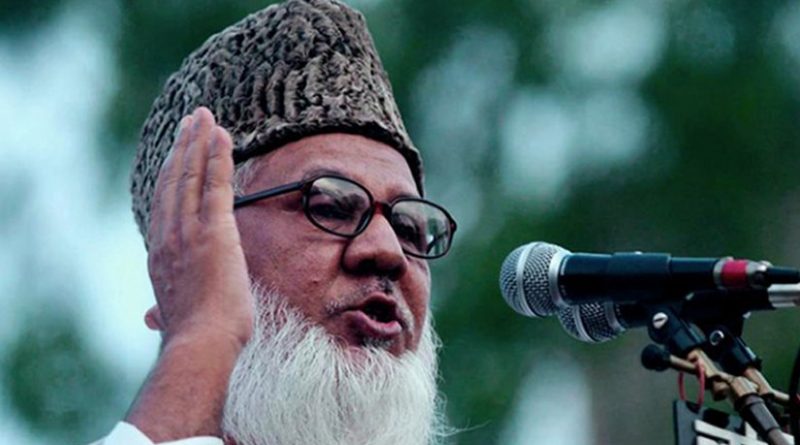 On May 11 in Dhaka Central Jail, Bangladesh hanged its fifth and most high-profile war criminal, amidst extraordinary security measures.

The execution of Motiur Rahman Nizami, the leader or Amir of the Jamaat-e-Islami, triggered both jubilation and anger within the country. Predictably, it also created a diplomatic kerfuffle between Bangladesh and Pakistan.

Both countries have earlier locked horns on the war crimes trials, and executions of convicted war criminals.

However, even distant countries like Qatar and Turkey have reacted adversely, no doubt to burnish their Islamist credentials and to show solidarity for the Islamic brotherhood.

Pakistan and Turkey have a long history of cooperation since the Cold War, when the two countries of CENTO, under US patronage. Qatar, with its vast oil wealth, and Turkey, which has turned increasingly Islamist under President Recep Tayyip Erdogan, are relative newcomers in supporting Islamist causes.

The last lap of Nizami’s controversial life as a pro-Pakistan politician, preacher and former minister began with his arrest in 2010, and came to a close when the Bangladesh Supreme Court rejected a review petition, sentencing him to death. The court’s verdict was published on May 9.

The Supreme Court reaffirmed the death sentence in January this year, and the same bench dismissed his review petition last week.

According to Bangladesh’s Home Minister, Nizami declined to put in a mercy petition, seeking Presidential pardon, setting the stage for his execution after the government order was sent to the prison authorities on 10 May.

On October 29, 2014, the International Crimes Tribunal (ICT) had sentenced Nizami to death for mass murder, rape and targeted killings of intellectuals by the notorious Al-Badr, a vigilante organisation created by the Pakistani authorities to kill and rape those who were fighting for freedom in the erstwhile East Pakistan.

Nizami was the chief of the Islami Chhatra Sangha, the student wing of the Jamaat, and later, the supreme commander of Al-Badr, a close collaborator of the Pakistani Army and a willing tool in one of the worst genocides in history.

These groups were infamous for planning crimes against humanity, and Nizami himself executed the plan to abduct and murder the leading intellectuals of the country on the eve of Bangladesh’s independence. Al Badr, Al Shams and Razakars formed the core of the Pakistan’s local collaborators, who were armed and motivated to murder, rape and intimidate people fighting for liberation from their Pakistani oppressors.

These Jamaat leaders fled Bangladesh and took refuge in Pakistan. They returned after Bangabandhu Sheikh Mujibur Rahman was assassinated by Bangladeshi Army officers, and power passed into the hands of General Ziaur Rahman, the late husband of Begum Khaleda Zia, well known for his Islamist tendencies.

Nizami became an MP in 1991 from his home constituency of Pabna, and again in 2001. He served as minister of agriculture and industry in the Begum Khaleda Zia-led Bangladesh Nationalist Party (BNP)-Jamaat-e-Islami coalition government.

It was during his tenure as minister that he took part in the Pakistan ISI-Bangladesh DGFI conspiracy with the ULFA leader Paresh Baruah to smuggle several truckload of arms and ammunition to ULFA cadres in India. These trucks were intercepted by the local police and the whole conspiracy was busted. Nizami was convicted in that case too.

During the days when Bangladesh was still East Pakistan, the ISI had supported, given refuge and armed Indian insurgents in north-east India, as part of its state policy of destabilising India by asymmetrical warfare. China was also a willing accomplice with Pakistan in this nefarious strategy.

The Jamaat-e-Islami has been de-recognised as a political party by the Bangladesh Election Commission, following a Supreme Court judgement which found the party’s charter in conflict with the country’s Constitution.

The Jamaat-e-Islami has called for the usual nationwide strike or hartal in protest against the execution. While sporadic violence breaks out, there is no large scale disruption reported from various parts of the country, and Dhaka remains calm.

The Islamists have been under pressure from the government of Sheikh Hasina Wajed since 2008, when her party, the Awami League was re-elected, and she became Prime Minister for the second consecutive term.

Jamaat cadres are not allowed to congregate and many second rung leaders are in hiding, fearing arrest for taking part in violent demonstrations earlier.

Despite copious records and evidence, the Jamaat remains in complete denial about the despicable role of its leaders in perpetrating the most heinous atrocities during Bangladesh’s war of liberation. The Bangladeshi Hindu community bore the brunt of these savage atrocities.

To the religiously-indoctrinated Jamaatis, Nizami and his three other Jamaat colleagues, who have been convicted of war crimes and executed, remain ‘martyrs’. They also aver that they merely took a political position supporting the unity of Pakistan in 1971, and assert that the ICT has not been able to prove allegations of murder and rape. The evidence considered by the ICT was overwhelmingly in favour of the prosecution.

The war crimes trials have had their share of controversy in Bangladesh and abroad. Human rights groups abroad have been lobbied by the Jamaat, fully utilising its deep pockets and the international Islamist network to question the credibility of the ICT, and labelling the whole process as ‘political vendetta’, ‘legally flawed’ and below international standards for such trials.

It is no secret that Jamaat leaders have been accused of murders and rapes ever since Bangladesh became independent in 1971, and these allegations, by no stretch of logic, can be labelled political. Allegations have also been made by the same quarters about Bangladesh security agencies using heavy-handed measures, extra-judicial killings and disappearances.

Many Jamaati leaders, accused of war crimes in 1971, escaped from Bangladesh and live abroad, in Pakistan and the UK. They have been spending huge amounts of money to lobby against the Sheikh Hasina government and the ICT in the West.

The UK has become the foremost haven for criminals from the sub-continent, finding protection under a legal framework skewed in favour of asylum-seekers and fugitives.

The vice-chairman of the BNP and Khaleda Zia’s son is also in exile in the UK, hoping to return Bangladesh when his party wins the elections and returns to power.

India has not been able to get any fugitive so far from the UK, despite signing agreements for mutual legal assistance and extradition.

Embracing criminals and fugitives from all over the world is a big money-spinner for the UK, since they invest in property and park their money in London banks and offshore tax havens. While the UK PM rails against corruption in Afghanistan, Nigeria and no doubt against many other countries, its own institutional ‘corruption’ in embracing foreign criminals and their money smacks of utter opportunism under the camouflage of human rights.

In Bangladesh, the Jamaat has assiduously worked as a proxy for Pakistan and, in association with the BNP, functioned as a pro-Pakistan lobby, promoting its anti-India agenda..

The Jamaat is ideologically committed to making Bangladesh a truly Islamic country, with the Sharia the only source of legitimacy for all laws and social order. This predisposes it to treat all non-Muslim minorities as second-class citizens to be tolerated, if they cannot be converted to Islam.

The execution of Nizami has again led to the predictable unanimous resolution in the Pakistan National Assembly, expressing serious concern on his execution.

In the Assembly debate, some members declared erroneously that the execution was against the tripartite agreement between Bangladesh, India and Pakistan, which led to the dropping of the charges of war crimes against 195 Pakistan Army officers and soldiers. The agreement did not preclude arraigning Bangladeshi nationals on war crimes charges.

There were several anti-Bangladesh statements made in the debate, including taking the matter to the UN and the Organisation of Islamic Cooperation.

The Pakistani Foreign Ministry also reacted with a negative statement, and summoned Bangladesh’s acting High Commissioner in Islamabad to hand over a protest note on the Nizami execution.

In a tit-for-tat move, Bangladesh’s Foreign Ministry summoned the Pakistani High Commissioner and handed over a protest note, demanding that Pakistan stop its malicious campaign and behave responsibly.

Reacting to these charges, Prof. Muntasir Mamun, a leading Bangladeshi historian, commented: “The reaction Pakistan made shows how mean-minded it is in its civilization and culture. Each of the word of its reaction is false. Pakistan had launched genocide with such falsehood.”

The highly-respected academician said the statement of Pakistan’s Foreign Ministry proved once again that Nizami and others did ‘politics in favour of Pakistan and carried out a genocide’. The professor added that Pakistan does not practice democracy, but patronises militancy and fundamentalism, and there was nothing to be worried about the reaction of such a country.

Prof Mamun captures the sentiment of the majority of Bangladeshis born after 1971. Recognising the public support for the war crimes trials, the BNP has been silent about the executions.

While the Bangladesh-Pakistan spat was expected because of Pakistani discomfiture at losing their prominent ‘fifth columnists’, Turkey’s move to recall its Ambassador in Dhaka for consultations raised eyebrows.

This is another signal, if another was needed, of how far Erdogan has travelled to promote his image as an Islamist leader. It may also be a favour to its long term ally, Pakistan.

Turkey went somewhat overboard, with its Foreign Ministry issuing a statement saying Nizami did not deserve such a punishment and, surprisingly, Erdogan too making a statement condemning the execution.

India has taken a neutral position on the war crimes trials, considering it Bangladesh’s internal matter. While this is India’s official position, it has been supportive of Hasina and has quietly backed her.

The Indian Foreign Secretary reiterated India’s support to the Hasina government in meeting the challenge of terrorism and violent extremism, in the context of the killings of bloggers and secular activists.

The Islamists are striking back through these stray killings and the Islamic State (IS) is claiming responsibility. The fact is that the killings are the handiwork of homegrown Islamists, possibly backed by Pakistani agencies and elements of the BNP, to destabilise the Hasina government.

There are also indications that India and the USA are coordinating actions to tackle the menace of the IS and other domestic Islamists, via exchange of intelligence with Bangladeshi agencies. This cooperation has to be intensified to prevent further violence in Bangladesh and keep the Islamists under control. This is in the overall security interest of all countries of the sub-continent.

About the author:
*Pinak Chakravarty is a Distinguished Fellow with ORF’s Regional Studies Initiative, where he oversees the West Asia Initiative, Bangladesh and selected ASEAN-related issues. He joined the ORF in October 2014.

This article originally appeared in the Catch News.