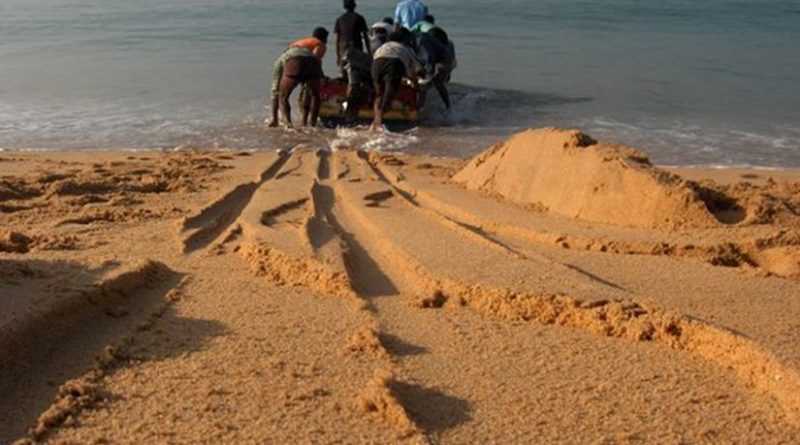 By encouraging deep sea fishing in the Rameswaram area, authorities in India hope to reduce the pressure on the Indian and Sri Lankan seas.

Barring stray and uninformed political demands to Prime Minister Narendra Modi to take up the fishers’ row with his hosts during his Sri Lanka visit last week, southern Tamil Nadu coast was mostly silent on what was a sensitive, livelihood issue. This was because of the clear signs of a fast-tracked internal solution to the problem, which has remained a constant irritant in the bilateral relations over the past decade and more.

According to the welcome solution, the Centre and the State Government are now launching the much-delayed ₹1,500 crore scheme for Rameswaram fishers to take to deep sea fishing, ending their destructive practice of bottom trawling, that too illegally in Sri Lankan waters. They are also taking initiatives to create attendant common infrastructure and facilitating training for these traditional, Palk Bay fishers to familiarise and acclimatise themselves in deep sea fishing.

After halting responses to the Centre’s suggestions on previous occasions, the Jayalalithaa Government offered 25 percent subsidy for the conversion of bottom trawlers into deep sea liners in the Budget-2011, and raised it to 50 percent in 2013. In between, she also sought ₹1,500 crore grant in this regard from the Centre. Now, however, with greater realisation, including the affected fishers, there is all-round enthusiasm for taking forward the scheme.

By encouraging deep sea fishing in the Rameswaram area, the authorities in India hope to reduce the pressure on the neighbourhood seas, both of India and Sri Lanka. Indications are that over the medium and long terms, more and more Tamil Nadu fishers would take to deep sea fishing while in the short-term those among them with non-trawling mechanised boats within Indian waters. With deep sea fishing proving to be profitable and sustainable, expectations are that more and more fishers on the Indian side would move away from their trawling methods, which the government had encouraged in the 1960s, as a major forex earner.

Deep sea fishing involves the creation of additional infrastructure. The 2011 budget provided for the setting up of 20 cold storage plants across coastal Tamil Nadu for fishers to sell their perishable produce in international markets at a time of their choosing for a price that is favourable to them. The human infrastructure also includes training in deep sea fishing, identification of fishing fields on a daily and hourly basis, using GPS and other technological innovations, and habituating them to stay put in sea for days together, which the Rameswaram fishers are not accustomed to.

The civil infrastructure also includes three fishing harbours at Mookaiyur and Kunthukal, for fishers from Rameswaram and down south, and at Poompuhar, for Nagapattinam fishers, now wading into Sri Lanka’s eastern waters. The Kunthukal harbour would especially help the Rameswaram region fishers, who otherwise would have to take a detour along the Pamban bridge for going deep sea, costing extra time and on-board cold storage space, required for diesel storage, instead.

The Tamil Nadu authorities have also reportedly fast-tracked boat-building efforts and tried to slash the required time from nine months to six. Similar attention requires to be given to the work on the fishing harbours, which should not suffer for want of funds. In the absence of a coordinated strategy, there is every possibility that the vessels and fishers would be ready, but not the required harbour facilities for them to land with their catch.

Over time, however, the Tamil Nadu authorities would have to ensure that new trawlers do not hit the near waters, and more especially the Sri Lankan waters. According to international studies, the success rate of conversion in terms of discouraging bottom trawlers from returning to the seas in one form or another has only been five percent. Sustained joint action by the fisheries and revenue authorities, coastal police and the coast guard may be required over a substantial period to make this happen. Involving the traditional fishers’ village panchayat may also help as they have a near-full control over the lives and livelihoods of the members in individual hamlets.

Problems could arise at times over the deep-sea fishers ‘trespassing’ into the Gulf of Mannar Bio-sphere, which the Centre had unilaterally declared as a ‘protected area’. These too need to be addressed through the existing mechanisms in a fisher-friendly atmosphere. Likewise, the Tamil Nadu Government too should fully re-activate the intelligence committee, which used to meet at regular intervals, to review the case of Sri Lankan (Sinhala) fishers arrested in Indian waters.

The Centre should also follow-up with other south Indian States, especially along the east coast up to Odhisa, and also the Andamans administration for fast-tracking the review process for arrested Sri Lankan fishers. This would also give India a moral high ground to demand similar fast-tracked return of arrested Indian fishers and their boats. It needs to be recalled that the first detention of fishers’ boats and high-cost penalties for freeing arrested fishers and boats were imposed by a court in Andhra Pradesh.

The Tamil Nadu fishers alone ended up suffering along with their Puducherry counterparts as other east coast fishers do not fish in the Sri Lankan waters to be caught. For Sri Lankan authorities — courts and navies — it was trespass by Indian fishers and one-sided punishment by Indian courts. The Sri Lanka Navy (SLN) possibly re-oriented its tactics to discourage Indian fishers to ‘trespass’ into the waters that they were mandated to protect and secure.

Despite demands by the Tamil Nadu fishers and claims to ‘historic waters’ and ‘traditional rights’ by successive Governments in Tamil Nadu, the Sri Lankan side has not relented an inch, even while going through the process of multi-layered discussions to no avail. In more recent times, the Tamil fishers of Sri Lanka’s post-war northern province are among the most vociferous of the opponents to any sharing of their sea wealth with their Tamil brethren from across the Palk Strait.

More recently, the Sri Lankan Fisheries Minister Mahinda Amaraweera said that they could not release the detained Indian boats without consulting the Northern Tamil fishers in that country. Tamil Nadu fishers resort to bottom-trawling, which is acknowledged as a destructive method and is banned in Sri Lanka. They also swarm the Sri Lankan waters in numbers and speed which their Tamil brethren out there cannot match.

While Sri Lankan Tamil fishers have sought a time-frame on India’s conversion plans, a clear-cut idea could encourage them, as also their government to seriously reconsider their current opposition to let a limited number of licensed Indian fishers to fish in their waters minus bottom trawling. There have also been other suggestions for cooperative fishing of other types on their side of the Palk Bay. Such ideas would have to wait until they are all convinced that the current Indian plans are serious and sustainable from the implementation point of view.

The success of deep sea fishing on the Indian side could also help in resolving Tamil Nadu’s current concerns over letting Sri Lanka have the tiny Katchchativu islet through the bilateral accord of 1974. This is even more of a sensitive political and strategic concern in bilateral relations, if allowed to fester for longer than already. Late Jayalalithaa and her DMK rival predecessor, M. Karunanidhi, had challenged the accord in the Supreme Court, both in their personal capacities.

The two nations having notified the 1974 and 1976 accords under the UNCLOS (UN Conference on the Law of the Sea), there is no way India could unilaterally retrieve Katchchaativu, as is being demanded by the political class in Tamil Nadu. Any unilateral initiative by any Indian stake-holder could only strain bilateral relations. Given the complexities of the sea-centred security situation when the LTTE was around and its dreaded ‘Sea Tigers’ arm was active, it still has problems plenty awaiting for India, if the pending court cases are also left unaddressed, far too long.