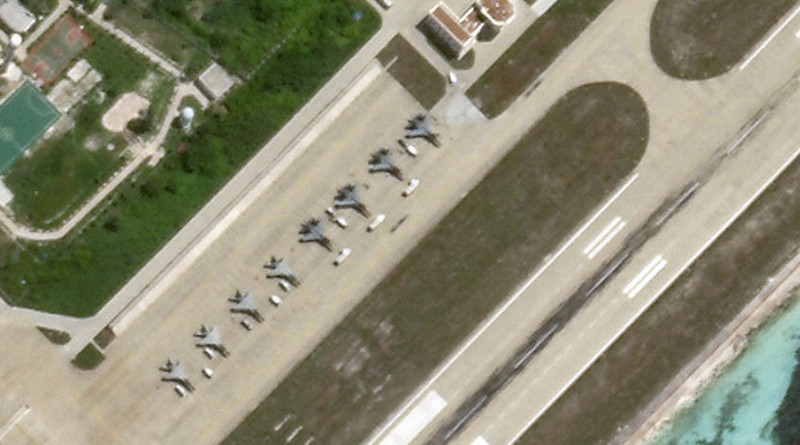 Eight Chinese fighter jets were visible Friday at its key military base in the disputed Paracel Islands as two U.S. aircraft carriers performed their second exercise in the South China Sea in two weeks amid mounting tensions between Washington and Beijing.

Satellite imagery reviewed by BenarNews showed the Chinese planes on the runway at Woody Island. At least four of them appeared to J-11Bs, which are fighter jets in service with the People’s Liberation Army Air Force (PLAAF) and Naval Aviation Force (PLANAF). The other four appear to be a slightly different model of fighter aircraft.

Analysts said it was the most fighter aircraft that have been spotted at one time at Woody Island, which is China’s largest military base and settlement in the Paracels, a grouping of features in the north of the South China Sea that is claimed by China, Vietnam, and Taiwan. Military aircraft have shown up at Woody Island before, as have Chinese warships, most notably during China’s military exercises in the area from July 1 to 5.

Forbes reported the presence of four J-11Bs at Woody Island on Wednesday, but they were not in the same place on Thursday. They reappeared with four other fighter aircraft on Friday.

Their presence points to growing militarization of Chinese-occupied features in the South China Sea, and increased displays of military power by both China and the U.S.

It also coincides with another round of naval exercises Thursday involving two U.S. aircraft carrier battle groups – the USS Nimitz and USS Ronald Reagan. The first maneuvers began on July 4 and lasted six days, the first such “dual carrier drill” by the U.S. in the South China Sea in at least four years.

“Alongside like-minded regional partners, these efforts are in direct support of U.S. resolve to fly, sail, and operate wherever international law allows,” said Vice Adm. William R. Merz, commander of the U.S. Navy’s 7th Fleet, in a statement.

“The capability and flexibility of our Navy is on full display as we support Indo-Pacific security and stability.  There is no better example of our regional commitment, and periodically we will bring multiple teams together in 7th Fleet to practice large-scale coordinated operations.”

The maneuvers also come after the U.S. performed a freedom of navigation exercise on Wednesday through the Spratly Islands, which China considers part of its territory on the basis of “historic rights.”

That followed U.S. Secretary of State Mike Pompeo’s announcement this week of a new U.S. position on China’s expansive claims in the South China Sea, calling China’s claims to low-tide elevations in the Spratlys and to the waters around land features in the area “illegal” under international law.

David Stilwell, the top U.S. diplomat for East Asia, then signaled that the U.S. was considering sanctions against Chinese companies responsible for building China’s bases such as Woody Island in disputed waters.

China’s Foreign Ministry issued a stern response to that threat on Wednesday, and said it will “continue firmly upholding our sovereignty, security and legitimate rights and interests.”

“We hope the U.S. will not go further down the erroneous path,” ministry spokeswoman Hua Chunying said at a press conference in Beijing. “It should behave like a major country and play a constructive role for regional peace and stability.”

Zack Cooper, a research fellow at the Washington-based American Enterprise Institute, said China could be using the U.S. military maneuvers and policy shift as a pretext for what they planned to do anyway – deploying a more permanent fighter aircraft presence to Woody Island.

“I think the Chinese are probably using this [U.S. approach to the South China Sea this week] as an excuse to put the fighter jets on these island, as they always intended to, and they think this is a good time to do it where they can try and argue that the United States is to blame,” Cooper said in an interview. He cited the presence of hangers on Woody Island, which were constructed years ago seemingly for the purpose of housing fighter aircraft.

Regional countries are concerned about the heightened tension in the South China Sea. Malaysia’s Foreign Minister Hishammuddin Hussein expressed concern over the “military posturing” of both the U.S. and China in a press conference Wednesday, and the head of Indonesia’s coastguard mentioned the growing rivalry between the U.S. and China in a meeting with the Coordinating Minister of Political, Legal, and Security Affairs this week.

“I don’t think that this is likely to lead to some sort of direct conflict,” Cooper said. “I do think it’s a clear sign that Beijing is going to use this as an opportunity to bolster its presence in the region.”