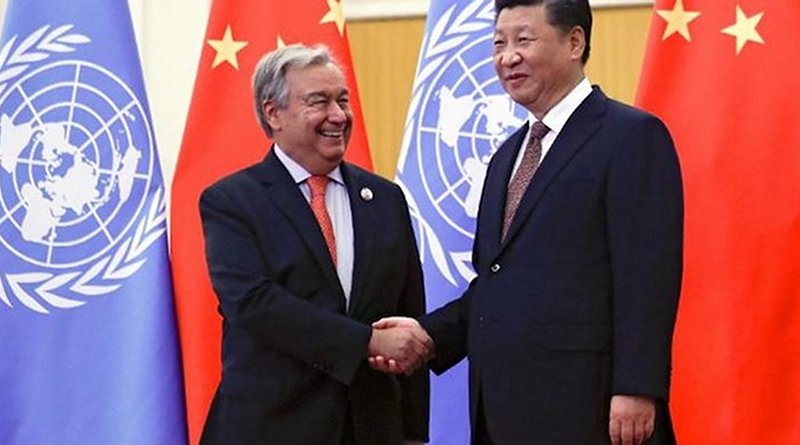 The UN Human Rights Council (UNHRC) has long been controversial. Back in the days of the Soviet Union, Moscow protected communist and ultra-socialist dictators around the world from any attack on their human rights abuses. At the same time routine attacks on Israel, even the extravagant ones, were given free reign in the Council.

Indeed, this still continues with the protagonists often unable in their minds to separate criticizing Israel, which deserves it, with criticizing the religion of Judaism, so-called anti-Semitism. (One should add that many Jews conflate the two as well.)

This month a new controversy has flared. According to the Swiss organization, UN Watch, the Human Rights Council is censoring a human rights complaint about the mass incarceration of Moslem Uighurs who live in northwest China. More than a hundred NGOs from around the world have co-sponsored the complaint.

A letter has also been written by the same grouping that urges UN Secretary-General, António Guterres and the High Commissioner for Human Rights, Michele Bachelet, the former president of Chile whose father was imprisoned and tortured by the regime of General Augusto Pinochet, to condemn China’s escalating abuse of UN rules to censor, interrupt and block references at the world body to its policy on the Uighurs.

The letter itself was refused circulation by the Council’s secretariat in a break from the usual practice. According to UN Watch director, Hillel Neuer, “That the UN is now barring the entire publication of major NGO statements while refusing to tell us which word, sentence or even statement is allegedly in breach of a UN rule is simply Kafkaesque. By exercising arbitrary censorship, the UN is also in breach of our right to freedom of expression, as guaranteed under Article 19 of the International Covenant on Civil and Political Rights”.

China is also criticized for being allowed by the secretariat to receive the names of Chinese dissidents who are registered to attend sessions of the Council.

In reaction to all that has been going on, UN Watch filed an appeal with the UN Secretary-General protesting the “alarming” UNHRC action and accused it of censorship. Guterres rejected the protest. A senior official at the office of the High Commissioner for Human Rights stated that the UN has a right to “intervene” to prevent written submissions which include “personal attacks” (which they don’t) and that in so doing the UN is “not censoring anybody”.

Yet there is no question that the UN human rights office routinely accepts for publication all manner of statements – including inflammatory, racist and anti-Semitic statements which are then circulated as official documents of Human Rights Council sessions.

Neuer is quite right to raise the alarm. He says: “When the UN’s own human rights office joins in what dictatorships like Iran, Venezuela and China push for by censoring speeches and statements about China and when they put Chinese dissidents and their families at risk by handing over their names to the repressive regime, then we are in a very dangerous place. China’s growing and pernicious influence at the UN is alarming and it’s time for democracies to push back to defend Chinese dissidents and victims, including Uighur Muslims, and to stand up for the right of civil society to speak out on their behalf”.

I was involved in a similar dispute with the UN hierarchy when a book I edited to mark the 50th anniversary of the UN was blatantly censored.  Coverage of a protesting press release written by me and Richard Reoch of Amnesty International was wide, including major articles and columns in the New York Times, the Washington Post, ABC television and the BBC. They appeared or were aired on the same day the UN was celebrating its birthday in San Francisco. It could not be overlooked. I’m sure it hurt. But, obviously, judging by what is happening right now, its lesson has been forgotten.

Our accusation of censorship was much broader than the current criticism of China. We confronted a situation where the UN with the knowledge of its Secretary-General, Boutros Boutros Ghali, censored a number of passages. For example, we criticized Saudi Arabia and Egypt for their contempt for human rights, singling out in the former its appalling subjugation of women.

We accused the UN secretariat of “air-brushing history”. In riposte the UN publicly said, that since the book was published under its imprimatur, (in order to ensure good sales), that we, the contributors, were “writers for hire” and that therefore we had no final rights over the text. In fact, we were published by an independent British publisher who raised the money for the book by approaching the top bosses of major businesses around the world.

Censorship is an evil. To be found to be in place at the heart of the UN is a betrayal of its Charter and principles.