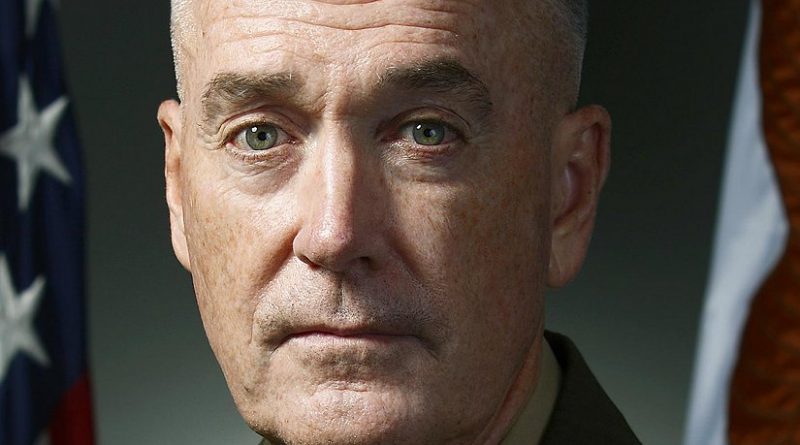 The Islamic State of Iraq and the Levant is “a very sophisticated organization” and that “it would be a mistake to underestimate them,” the chairman of the Joint Chiefs of Staff said Tuesday.

At the tactical level, “they’ve got a number of individuals who are very highly trained, and they have demonstrated proficiency in some of the operations they have conducted,” he said. “The Paris operation is an example and what we see in Syria and Iraq routinely – fairly capable military forces.”

But ISIL is vulnerable, the chairman said, noting that the coalition has more than 60 nations arrayed against the group And that ISIL is isolated. “They are also reliant on an immature logistics and sustainment plan,” he added. “We’re just starting to get after their resources.”

Over the past two weeks, coalition aircraft have hit the gas and oil infrastructure that has been funding ISIL. “They will have fewer resources and they will have more difficulty,” Dunford said. On the ground, the strategy is to isolate them so they are not able to move foreign fighters and resources to reinforce threatened areas, the general said.

Dunford emphasized that there of the nine lines of effort against ISIL, only two are under the Defense Department. “Seven others – to include the narrative against ISIL, the foreign fighters, to include financing – are led by the State Department, [the U.S. Agency for International Development], and so on,” he said.

The coalition relies on local ground forces to confront the terror group, the chairman noted. “Right now, we are reliant on Iraqi security forces, the [Kurdish] peshmerga, [and] provisional militia, both Shia and Sunni,” he said. “In Syria, we are reliant upon forces broadly called Syrian democratic forces.”

There is little enthusiasm for Western forces on the ground, Dunford said. “We would like to see Sunni forces – particularly the [Gulf Cooperation Council] states, to contribute to a greater degree on the ground,” he said. “I think they would have the credibility and come, frankly, without the baggage of Western forces. I think there is some possibility of doing that. We haven’t been able to do that to date, but I think it is something we need to work on.”

If Arab nations were to express interest in providing ground forces, “I think we would absolutely be in a position to support them,” the general said.

Dunford said he does not want to see a large Western force in the region, because that could serve to actually spur ISIL’s recruiting efforts.

Bringing Our Values to War

How the force is used also counts, the nation’s top military officer said. “When we go to war, we go with our values,” the chairman explained. “We plan with proportionality and we execute with discrimination in terms of the targets we are going after. We’re very careful in terms of civilian casualties, and some have criticized us for that. I will not apologize for that, because we are fighting the long fight, and for us to do otherwise would be shortsighted.”

The people of the region want to be released from the ISIL shackles, the general said.

“What they are looking for is decisive action, and that will rally them to our cause,” Dunford said. “If they believe that we are committed, if they believe we are going to stay the course, I think there is a much higher probability of them supporting us. I would draw a distinction between decisive, aggressive action we are taking right now and potentially a large Western force that would be a rallying cry to jihad.”