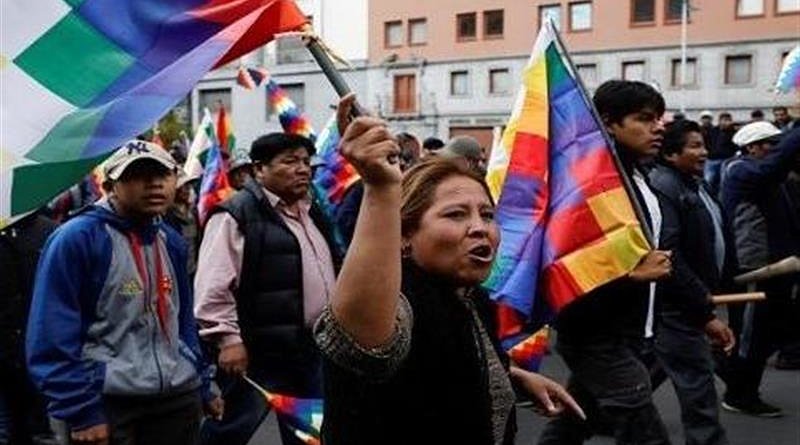 The ouster of former Bolivian President Evo Morales and the creation of an “interim government” by the opposition have not brought an end to the turmoil in the country, as pro-Morales protesters embarked on a march to La Paz on Friday demanding the resignation of self-proclaimed president Jeanine Anez.

On 12 November, Anez announced that she would stand at the helm until new elections which, according to the Bolivian Constitution, an interim president must arrange within 90 days.

The very next day, the transitional cabinet was sworn into office, prompting further controversy as it did not include a single indigenous leader, despite about 62.2 percent of the Bolivian population belonging to indigenous groups.

In an apparent attempt to sooth tensions, Bolivia’s Senate stated on 15 November that Monica Eva Copa Murga, a lawmaker from Morales’ party Movement Toward Socialism (MAS), had been elected to become the new House speaker.

Meanwhile, reports have emerged that right-wing militias are burning the country’s indigenous Whipala flag, which was established along with the previous red, yellow, and green banner as Bolivia’s national symbols by Morales.

As The Nation’s Bolivia-based contributor Jacquelyn Kovarik reported on 13 November, the growing anti-indigenous backlash has prompted fears of deepening ethnic divisions and evoked memories of the 2003 standoff between Bolivian indigenous ethnic groups and the national army that left more than 60 Aymara citizens dead.

Instability Continues to Grow, Civil War Cannot be Ruled Out

Valeria Rodriguez, an international affairs analyst and co-host of the programme “Feas, Sucias y Malas” (Ugly, Dirty, and Bad) of Radio Grafica, Buenos Aires, Argentins, foresees the continuation of the political crisis in Bolivia, saying that the current interim government is illegitimate since Morales’ resignation has not yet been approved by the country’s Plurinational Legislative Assembly.

“Evo goes to Mexico, where Lopez Obrador, who is a representative of the Grupo del Puebla, said that what happens in Bolivia is really a coup d’etat”, she says. “The self-proclamation of the president is not legal and there is a violation of one of the main points of the Bolivian Constitution that requires the resignation before the Assembly”.

Speaking to El Universal, a major Mexican newspaper, on 14 Novermber, Morales said that if the Legislative Assembly does not accept his letter he will return to Bolivia.

According to Rodriguez, “Evo Morales, along with Lopez Obrador, may consider some strategy, a complaint before the Hague Court or a public complaint showing that it is a coup d’etat”.

The analyst suggests that the opposition will try “to legitimise the government of self-proclaimed president Jeanine Anez”.

Rodriguez presumes that one may expect the new Bolivian election to be “biased, passing power to the right, breaking the Constitution, taking away the rights of the indigenous peoples, of the poorest and end in a government similar or much worse than that of Mauricio Macri in Argentina”.

She does not rule out that these developments may pave the way for a civil war in the Andean country, along with US intervention and the formation of a pro-Washington government. Citing leaked audios of alleged opposition leaders, Rodriguez emphasises the role of certain US politicians in an effort to delegitimise Evo Morales.

A Lot Depends on Political Situation in Bolivia’s Neighbouring States

“Every hour more information emerges showing there was no ‘spontaneity’ in the rebellion, that the violent groups carried out a coordinated action with other political, economic and police circles affected by President Morales’ government programmes”, Mele highlights. “All this coordination is evident that it had foreign support and during all Morales’ tenures the US Embassy in Bolivia was a structure that was provided to decisively support the Bolivian ‘opposition'”.

According to Mele, the Bolivian military and police high command’s “strong relationship with the Pentagon military structure” largely contributed to the success of the coup. There are reports claiming that at least six of the key military coup plotters are alumni of the US-based the School of the Americas (Escuela De Las Americas), currently known as the Western Hemisphere Institute for Security Cooperation (WHINSEC).

“The US needs to have Ibero-America aligned under its command to be able to resist the advance of the Eurasian powers in the South American continent and thus negotiate global power quotas with China and Russia globally”, explains the Argentinian political analyst.

He envisions that Bolivia may be forced to adopt US economic and political programmes like other South American governments that have previously submitted to Washington’s pressure.

According to Mele, the new Bolivian leadership may “reinstate the old model of excluding indigenous majorities from political participation and traditional parties [and] return to the socio-political schemes prior to Evo Morales with some cosmetic concessions”.

On the other hand, “we also have an open end, [since] it will be very difficult to install a government ‘docile’ to the US after a decade of the MAS party in power”, the analyst suggests.

“We also have to wait to see how other regional conflicts unfold because Bolivia, due to its geographical confinement, also suffers the consequences of changes in neighbouring countries. Chile’s chapter is not closed, there is a change of political position in Argentina and the Bolsonaro government [in Brazil] can also suffer a wave of social political crisis. All the scenarios are fluid and open and will surely have an impact on Bolivia”, Mele underscores.

This article was published by Sputnik News and reprinted with permission