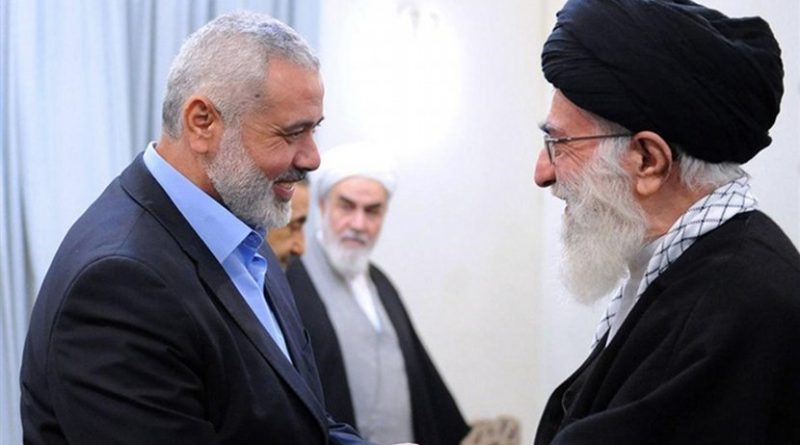 In a letter to Leader of the Islamic Revolution Ayatollah Seyed Ali Khamenei, Chairman of Hamas Political Bureau Ismail Haniyeh praised the Iranian nation and leadership for supporting Palestine and the anti-Israeli axis of resistance.

In the letter to Ayatollah Khamenei, Haniyeh pointed to a major plot that the arrogant powers have hatched against al-Quds (Jerusalem) and the Palestinian nation with the purpose of wiping out the Gaza Strip as the bastion of resistance, ending the fight against the Zionist regime, and normalizing the relations between Israel and the dependent rulers of regional countries.

He also praised the popular Intifada (uprising) in the West Bank and the city Quds as a phenomenon foiling the plots by the US and the “rulers of hypocrisy” who seek to terminate the issue of Palestine.

Hailing Iran as a stable and resisting nation that has stood against arrogance, Haniyeh expressed gratitude to Imam Khamenei and the Iranian nation for providing the popular Palestinian resistance movement with various kinds of support.

Denouncing the blockade of Gaza and the economic and medical embargo on Palestinian people in the coastal enclave with the aim of creating a humanitarian crisis and undermining the main bastion of resistance, Haniyeh said Washington is trying to put an end to the Palestinian fight against the Israeli regime.

In that case, he added, the rulers impatient to appease the US and Israel could normalize and make public their ties with the Zionist regime, and then the hostile ploys could be targeted on Iran.

Haniyeh also highlighted the significant role of Ayatollah Khamenei in leading the efforts to counter a project on termination of the Palestinian issue.

Iran, under expert guidance of Ayatollah Khamenei, has played and keeps playing a major role in strengthening the Palestinian resistance, he added.

The Hamas official finally refereed to the massive Intifada in the West Bank and Quds as the practical approach to thwarting the new plot against Palestine in the wake of US President Donald Trump’s move to harm the religious nature of Palestine by recognizing Quds as the capital of the Israeli regime.

The US president’s announcement of Quds as the capital of Israel has drawn widespread international condemnation and sparked protests in the Palestinian territories.

Ayatollah Khamenei has described the US controversial move as a sign of “weakness and incompetence”, saying, “The Islamic world will definitely stand against this plot and the Zionists will receive a bigger blow.”

“Dear Palestine will be undoubtedly liberated at last,” the Leader said last month, stressing that the issue of Palestine is the paramount political subject in the Muslim world.