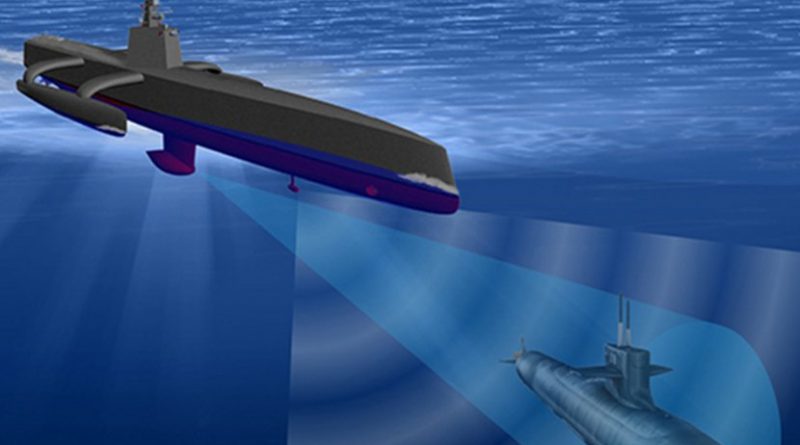 Two recent developments in the domain of disruptive technologies have invited the attention of naval planners and the strategic community. These relate to US and Chinese investments in unmanned vessels that can shape future naval operations as also impact security dynamics in the South China Sea (SCS).

First, the US Navy inducted an Anti-Submarine Warfare (ASW) Continuous Trail Unmanned Vessel (ACTUV) designated as Sea Hunter-I. Developed by the Defense Advanced Research Projects Agency (DARPA), the vessel is designed to conduct “missions spanning thousands of kilometers of range and months of endurance under a sparse remote supervisory control model” and also be compliant with “maritime laws and conventions for safe navigation, autonomous system management for operational reliability, and autonomous interactions with an intelligent adversary.”

Although the potential roles for the Sea Hunter-I have not been made public, its multi-payload capability has been tested during trials. In 2016, it towed a parakite “packed with communications equipment from a parachute connected to a vessel” called Towed  Airborne Lift of Naval Systems (TALONS), and in 2017 it was put to mine-countermeasure trials. The US Navy has now placed an order with DARPA for Sea Hunter-II, and the Office of Naval Research (ONR) has begun to explore new uses for the platform.

Second, China has begun work on the world’s biggest test facility for unmanned vessels in waters around Zhuhai, which is a gateway to SCS. The test site designated as Wanshan Marine Test Field, covering an area of 771.6 sq km, will be developed in phases – however, in the first phase, only 22 sq km will be available for trials. The announcement of this test facility comes close on the heels of successful trials in January 2018 of the Huster-68, a 6.8-metre unmanned vessel developed by Shenzhen Huazhong University of Science and Technology.

Similarly, in December 2017, Beijing Sifang Automation (Sifang), a research and manufacturing company, announced that it was ready to commence production of its SeaFly unmanned surface vessel (USV). The 4.5-tonne SeaFly-01 can carry a payload of 1.5 ton comprising a variety of electro-optical and infrared (EO/IR) imagers and other electronic support measure (ESM) sensors. Interestingly, it can also be “equipped with a retractable unmanned aerial vehicle (UAV) launch and recovery system, which enables the SeaFly to function as a ‘mothership’ for small vertical take-off and landing UAVs.” Another interesting feature of the SeaFly is its line of sight control for up to 50 km using a “shore-based mobile or fixed command-and-control (C2) centre, while beyond-line-of-sight (BLOS) control is supported by the indigenous BeiDou satellite navigation system as well as satellite communication (SATCOM) equipment.”

Meanwhile, during the All China Maritime Conference and Exhibition in Shanghai in December 2017, a Chinese developer of unmanned vessels unveiled a 7.5 ton unmanned vessel – Tianxing-1 – and claimed it to be the fastest unmanned vessel with a speed of 50 knots. Further, the vessel can be put to operations for maritime law enforcement and support naval operations.

These developments clearly demonstrate that unmanned platforms offer new capabilities for operations at sea, and in the case of the US’ Sea Hunter, it offers enormous payload flexibility for a variety of potential missions including anti-submarine warfare and intelligence, surveillance, reconnaissance (ISR) duties, thus expanding the range, flexibility and effectiveness of the US Navy’s operational capability. According to DARPA, “ACTUV represents a new vision of naval surface warfare that trades small numbers of very capable, high-value assets for large numbers of commoditized, simpler platforms that are more capable in the aggregate.”

The Chinese high speed Huster-68 can be an effective platform for maritime law enforcement duties without putting personnel at risk and can also be creatively put to use for ISR duties. Although the SeaFly unmanned surface vessel (USV) boasts of a number of unique features such as launch and recovery of UAVs, it remains to be seen how it performs at sea, where the operating environment is much more severe. Further, its small size precludes sustained operations and it has to remain close to the ‘mother ship’ for  recovery, unlike the US’ Sea Hunter-I which is a prototype for “an entirely new class of ocean-going vessel—one able to traverse thousands of kilometers over the open seas for months at a time, without a single crew member aboard.”

It is fair to argue that these technology demonstrations signal, at three levels, the unfolding of a new naval competition between the US and China. First, at the technological level, China is pitted against the US’ technological superiority and is attempting a ‘catch up’ given that at present it cannot neutralise the US’ scientific advantage despite its unprecedented investments in building disruptive technologies.

Second, the US has chosen to develop large size unmanned vessels that can stay at sea for longer durations whereas the Chinese prefer smaller USVs, clearly suggesting their intention to use these in swarm configurations.

Finally, at the level of freedom of navigation operations (FONOPs) in SCS, it is plausible that the US may prefer to deploy unmanned naval platforms both as an alternative or as complementary to the guided-missile destroyers and shallow draft trimaran Littoral Combat Ships (LCS) deployed for countering China’s excessive and expansive maritime claims. This scenario poses new challenge for both the US Navy and the PLA Navy to operate and respond to unmanned naval operations by either side.