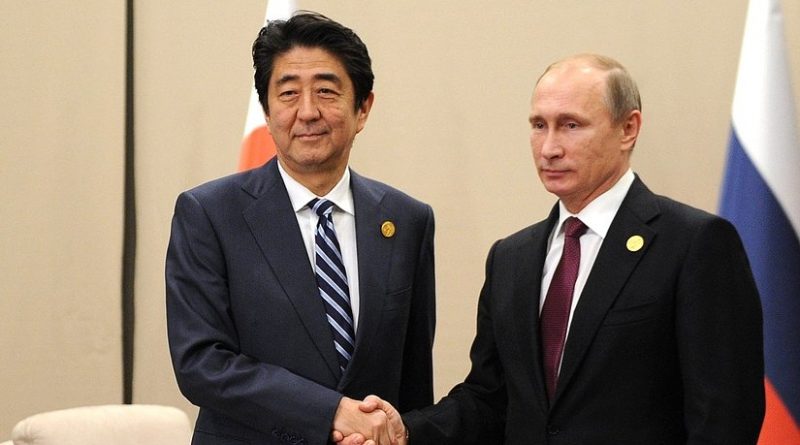 On 6 May 2016, Japanese Prime Minister Shinzo Abe met with Russian President Vladimir Putin in Sochi. During the meeting, Abe presented an eight-point plan on bilateral economic cooperation with Russia, which included cooperation on oil and gas development and modernisation of seaports and airports in Russia’s far east.

Diplomatic relations between Tokyo and Moscow have remained strained due to a decade old dispute over a group of islands claimed by both. Both governments are yet to sign a peace treaty to end World War II after the erstwhile Soviets had seized four islands (Etorofu, Kunashiri and Shikotan, and the Habomai islets group) off Hokkaido, which is part of what Tokyo identifies as the Northern Territories and Moscow, as the Southern Kurils.

The current phase of Russo-Japanese relations can be traced to April 2013, when Abe became the first Japanese leader in a decade to make an official visit to Russia in a bid to resolve the territorial differences and expand energy ties. This was a special effort by Tokyo to open a new chapter in its relations with Moscow.

However, shortly after Abe visited Sochi in February 2014 for Winter Olympics, bilateral relations grew strained. Japan went on to join the US and the EU in imposing sanctions on Russia in order to penalise it for annexing Ukraine’s Crimean peninsula. Consequently, Russian president’s Tokyo visit that was scheduled for later that year, was put off.

Abe in Sochi: Round II

After his three-hour meeting with Putin in Sochi on 6 May 2016, Abe told reporters that he sensed a movement towards a “breakthrough” in the stalled peace treaty negotiations. The meeting had included a 30-minute session where the leaders talked one-on-one. Both leaders also agreed to hold a meeting of senior officials on the territorial dispute in June 2016.

There are differing perceptions of Abe’s latest visit to Russia. The US and EU view it as a breakthrough in Kremlin’s efforts towards ending the two years of isolation Russia faced due to the Ukraine issue. Russia on the other hand attributes Abe’s visit to the China factor and the current situation in East Asia that including concerns over the North Korean nuclear missile programme and the East China Sea dispute.

The visit is also being seen as a failure of US President Barack Obama’s policy in trying to isolate Russia over the Ukraine issue. In February 2016, Obama had asked Abe to postpone his Russia visit until after the G7 summit – one which Russia is excluded from, and Obama would be attending – that is scheduled to be held in Japan’s Ise-Shima region on 26-27 May. A spokesperson of the US Department of State had recently stated that Washington wants a “continued unity” of its partners in dealing with Russia.

To that end it is felt that Abe timed his Sochi visit with Washington’s ongoing consultations with Moscow over the Syrian crisis so that US could not insist on Japan’s commitment in isolating Russia.

Japan sees a role in Putin’s pivot to the east; and one of the elements of this pivot is the development of Russia’s resource-rich far eastern regions that are likely to witness substantial Chinese involvement. This is likely the motivation for Japan’s sanctions against Russia over Ukraine being moderate and symbolic. At present, Tokyo’s confidence in its economic leverage also comes from state of the Russian economy, which has been hit by falling energy prices, depreciating currency, and high inflation.

Russia’s geopolitical isolation and economic situation has enabled China to squeeze more out of its dealings with the former. To address this growing imbalance, Russia needs strong partners and strategic options to leverage its uniqueness and one can see immense potential in Japan as a partner to Russia.

The significance of this engagement lies in the promise that strong Russia-Japan relations will better enable both countries to tackle their economic and geopolitical challenges. So far, both countries have only restricted and decreased their respective options and capacities by not cooperating and collaborating.

While Russia, with falling energy prices and a depreciating Rouble, has found it increasingly difficult to market its oil and gas and finance its energy infrastructure developments, its neighbour Japan has been importing expensive LNG from half way across the world to meet its energy requirements. This, despite Japanese firms already possessing stakes in oil and gas projects off the Russian far eastern island of Sakhalin. Both countries can mitigate their economic problems to a degree by simply enhancing their bilateral trade, investment and energy ties.

An uptick in Russo-Japanese ties would not only improve their geopolitical postures and options but would also transform the Asian geopolitical canvas.

This article appeared at IPCS and is reprinted with permission.

2 thoughts on “Russia-Japan: Onset Of A Thaw? – Analysis”