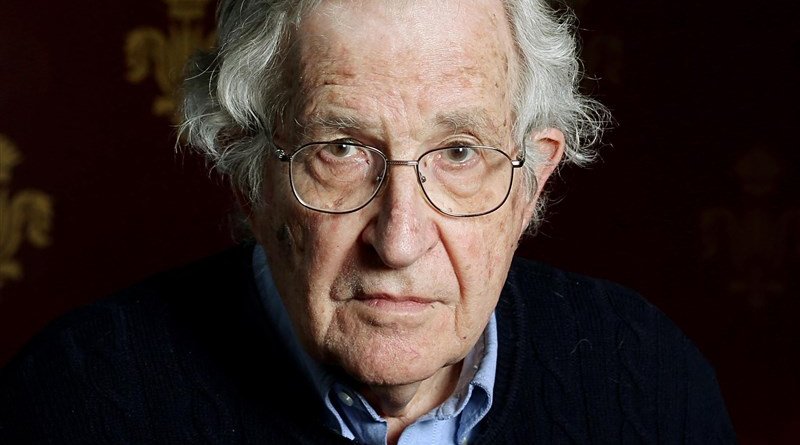 A person could make errors in a lot of things; but one has to be essentially correct. The opposite cannot be the case that someone is basically wrong albeit accurate with relatively insignificant details. If I had to choose a candidate for the essentially correct person whose thought and influence is widely felt across humanities and social sciences, it would be Noam Chomsky; and for the wrong, there are plenty of candidates who get some of the details right once in a way but are at odds with what is good for humanity as a whole.

The questions are fundamental: do we live in a just or an unjust world? If we agree that it is indeed an unjust world, is it unjust by chance or is it because a small group of men have decided to keep it that way as it suits their interests? Why is it that there are children in parts of the world who go to bed on empty stomachs while there are rich men who don’t know what to do with their abundance? These are not rhetorical questions because they demand answers that touch upon both human conscience and social consciousness.

That is the context in which we must see the life and work of Noam Chomsky who belongs to a proud lineage of “renegade Jews” (I am taking the phrase out of Rebecca Goldstein’s book Betraying Spinoza: The Renegade Jew who gave us Modernity), from Spinoza to Marx, Emma Goldman, Rosa Luxemburg, Howard Zinn and Eric Hobsbawm among many others. He represents an intellectual minority dedicated to the pursuit of truth in defense of those who are not in a position to raise their voice against power when it is arbitrary and authoritarian.

As a student in the doctoral program, Chomsky was a part of my dissertation as I was keen on examining his theory of language in relation to his social and political vision. In the ideal anarchist society, people are neither good nor bad, or at best a combination of both, which is more human than being either sadistic power-mongers or voluntary victims of a cruel, vindictive system that forces them to act in ways that are dishonorable. What needs to alter if we must have a just society is that at any point the ruling elites ought to be challenged and brought to book.

Chomsky’s critique of ruling elites rests on the thesis that the “ability to acquire language is basically a fixed, uniform species property” (Chomsky, 1996, p.27) which in turn is reflected in a “a vision of a future social order” ((Pateman, 2005, p.114) where the human person is not “an indefinitely malleable, completely plastic being, with no innate structures of mind and no intrinsic needs of a cultural or social character” (Pateman, 2005, p.114).  Chomsky’s premise is that “The properties of such sentences as ‘John is too stubborn to talk to’ need not be learned—fortunately, or no one would know them; they are determined in advance, as part of the biological endowment” (Chomsky, 1996, p.28). In turn, the same “biological endowment,” that forms the basis for using sentences whose properties need not be learned, provides humankind with the tools of resistance to fight an unjust order, because it is within human nature to make demands for dignity and a decent life.

The poor and the illiterate, the rural peasantry, landless labor, the weak and the subaltern, all of them are biologically endowed with the capacity to fight for an egalitarian order as much as the one who goes to a university and acquires the skills of modern education. An understanding of one’s own intrinsic desire to be treated as equal is as natural as drinking water for a child who knows the meanings of sentences that he or she learns without having to be explained everything connected to how the sentence is formed. Most human communication in any language happens naturally and people are not confused in the daily use of words and meanings. This is true of all languages and all peoples. This is likewise true of the human need for self-respect and community living.

If the human person is biologically endowed with the capacity both to acquire language and be able to imagine what a just society is like, where does the equally human capacity for injustice come from? Chomsky says, “If you want to create a humane world, you change the circumstances” (Chomsky, 2012). All people might be endowed with the capacity to be good or just, which is not the same thing as saying that all people are just as most human behavior is a response to the circumstances of one’s birth and upbringing. Humane circumstances can create a humane world where dog does not have to eat dog in the interests of survival and people learn to share even while they struggle together in the face of nature and other beings.

Vested interests are as real as acts of generosity performed without reason. People make a choice in being who they want to be; this is why those in power cannot be excused when they lie and commit acts of unforgivable violence against helpless populations. This, as Chomsky documented with staggering precision, is particularly true of American Foreign Policy in the Third World whose one-point agenda is “to crush independent nationalism and popular forces that might bring about meaningful democracy” (Chomsky, 2012).

Chomsky’s documentary style reporting follows a strategy which is as much literary as it is political. It is Orwell-like in the way it sees through what people in power say, what they in fact mean and what they actually do. Words mean different things especially when the ones in power use them. Terms like “free enterprise,” which are neither about freedom nor enterprise, in Chomsky’s words, refer “to a system of public subsidy and private profit, with massive government intervention in the economy to maintain a welfare state for the rich. In fact, in acceptable usage, just about any phrase containing the word “free” is likely to mean the opposite of its actual, literal meaning” (Chomsky, 2012). The encyclopedic scope of his exposure of contradictions in how brute power manages to suppress the smallest attempts to bring changes for a better living for the weak and powerless endow Chomsky’s work with an institutional quality.

In John Steinbeck’s novel East of Eden, as opposed to the cynical and the greedy, there is a man “whose effective life was devoted to making men brave and dignified and good in a time when they were poor and frightened and when ugly forces were loose in the world to utilize their fears” (Steinbeck, 1992). An academic can have strong views critical of the way things are without being revolutionary; if Chomsky’s work is revolutionary it is owing to his attempts to tell the truth in a way that empowers with hope those who are “poor and frightened” and make them believe in a life of dignity, especially when “ugly forces” are loose everywhere and do everything possible to exploit common fears and turn people into willing slaves.

Again, as the narrator in Steinbeck’s novel observes, “This man was hated by the few. When he died the people burst into tears in the streets and their minds wailed, “What can we do now? How can we go on without him?” (Steinbeck, 1992). Despite being hated by the few, Chomsky’s continuing relevance as a spokesperson for the defenseless from the Palestinian Territories in the Middle East to countries in Latin America plagued by violence and repression, not to mention his claim to a place in collective memory, comes from the simple fact that we would not know what to do if there were no Chomsky to tell us the truth about the sinister operations of power.

*Prakash Kona is a writer, teacher and researcher who lives in Hyderabad, India. He is Professor at the Department of English Literature, The English and Foreign Languages University (EFLU), Hyderabad.