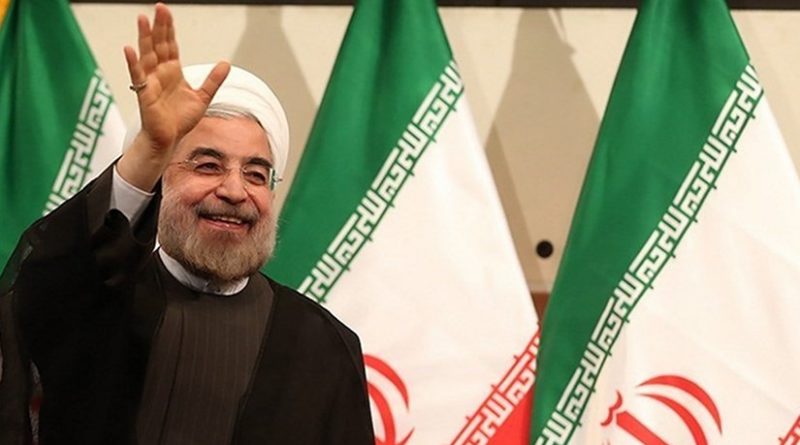 The United States enforces sanctions on authorities, entities and government institution based on U.S. foreign policy and national security goals against a wide array of targets, terrorists, and those engaged in activities related to the proliferation of weapons of mass destruction.

Sanctions have been a significant component of U.S. Iran policy since Iran’s 1979 Islamic Revolution that toppled the Shah of Iran, a U.S. ally. Trump Administrations have used sanctions extensively to try to change Iran’s behavior. Sanctions have had a substantial effect on Iran’s economy.

On Aug.6,2019 State department BUREAU OF NEAR EASTERN AFFAIRS reported to Congress List of  sanctioned Persons or entities Who Are Responsible for or Complicit in Certain Human Rights Abuses in Iran

Senior administration officials said that the designation was due to Zarif’s actions on behalf of Iran’s Supreme Leader Ayatollah Ali Khamenei, whom the administration sanctioned in late June.

Some in the West view Hassan Rouhani, the president of the Iranian regime, as a moderate figure. But Rouhani’s actions and history indicate to the exact opposite and prove that he is part the mullahs’ maligns behavior

Rouhani praised the Islamic Revolutionary Guard Corps (IRGC) for firing at the U.S. drone, and said, “we hit the drone with a system that is constructed in Iran, its missile is made by Iran, its radar is made by Iran, that is, we searched with our Iranian radar, we locked with Iranian radar, we targeted it with our Iranian missile … We kiss the hands of all those who created this domestic industry in the Ministry of Defense, the hands of all who used this tool well in the Revolutionary Guards.”

A few months after the nuclear deal, he confessed to leverage the presence in Syria and Iraq to get concessions in the nuclear talks. He said: “If our brave commanders did not stand in Baghdad and Samarra, and Fallujah and Ramadi, and if they did not help the Syrian government in Damascus and Aleppo, we would not have the security to be able to negotiate so well” (Feb. 8, 2016).

“Today, if we look at every corner in Afghanistan, Iraq, Syria, Lebanon, Palestine, everywhere, we see the footprint of the bravery of Commander [Qassem] Soleimani,” Rouhani said on May 10, 2016, adding that “the Islamic Revolutionary Guard Corps (IRGC) is present to defend our holy shrines in Iraq and Syria, to defend the oppressed in Lebanon, in Palestine, in Afghanistan, and other places that request assistance from the Iranian people and the Iranian government.” (Quds Force Tasnim News Agency, May 10, 2016).

“We built, are building now, and will build missiles… We do not hesitate to build, manufacture, store, and use when necessary to defend ourselves, any weapons of any kind that we need,” Rouhani said on October 29, 2017, in the clerical regime’s Parliament. He added that the United States disturbed the security of Syria, the security of Lebanon, the security of Iraq and the stability and security of Afghanistan, and wanted to “break down Iraq”, and we “went to help the Iraqi people, to help the Syrian people and we did not allow “the territorial integrity of Iraq to be undermined.”

As the secretary of the Supreme Security Council in 1999, he played a major role in suppressing the uprising of Tehran’s students and people.

Rouhani was the first official to force women to wear compulsory hijab at work, “I ordered all the women to wear a hijab at work… I issued an ultimatum that no woman is allowed to come to work without a hijab… The women protested and shouted. Someone said it’s impossible… I stood firm and obligated them to wear the hijab at work,” he proudly recalled in an interview.

Additionally, over 3000 people, including 91 women, were executed under Rouhani.

In the nuclear field, Rouhani wrote in his book “National Security and Nuclear Diplomacy”, that everything was going well in Natanz, and experts had planned to launch 54,000 centrifuges by March 2003, when the MEK press conference in the summer of 2002 created a fuss.

The Daily Telegraph wrote on March 5, 2006: In 2006, he (Rouhani) admitted that in negotiations with European Troika “how Tehran played for time and tried to dupe the West after its secret nuclear program was uncovered by the Iranian opposition in 2002.”

Rouhani’s statement and his history double the need to sanction Rouhani and place him on terrorist lists.

*Perviz S. Khazai is a law graduate and former Apprentice diplomat in French Ministry of Foreign Affairs- in IIAP(ENA)Paris, in United Nations in Geneva- In Red Cross International- In Council of Europe in Strasbourg and International Court of Justice in The Hague 1969-1971. He served as an international law expert of foreign affairs in Tehran 1976-1979. He served as the head of the mission and acting ambassador in Norway and Sweden in 1979-1982. He is now representative of NCRI in northern Europe.

Home » Rouhani Defends IRGC And Iran’s Malign Activities: He Must Be Sanctioned – OpEd

2 thoughts on “Rouhani Defends IRGC And Iran’s Malign Activities: He Must Be Sanctioned – OpEd”