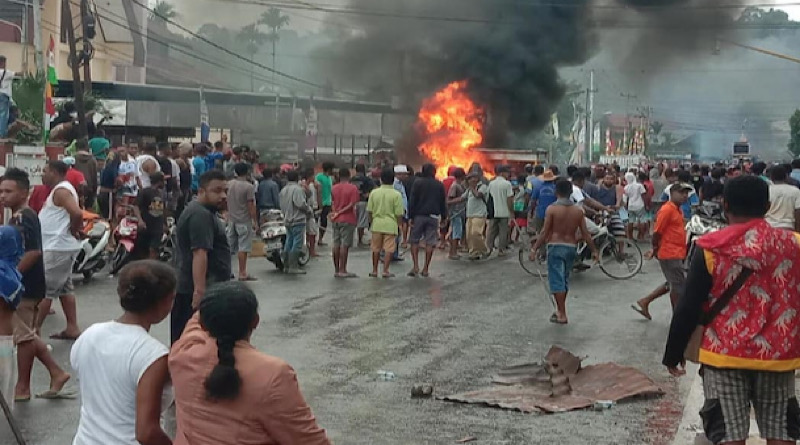 Papuan protesters in Manokwari in West Papua province watch after the provincial parliament building was set on fire on Aug. 19 after anger boiled over following the arrest of 40 students in East Java three days earlier. (Photo supplied)

Violent protests flared in Indonesia’s Papua region on Aug. 19 following the arrest and detention of dozens of students in East Java who were also reportedly mocked and abused by police.

In the West Papua capital Manokwari, a mob set fire to the provincial parliament and a number of other public buildings.Dedi Prasetyo, a police spokesman, said three police officers were injured during the violence.

The protests erupted following the arrest of 40 students living in the cities of Surabaya and Malang in East Java on Aug. 16, the day before Indonesia’s Independence Day celebrations. They were accused of throwing an Indonesian flag into a sewer, which they denied.

When they were arrested, police and bystanders allegedly called the students “monkeys,” “dogs” and “pigs,” according to a report by Indonesian news website Tirto.Tear gas was also fired in to their dormitories prior to their arrest, the website said.

The arrested students were released on Aug. 18, by which time outrage in Papua, where people have long complained of discrimination and rights abuses at the hands of Indonesian authorities, had emboldened protesters to take to the streets.

Papua Governor Lukas Enembe said the events prior to the Aug. 19 protest were “very painful” for Papuans. “Intolerant, racial and discriminatory actions should not exist in today’s Indonesia,” Enembe said.Home Affairs Minister Tjahjo Kumolo said he would summon the governors of Papua, West Papua and East Java to get to the bottom of the matter.

Religious groups and rights activists condemned the weekend arrests, saying it was a setback to efforts to end tensions in Papua.

Yuliana Langowuyo, deputy director of the Franciscan Commission for Justice, Peace and Integrity of Creation, said the students were treated in a “very degrading way.”

“Such racism and discrimination shows the failure of the state in protecting the rights of all citizens,” she told ucanews.com.Natalius Pigai, a Papuan activist and former member of the National Human Rights Commission, called on police to punish those involved in the student arrests.

“The police must move immediately to try and diffuse the situation,” he said.