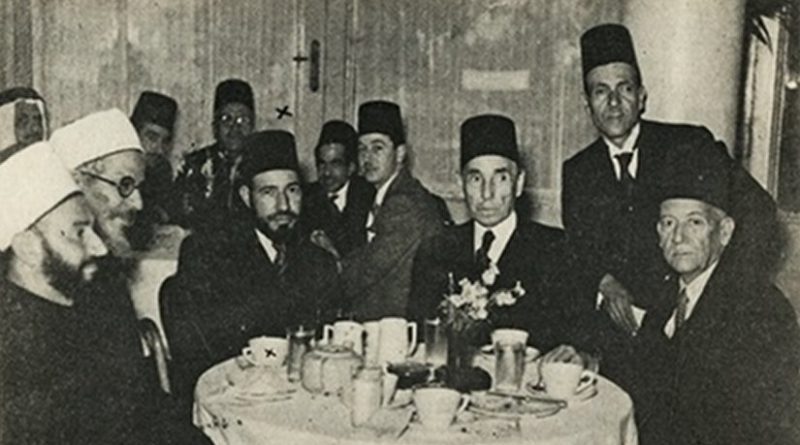 The Muslim Brotherhood was founded in 1928 by Hassan al-Banna (third from left). Photo: Wikipedia Commons

Dr. Hani Ramadan is an author and the director of the Islamic Center in Geneva, Switzerland where he also works as an Imam. He is the grandson of Hassan al-Banna, the founder of the Muslim Brotherhood and the older brother of Tariq Ramadan, a well known controversial intellectual. Hani’s father, Said Ramadan was a prominent figure in the Muslim Brotherhood in Egypt before he was exiled by Gamal Abdul Nasser in 1954. While his brother Tariq is often accused by his critics of practicing double talk, Hani is seen as a straight talker who never shies away from controversy. In 2002 Hani Ramadan created much controversy in Europe after he wrote an article in the French paper “Le Monde” defending stoning for adulterers. I was able to speak with him last week and asked him to share his thoughts on the recent events in Egypt.

NR: Can you give me your general impression on the events unfolding in Egypt right now? Did you expect a resignation of Mubarak?

Hani Ramadan: We were all surprised by what happened in Tunisia and Egypt. One can only rejoice to see two dictators fall. It’s a sign that the people in this region understand now the power they can have. Regarding the resignation of Mubarak, I had one certainty: that the revolution could only be stopped by his resignation.

NR: Do you trust the army to lead the country in this transition to free and fair elections in September? Is there a risk to see the army simply take over in Egypt?

Hani Ramadan: The risk exists. Especially since the army receives a considerable amount of aid from the US and that the Obama administration is completely dependent on the Zionist lobbies. However, the army has so far shown an exemplary restraint. It would be a mistake to impose a new dictatorship now.

NR: Do you think that there is a risk of a witch-hunt against the people who benefitted from the Mubarak regime?

Hani Ramadan: There is a distinction between those who engaged in corruption and those who simply received a favorable financial position. Justice must be done. However, no one would want to see bloodshed in Egypt or Tunisia. We must move towards reconciliation with the respect of the popular will and equal treatment of citizens.

NR: Many observers in America like to compare the movement in Tunisia and Egypt with the popular movement in Iran. Is it a fair comparison in your opinion?

Hani Ramadan: Many wrongly demonize the Iranian regime. It is, in my opinion, infinitely more respectable than the Zionist state – which massacres Palestinian civilians. That said, Turkey’s example shows that we can reconcile the values of Islam and the positive achievements of the West. But there will be variations from one country to the other. The revolution will be run according to local conditions and cultural specificities.

NR: Going back to Egypt, in your opinion, who are the true leaders behind the revolution? It was very well-disciplined and organized.

Hani Ramadan: The best answer is one that was recently given by the guide of the Muslim Brotherhood, Dr. Muhammad Badi: “We confirm that this revolution is the blessed revolution of the Egyptian people as a whole. It is not animated by a party, an organization or a clan, and though all participated, none can claim to take the reins alone, or claim to be its representative alone”

NR: What is the difference between today’s Muslim Brotherhood movement and the movement in the time of your grandfather in the 40’s 30’s ? How has it changed? Has it become more plural and more open to Western values?

Hani Ramadan: The movement has gained a valuable experience since. But it remains completely faithful to the guidelines set out in its infancy. Its current leader, Dr. Muhammad Badi ‘said today: “We have said repeatedly that we do not want power or leadership or senior positions. We do not aim to become a majority in Parliament. Our only goal is a comprehensive reform in political, economic and social spheres, in the areas of education, information and all aspects of life”. Hassan Al-Banna had the same discourse. The movement is open to all persuasions, and is very attentive to young people.

NR: In your opinion if the Muslim Brotherhood has a strong position in parliament or if their presidential candidate is elected, do you think the future government will respect the Egyptian peace treaty with Israel?

Hani Ramadan: We need a just and lasting peace in the region. This will only occur if the borders of the State of Israel are determined. The problem is that Israel continues to build settlements. Obama is not even capable of asking for a freeze.

NR: What is the ideal democratic system for Egypt? Can we have an Egypt following the Turkish model?

Hani Ramadan: Each country has its specific cultural and historical context. We have to be cautious when we try to compare. Having said that, if Turkey is maybe not a model it could be at least an excellent example.

NR: What are the next regimes to fall after Egypt?

Hani Ramadan: Now anything is possible. You only need people who decide that their autocratic regime must go.

NR: Thank you for your time.

Nicolas Rossier is an award winning independent filmmaker and reporter who lives in Brooklyn, New-York. His works have appeared in prestigious venues around the world, aired on domestic and international television and radio as well as featured in the New York Times, the Boston Globe, Cineaste Magazine, Variety, the Jewish Forward among others.

One thought on “Revolution In Egypt: Interview With Grandson Of Muslim Brotherhood Founder Hassan al-Banna”