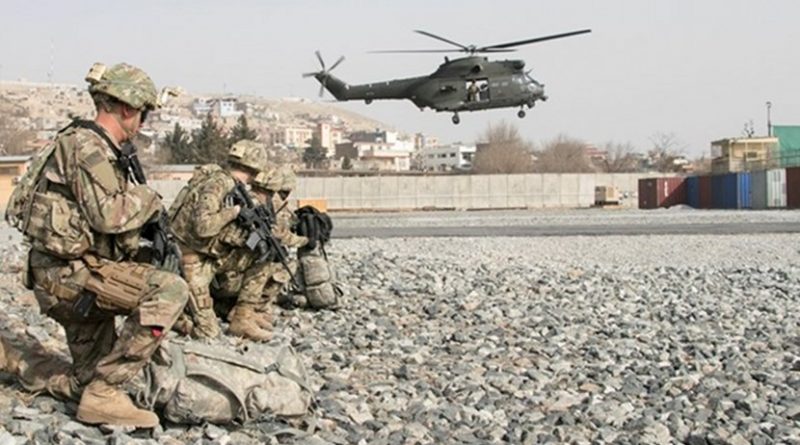 On February 13, 2018, 43 Taliban terrorists were killed and another 20 were injured in clashes with ANDSF in the Nish District of Kandahar Province.

On February 12, 2018, 20 IS terrorists were killed in air and ground attacks conducted by ANDSF in Rodat, Hasaka Mina and Achin Districts of Nangarhar Province.

On February 11, 2018, 11 Taliban terrorists, including a ‘local commander’ identified as Mawlavi Mir Wali, were killed and another five were injured during the Pamir-18 Operations conducted by ANDSF in Darqad District of Takhar Province.

On February 7, 2018, 10 IS terrorists were killed in air-strikes conducted by B-52 Bombers of the United States (US) in the Sar Dara area of Darzab District in Jowzjan Province.

On February 6, 2018, 28 IS terrorists were killed in an air-strike conducted by the US Forces in the Sarud area of Darzab District in Faryab Province.

According to the Special Inspector General for Afghanistan Reconstruction (SIGAR)’s 36th Quarterly Report released on July 30, 2017, between January 1, 2017 and May 8, 2017, there were 2,531 ANDSF service members killed in action and an additional 4,238 wounded in action. However, the Quarterly Reports of SIGAR subsequently released on October 30, 2017, and January 30, 2018, did not provide ANDSF casualty figures, and so there is no data available for the rest of 2017. The US Department of Defense (DoD) instructed SIGAR not to publish data on “fundamental metrics of ANDSF performance as casualties, attrition, and most capability assessments” in its reports. It similarly “instructed SIGAR not to release to the public data on the number of Districts, and the population living in them, controlled or influenced by the Afghan government or by the insurgents, or contested by both.” SIGAR had consistently reported ANDSF casualties since January 2015, when ANDSF took over operational control. According to SIGAR, 6,785 ANDSF members were killed between January 1 and November 12, 2016 as against 5,000 ANDSF fatalities recorded during the same period in 2015 (no data is available for the remaining period of 2015 and 2016).

Disturbingly, on November 19, 2017, lawmakers raised concerns over the reluctance of young people to join ANDSF and asserted that this was rooted in Government’s failure to address the problems facing soldiers. According to lawmakers, not paying salaries on time, no days off, the lack of equipment, and threats by insurgents against families of soldiers, were some of the reasons preventing youth from joining ANDSF. Taliban pressure is taking a serious toll, with officials in some Provinces reporting recruitment down by as much as 50 per cent. Admitting a partial drop in recruitment, General Mohammed Ibrahim, the Commander of the Afghan Army’s National Recruitment Center in Kabul, stated on November 18, 2017, “In the first six months of this year (2017), we recruited 13,000 personnel, but we are planning to recruit 25,000 in the second six months. We do face challenges in recruiting enough personnel, I cannot hide that.” The Force had recruited 37,000 men in 2016 and 42,000 in 2015. Taliban pressure includes fines on families of soldiers, physical punishment of soldiers who return home, and even confiscation of land and homes.

Afghanistan’s principal problem, however, remains Pakistan. Exposing Islamabad’s role, on December 17, 2017, the US Department of Defense, in its report to the US Congress, observed,

Although Pakistani military operations have disrupted some terrorism sanctuaries, certain extremist groups such as the Taliban and the Haqqani Network retain freedom of movement in Pakistan. The United States continues to convey to all levels of Pakistani leadership the importance of taking action against all terrorist and extremist groups.

Similarly, Afghanistan’s National Directorate of Security (NDS) Chief Mohammad Masoum Stanikzai noted, on January 28, 2018, that Afghanistan’s war was complicated and that insurgent groups were backed by foreign countries, especially Pakistan. Further, President Ashraf Ghani, in an address to the nation on February 2, 2018, declared, “Pakistan is the center of the Taliban. We are waiting for movement. Word and process are the words on paper; the Afghan nation wants clear practical action.”

Presently, according to a survey entitled ‘Peace Stalemate and Solutions’ conducted in six Provinces including Kabul, Herat, Kandahar, Balkh and Kunduz, by the Center for Strategic and Regional Studies (CSRS), most Afghans see an Afghan-led peace process as the only solution. The survey result released on December 2, 2017, revealed that 90.2 per cent of the respondents believe that an Afghan-lead peace process can bring peace the country. Amid ambiguity in the peace talks between the Afghan Government and the Taliban, on December 25, 2017, the High Peace Council (HPC) opened a two-day conference of religious scholars in Kabul in an effort to pave solid grounds for peace with the insurgents. The HPC invited more than 700 religious scholars from across the country. At the end of the conference, on December 26, 2017, a number of religious scholars suggested that President Ashraf Ghani should consider allowing the Taliban to open a political office in Kabul.

To pave the ground for official talks between the two sides on January 14, 2018, Afghan Government representatives held the third round of unofficial talks with five Taliban members in Turkey. Humayun Jarir, a representative of the Afghan Government in the talks, disclosed that the Taliban members represented the Quetta Shura, Haqqani network and other factions of the Taliban. Meanwhile, Mawlawi Abdul Rauf, the Taliban leader who headed the peace talks delegation in Turkey, told Tolo News on January 15, 2018, “We represent the overall Taliban of the Islamic Emirate except some of individuals who are not willing to opt for intra-Afghan peace talks and who want to talk through Americans. I want to say that we represent the Taliban in this meeting and this is the third peace talks meeting here in Turkey. It is a fundamental meeting.” The first and second rounds of Government-Taliban negotiations were held in Turkey in 2017.

Crucially, following the announcement of US President Donald Trump’s new “South Asia strategy” on August 22, 2017, the number of airstrikes against insurgents has increased significantly. According to the US Air Force figures, 4,300 bombs have been dropped by US troops in Afghanistan in 2017, targeting Taliban and other terrorist groups in various parts of the country. The number of airstrikes in 2017 was twice the cumulative strikes carried out over the preceding two years – 2015 and 2016. Further, as part of the US Administration’s broader efforts to disrupt terrorist fundraising, on February 8, 2018, the US Department of the Treasury imposed sanctions against three individuals, Rahman Zeb Faqir Muhammad, Hizb Ullah Astam Khan and Dilawar Khan Nadir Khan, for allegedly having connections with Pakistan-based terror outfits operating in Afghanistan. In 2015, Hizb Ullah Astam Khan was involved in sending shipments of improvised explosive device (IED) chemicals from Pakistan to Afghanistan to terror groups, including Taliban and Jamaat ud Dawa al-Quran. In mid-2014, Rahman Zeb Faqir Muhammad was involved in operations of the Lashkar-e-Taiba (LeT) in Afghanistan. In 2013, Dilawar Khan Nadir Khan provided financial and material support to LeT and the Taliban.

Under pressure from a stepped-up Trump administration military campaign, Taliban spokesman Zabihullah Mujahid released a 10-page letter in several languages, on February 14, 2018, declaring: “If you want peaceful dialogue with the Afghans specifically, and with the world generally, then make your president and the war-mongering congressmen and Pentagon officials understand this reality and compel them to adopt a rational policy towards Afghanistan.” The new letter by the Taliban group has been issued almost a month after President Trump rejected the possibility of early talks with the Taliban, following a series of deadly attacks in Kabul and other parts of the country.

I don’t see any talking taking place. I don’t think we’re prepared to talk right now. It’s a whole different fight over there. They’re killing people left and right. Innocent people are being killed left and right. Bombing in the middle of children, in the middle of families — bombing, killing all over Afghanistan. So we don’t want to talk with the Taliban. There may be a time, but it’s going to be a long time. We’re all out, and that’s taking place right now, and it’s a whole new front. And it’s a whole new set of principles that we’re being governed by.

Significantly, on January 14, 2018, a 15-member delegation of the United Nations Security Council (UNSC) held talks with the Afghan Government leadership, where they reportedly discussed a wide range of issues, including security and ongoing developments on the political front. Meanwhile, North Atlantic Treaty Organization (NATO) Secretary General Jens Stoltenberg observed, on February 13, 2018, “At least twenty-eight allies and partners are increasing their troop contributions to our training mission in Afghanistan. We are aiming to have close to 16,000 Personnel there this year, up from around 13,000 last year.” Further, on February 15, 2018, Stoltenberg asserted that the Taliban had to understand that they will never win on the battlefield and urged them to come to the negotiating table and agree to a political solution.

After the withdrawal of an overwhelming proportion of NATO Forces by end 2014, Afghan Forces have been reeling under escalating Taliban attacks. It is difficult, at this early stage, to assess whether Trump’s Afghan strategy will actually achieve its promised ends. Nevertheless, Washington’s renewed commitment to stay the course, add additional resources, take the fight to the enemy, and end Pakistan’s double game, represent a qualitative shift of potentially great importance. If implemented aggressively, adjusted as necessary and sustained over time, this strategy improves probabilities of an acceptable resolution to Afghanistan’s unending troubles.