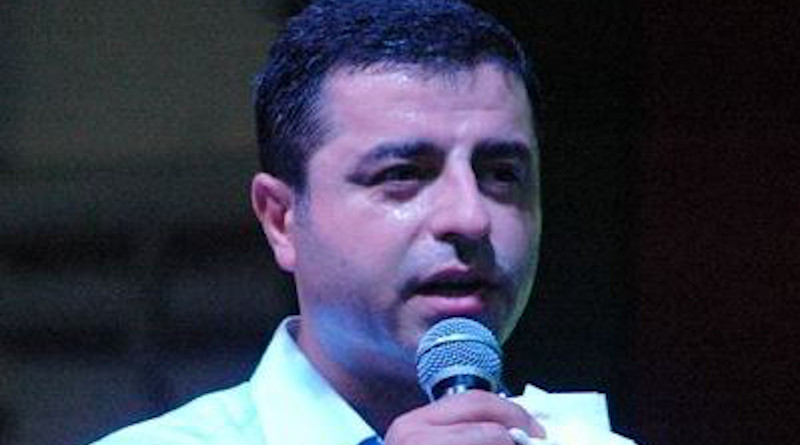 The Constitutional Court of Turkey announced on Thursday night that it had ordered the release of former presidential candidate and co-leader of the pro-Kurdish Peoples’ Democratic Party (HDP) Selahattin Demirtas.

The court ruled that Demirtas’ right to liberty had been violated because his detention had exceeded “a reasonable time,” and ordered that compensation of TL50,000 ($7,289) be paid to Demirtas.

The surprise ruling followed several calls from the European Court of Human Rights (ECHR) for the release of Demirtas, who is accused by the ruling Justice and Development Party (AKP) of having links to the outlawed Kurdistan Workers’ Party (PKK) — an accusation denied by both Demirtas and the HDP.

The Kurdish leader — who has been in prison since 2016 on terror charges carrying a sentence of up to 142 years — will not be set free immediately though, as he is now being held in relation to a case pertaining to Kurdish protests in October 2014, despite not being named as a suspect in that investigation.

Human rights activists say the court’s Thursday ruling is a tactical move to alleviate mounting pressure from the Council of Europe — a human rights organization of which Turkey is a founding member — over the high-profile case, which is still pending before the ECHR’s Grand Chamber. While the ECHR stated in November 2018 that Demirtas’ detention was not justified, it will not usually issue an official verdict on a case until all avenues of the relevant domestic judicial system have been exhausted.

Demirtas — who has been called ‘the Kurdish Obama’ — was a robust challenger to Turkish President Recep Tayyip Erdogan during Turkey’s June 2015 elections, managing to extend the HDP’s traditionally limited Kurdish constituency by reaching out to liberal and left-wing Turkish voters, which resulted in the pro-Kurdish party gaining parliamentary representation for the first time.

However, the charismatic leader’s rapid ascent stopped in November 2016 when he was jailed.

“This ruling of the Turkish top court confirmed once again the need to release Demirtas immediately. However, it is unlikely that it will happen soon under today’s circumstances in the judiciary,” Erdal Dogan, a human rights lawyer, told Arab News.

“This case is politically motivated. However, if the ruling government opts for a democratic approach to the Kurdish conflict, it will have to release Demirtas and hundreds of HDP officials. It is a matter of making choices,” he continued, adding that the situation is further complicated for Ankara by the cross-border situations in Syria and Libya and its ongoing standoff with Russia.

“Demirtas should not spend one single minute behind bars but unfortunately his case is related to so many national and international dynamics (that have) to be negotiated,” Dogan said.

Demirtas has been suffering from health issues related to his heart in prison, but Turkey’s recent ruling allowing the release of 90,000 prisoners to ease overcrowding in jails and protect prisoners from the COVID-19 pandemic excluded those jailed over terrorism charges, so he remained incarcerated.

Amnesty International recently launched a campaign for the release of political prisoners in Turkey amid the pandemic, warning that their lives might be at risk highlighting its concerns about the health precautions the Ministry of Justice has put in place during the pandemic.

Andrew Gardner, senior Turkey researcher for Amnesty, told Arab News that the organization is monitoring the situation. A new report by the Human Rights Association has echoed Amnesty’s concerns, saying that conditions in the prisons during the pandemic are worrying.

The Amnesty researcher also noted that it has long been clear that the cases against Demirtas — which Gardner described as “baseless” — are politically motivated and that the government has used them to try and silence him and intimidate his followers.

“The Turkish government is facing increased pressure over its policy of locking up critics — not only Demirtas, but also activist-philanthropist Osman Kavala and many others. After this ruling, the Council of Europe can further question Turkish authorities about why Demirtas is still in prison,” Gardner said.

“It is good to have this verdict, because this case was a total violation of the rights (regarding) pre-trial detention, (combined) with the pandemic that threatens people’s health,” he continued. “The constitutional court should be much more active in these cases. It is disappointing that it took so long to give this ruling. Demirtas should never have been imprisoned.”