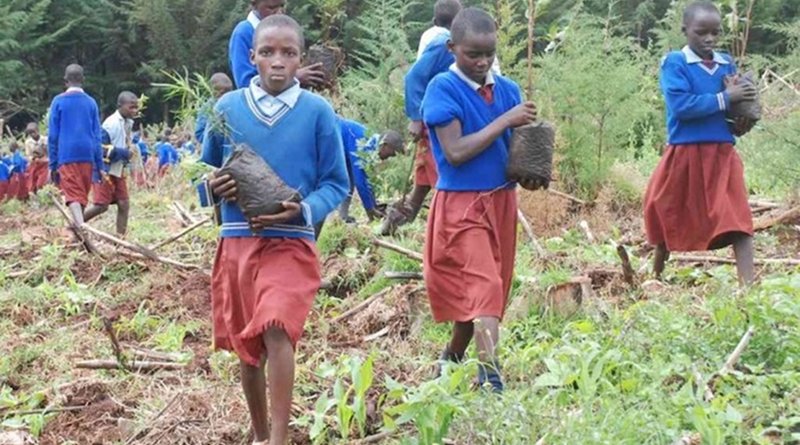 Since independence, natural resources in Kenya have been on a fast track to extinction. Today, nearly half of all its forests are gone, resulting in more droughts, floods and other dire consequences for communities, ecosystems, food security and infrastructure.

From 10% of the country covered in forest in 1963, noted Kaluki Paul Mutuku, Youth4Nature Regional Coordinator, Africa Group, only 6% was covered in 2009.

The nation’s forests have been victims of agricultural expansion, unregulated logging and urbanization.

In 1977, deforestation moved from the back page to the front page with the launch of the Green Belt Movement by Kenyan environmentalist Wangari Maathai. Its mission was to plant trees across Kenya to fight erosion and to create firewood for fuel and jobs for women.

Some 30 million trees were planted by some 900,000 Green Belt women who were paid a few shillings for their work. For her initiative, Maathai went on to become the first African woman to win a Nobel Peace Prize for “her contribution to sustainable development, democracy and peace”.

Maathai passed away in 2011 but her campaign did not die with her. This year, urgent calls to save the forests were again in the news with a highly-critical open letter signed by UN staffer Gabriel Rugalema and economist Susan Mugwe.

“Kenya must move fast to reverse deforestation,” was the heading of their piece published by Business Daily of Kenya.

“Currently, we are losing 50,000 hectares of forest each year – primarily due to the emergence of an expanding affluent society that wants to dine on steak, drive cars, recline on comfortable seats, live in elegant houses and consume fresh fruits and vegetables. To meet this demand, commercial agriculture for products such as livestock, horticulture, timber and rubber are increasingly encroaching on forest lands,” they wrote.

“If we do nothing to reverse it, Kenya shall be a complete desert in 113 years,” they warned.

Meanwhile, an informal study by Professor Julius Huho of Garissa University had dismaying news about the state of environmental studies in centers of academic learning.

“Students didn’t seem interested in learning about climate change,” Huho recalled. “They attributed its relevance just to farming activities. Only 14.9% thought it should be included in all levels of education (primary to universities). In secondary schools, learners should have a deeper understanding of global warming and climate change and how it can be dealt with.”