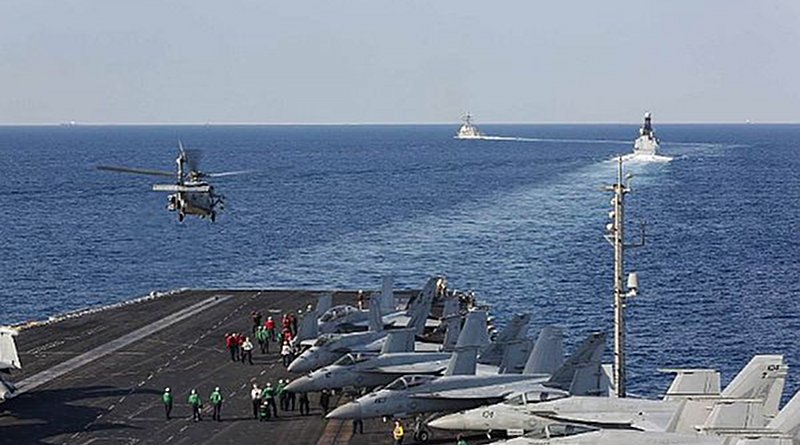 The United States’ Abraham Lincoln Carrier Strike Group completed a scheduled transit through the Strait of Hormuz and into the Arabian Gulf Nov. 19, according to a statement issued by the US Navy.

The Strait of Hormuz is one of the busiest shipping lanes in the world, with one-fifth of the world’s energy supply transiting the strait annually. This waterway is critical to ensuring and safeguarding the stability of global commerce, the statement noted.

“I’m incredibly proud of the Abraham Lincoln Strike Group Sailors and the professionalism they have demonstrated throughout this deployment,” said Rear Adm. Michael Boyle, commander, Carrier Strike Group 12. “Especially in evolutions like a Strait transit, where detailed planning, precision navigation and the proficiency of our warfighting teams are on full display.”

According to the US Navy, the Abraham Lincoln Carrier Strike Group’s presence in the US 5th Fleet area of operations since May demonstrates the United States’ and its regional partners’ commitment to the free flow of commerce, regional maritime security and freedom of navigation.

“A carrier brings immense capabilities wherever it goes,” said Capt. Walter Slaughter, commanding officer of USS Abraham Lincoln, the flagship of the Carrier Strike Group. “We place ourselves where we need to be, when we need to be there, in order to meet the full range of maritime security requirements of the mission at hand.”

The US 5th Fleet AOO encompasses about 2.5 million square miles of water and includes the Arabian Gulf, Gulf of Oman, Red Sea and parts of the Indian Ocean. The expanse comprises 20 countries and includes three critical choke points at the Strait of Hormuz, the Suez Canal and the Strait of Bab al Mandeb at the southern tip of Yemen, according to the US Navy.

The Abraham Lincoln Carrier Strike Group is deployed to the US 5th Fleet AOO in support of naval operations to ensure maritime stability and security in the Central Region, connecting the Mediterranean and the Pacific through the western Indian Ocean and three strategic choke points. With Abraham Lincoln as the flagship, deployed strike group assets include staffs, ships and aircraft of CSG 12, Destroyer Squadron 2, USS Leyte Gulf and Carrier Air Wing 7.