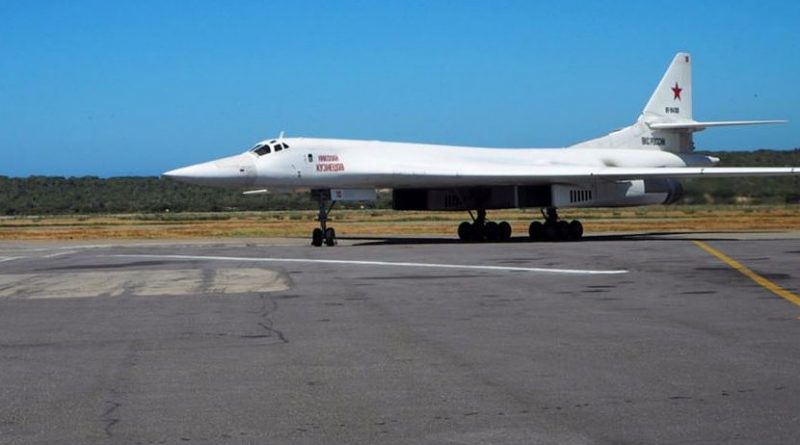 As Washington is determined to leave the landmark INF Treaty, it seems Moscow is looking for a response. Russian media has cited diplomatic sources as saying that Moscow is eyeing a strategic air base off Venezuela’s coast.

The arrival of two Russian Tu-160 strategic bombers to Venezuela earlier this month has provoked a nervous reaction from Washington and led to a brief heated exchange between the US and Russian officials. This might have been a prelude to a more ambitious endeavor, Russia’s Nezavisimaya Gazeta (NG) daily revealed, citing military and diplomatic sources.

Sources told the paper that Moscow seeks to create a semi-permanent base for the Russian long-range aviation on one of Venezuela’s islands in the Caribbean Sea as it prepares for “long-time military presence” the US ‘backyard’.

The base was allegedly planned to be established on the Orchila Island located in the Caribbean Sea some 160 kilometers away from the Venezuelan capital of Caracas. The isle hosts a Venezuelan airfield and a Navy base and was already visited by the Russian military ten years ago. The late Venezuelan leader Hugo Chavez even offered Russia to set up an air base there back in 2008, the NG reported, adding that Moscow hesitated to make such a decision at that time.

Ten years on relations between Russia and the US are at their arguably lowest point since the Cold War. Washington is seeking to withdraw from key arms control agreements, including the Intermediate-Range Nuclear Forces Treaty (INF), which bans all short and mid-range ballistic missiles. The US plans provoked a strong reaction from Moscow, saying it would ‘take measures’ if any new American missiles threatening its security are placed in Europe.

Path to stability or crisis?

An air base in Venezuela capable of hosting the Russian strategic nuclear-capable long-range bombers might well be one of such retaliation measures, experts believe. “It cannot be ruled out that if all the agreements [under the INF Treaty] are disrupted we will have to take both symmetric and asymmetric steps to ensure stability,” Andrey Koshkin, the head of the chair of sociology and political sciences at the Russian Plekhanov University of Economics, told RT, adding that such a base would be a good option in this regard.

Leaving the INF Treaty would potentially allow the US to deploy nuclear missiles to Europe, posing a threat to Russia, the experts warned, suggesting that getting into the US “backyard” might be the only viable response for Russia. However, with each side raising the stakes, the situation might get dangerously close to something close to a military standoff between the two great powers.

“This might become a prelude to something similar to a Caribbean Crisis,” Konstantin Sivkov, a retired Navy officer and a military analyst, told RT.

Still, the situation is anything but certain yet. Russian officials have not commented on the issue and Caracas openly denied reports about a potential ‘Russian base’ on the Venezuelan soil.

Venezuelan officials, however, indicated they were more than willing to consider such an option. “I wish it were true but it is not,” the president of Venezuela’s Constituent National Assembly, Diosdado Cabello, told journalists, when asked about the base.

“We want to go beyond usual military technical cooperation,” Venezuela’s Defense Minister Vladimir Lopez told his Russian counterpart Sergey Shoigu as early as in April, adding that the two countries should “develop cooperation at an operational level.”

A major obstacle is that the Venezuelan laws do not allow permanent foreign presence on the country’s soil but Moscow and Caracas seemingly found a way to overcome it. The Russian bombers are reportedly expected to be deployed to the island on a rotational basis instead of being permanently stationed here, according to NG source.

Shoigu has so far only confirmed that the Russian military aircraft will continue to fly to Venezuela while the Russian Navy vessels might also use its ports.

However, located far away from the Russian territory, Moscow would likely need a full-scale military facility, Sivkov said, adding that a small installation would not be enough to support Russia’s operations in the area. “It might be initially reduced to a limited presence at a level of a flying squadron or an air regiment,” he said, adding that the Russia would then likely increase its presence by building fuel and munitions depots as well as deploying air defense systems to the area and making the Venezuelan installation potentially similar to Russia’s Syrian Khmeimim base.

The arrival of just two Russian Tu-160 strategic bombers for drills in Venezuela has already jangled nerves in Washington and provoked a wave of hysteria in the Western media. Some even closely examined the potential base location using satellite photos and called it “an unprecedented standing strategic threat to the mainland United States within the Western Hemisphere.”