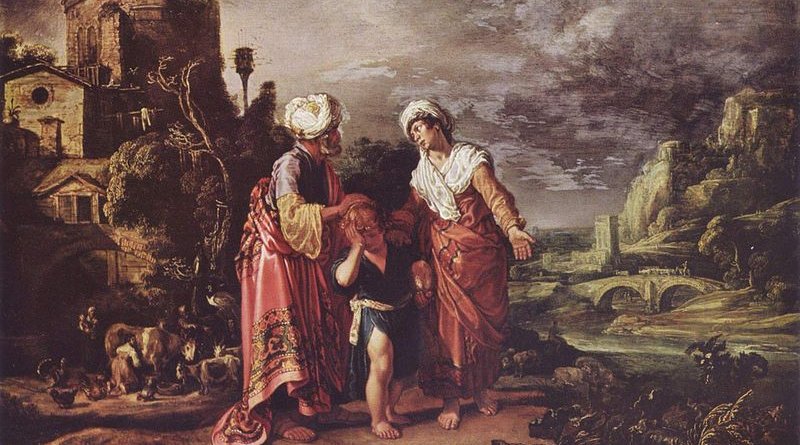 The dismissal of Hagar, by Pieter Pietersz Lastman.

For over a decade I have written more than 70 articles about positive Islamic-Jewish connections that have been posted on Muslim websites. And for 25 years, Rabbi Ron Kronish, the Founding Director the Interreligious Coordinating Council in Israel (ICCI) has been doing such work in Israel. He has recently written the following article, which I am going to elaborate upon. Every year Jews in synagogues worldwide read Genesis chapters 21 and 22 on the first and second days of Rosh Hashanah; the Jewish New Year Festival.

Rabbi Kronish writes: “I have always been mindful that on these very special days—our “High Holidays”—we read about [Prophet Ishmael as well as [Prophet] Isaac. Reading about the patriarch of the Arab people is part of our Jewish tradition because these foundational events are essential to our identity as Jews. Chapter 21—the story of the birth and banishment of Ishmael—establishes our Jewish connection to all of God’s non-Jewish children.

“When God saw that Ishmael was suffering and about to die, the text tells us that the Tawhid God of the Hebrew Bible hears the voice of all children, including Ishmael, where they are at, in their existential situations, in their suffering and misery, as well as in their joyous and hopeful moments, anywhere in the world. This is a universal God, as we learned earlier in Genesis, whereby every human being is created in the image of God.

“Rabbi Harold Kushner, the editor of the Conservative movements Etz Chaim commentary on the Torah, offers this poignant commentary on this verse: “Isaac and Ishmael are reunited at their father’s funeral, a sign that Ishmael has changed his ways and matured. Although he could not have forgotten how his father treated him; Prophet Ishmael had [long ago] forgiven Abraham for having been a less-than-perfect father.”.

Islamic and Jewish tradition both agree that Prophet Abraham visited Prophet Ishmael’s distant home on at least two different occasions to make sure that his family relationships were suitable.

These pre and post funeral reconciliations would be why the Torah describes Abraham as ‘contented’ in his old age. Can we see this as a very good model for family reconciliations [today by] forgiving old hurts? And can it also become a model for the descendants of Prophet Ishmael and Prophet Isaac, contemporary Arabs and Israeli Jews, to find the grounds to attain post military funerals, forgiveness, and reconciliation?

“Can the descendants of Isaac and Ishmael reconcile with each other, and reduce the number of  funerals [in the Middle East]? In other words, can Jews and Muslims in the contemporary world coexist with one another? In Israel? In America? Wherever Jews and Muslims are living in the same communities, countries and regions?”

Rabbi Kronish’s answer is Yes. “But it is not that simple. Jews and Muslims have to overcome some deeply ingrained negative stereotypes of each other. Some of this comes from our understanding –or purposeful misunderstanding — of our sacred texts, which can be very problematic and often lead to negative stereotyping.

Some of it comes from our limited understanding of our histories, which are often inaccurate and incomplete. Much of it comes these days from the mainstream media and from social media, which often spread disinformation about each other’s religions and cultures viciously and virally in very destructive ways.”

Rabbi Kronish’s message in his November 26, 2019 Times of Israel blog post is brief and clear: “I believe that it is morally imperative for the descendants of Isaac and Ishmael to find ways to coexist and cooperate for the common good for 3 reasons:

First, both Qur’an and Torah teach us that this is the correct thing to do.

Second, our understanding of history should help us understand why this is essential now.

And third it is in our enlightened self-interest to do so.

It is time to choose reconciliation rather than retribution between Jews and Muslims in this world. The time for enmity is over. It is time to find another path, one of coexistence and cooperation, for the benefit of all concerned.”

And I would add to the words of Rabbi Kronish that the Qur’an states: “No good is there in much of their private conversation, except for those who enjoin charity, or [doing] that which is right, or [encouraging] reconciliation between people. And whoever does that, seeking means for the approval of Allah ; We are going to give him a great reward.”  (4:114)

Everyone knows how important fasting during Ramadan, and daily worship and prayer are in Islam; but few know that Islam considers reconciling people better than many acts of worship. Prophet Muhammad said: “Should I not tell you what is better in degree than prayer, fasting, and charity?” They (the companions) said: “Yes.” He said: “Reconciling people, because grudges and disputes are a razor (that shaves off faith).” (Ahmad, Abu Dawood, and At-Tirmithi)

Even more amazing the Prophet of Tawhid said: “The one who reconciles people is not considered a liar if he exaggerates what is good or says what is good.” [Ahmad] This is an excellent guide to dealing with the three-generation old Israeli-Palestinian conflict. Rather than focusing mostly on what the other side did to us, we all should focus on how the conflict has hurt all of us, and how much better our future would be if we could live next to each other in peace.

And as the Qur’an states: “’Believers, be steadfast in the cause of God and bear witness with justice. Do not let your enmity for others turn you away from justice. Deal justly; that is nearer to being God-fearing.” (5:8)

And according to a 7-8th century midrash; the non-Jewish Prophet Balaam said: Of the seventy linguistic communities [nations] that the Holy One created in  the world; God did not put His name on any one of them except on Israel; and the Holy One, agreed to made the name of Ishmael similar to the name of Israel” (Pirkei DeRabbi Eliezer 30) in that both Israel and Ishmael end in ‘el’ which is the generic Semitic name for God.

Then all the children of Prophet Ishmael and Prophet Isaac will learn to live in Holiness, Peace and Prosperity. And as Prophet Isaiah predicted (19:23-25): “On that day there will be a highway from Egypt to Assyria. The Assyrians will go to Egypt and the Egyptians to Assyria. The Egyptians and Assyrians will worship together. On that day Israel will be the third, along with Egypt and Assyria, a blessing on the earth. The Lord Almighty will bless them, saying, “Blessed be Egypt my people, Assyria my handiwork, and Israel my inheritance.”

From this we learn that the miracle of brotherly reconciliation can often unite rival brothers in a win-win resolution; and it can occur again in our own lifetimes if the descendants of Prophet Isaac and Prophet Ishmael negotiate a settlement that reflects the religious policy that “…there is no sin upon them if they make terms of settlement between them; and settlement[reconciliation] is best.} (Quran 4: 128)

Rabbi Dr Ron Kronish is the Founding Director the Inter-religious Coordinating Council in Israel (ICCI), which he directed for 25 years. His new book, The Other Peace Process: Inter-religious Dialogue, a View from Jerusalem, was published by Hamilton Books, an imprint of Rowman and LIttlefield, in September 2017.