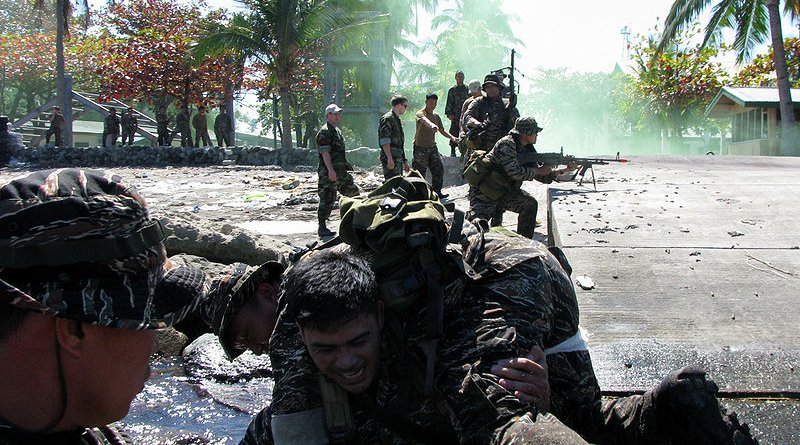 By Mico A. Galang*

On October 31, 2018, Philippine Department of National Defense (DND) Assistant Secretary for Plans and Programs Angelito M. De Leon presented a copy of the country’s National Defense Strategy (NDS) to Defense Secretary Delfin N. Lorenza during the agency’s 79th founding anniversary. Described by DND as the Manila’s “first ever” NDS, the strategy document only became publicly available online in August 2019. The time horizon of the NDS is from 2018 until 2022, the year President Rodrigo Duterte’s term expires. As the Duterte administration enters its final two and half years in office, two questions on the strategy document may be raised: 1) how does the NDS relate to other security-related documents?; and 2) what does the NDS mean for Manila’s defense and security relations in the Asia-Pacific region?

The NDS is anchored on two previously released policy/strategy documents under the Duterte administration—2017 National Security Policy (NSP), and 2018 National Security Strategy (NSS). The NSP outlined, in broad strokes, the overall national security objectives of the government. The NSS, on the other hand, categorized the Philippines’ national security interests into “core,” “important,” and “other.” These interests were then harmonized into national security goals from which broad strategic courses of action were identified. The NDS “maps the planning, prioritization, and resourcing processes of the [DND] in line with the identified priorities and outcomes of the NSS.” Indeed, the NDS identified six of the twelve national security goals which are most relevant to DND’s mandate. Among others, these national security goals include: 1) safeguard and preserve national sovereignty and territorial integrity; 2) ensure maritime and airspace security; and 3) strengthen international relations. Anchored on the relevant national security goals, the NDS identified two categories of defense missions: external, and internal. The external defense missions are: 1) Maritime and Air Defense Mission (MarAD); 2) Cyber Security Mission (CS); and 3) Security Cooperation and Engagement Mission (SCE). The NDS will also serve as the basis for the crafting of the National Military Strategy (NMS) by the Armed Forces of the Philippines (AFP) to ensure “coherence and alignment of important strategies for a more effective and collective response to national security threats.”

Cognizant of the interrelatedness of Philippine security policy/strategy documents, it appears that the NDS has three major implications for Manila’s defense and security relations in the Asia-Pacific region. First, the NDS strategic environment assessment situated the country’s external politico-security challenges within the broader purview of the U.S.-China geostrategic competition, a phenomenon that will likely shape the dynamics of Asia-Pacific in the foreseeable future. Like NSP and NSS, the NDS underscored that the “overall strategic backdrop and geopolitical landscape of the Asia-Pacific lies on the U.S.-China rivalry, which proves to be a vital consideration for the strategic decisions of the country.”  As the “maritime heartland of Southeast Asia,” the South China Sea (SCS) “is crucial to the security and economy of the region.” The NDS also underscored that sea lanes of communication (SLOCs) “must be kept open and that freedom of navigation [in] and overflight [above] the SCS must be ensured.” In this context, the NDS stressed that Manila “views the massive construction of artificial islands in its maritime areas in the SCS, which may be used as military bases, as a grave threat to its national security.” As such, echoing NSP and NSS, the NDS stressed that the dispute in West Philippine Sea (WPS), part of the broader SCS, is the “foremost security challenge to Philippine sovereignty and territorial integrity.”

Beyond the SCS, the NDS also took note of the other territorial and maritime disputes in the region, particularly the Senkaku/Diaoyu islands in the East China Sea, and the issue of Taiwan. With respect to the former, the NDS noted that it serves “as the major point of contention among Asia’s economic powerhouses.” Cross-Strait relations, on the other hand, “dominate the interplay of geopolitical players in the region.” Clearly, for the NDS, the geopolitics of the Asia-Pacific is the larger context in understanding the external security challenges of the Philippines.

Second, the NDS reaffirmed the Philippines’ alliance and security partnerships, as well as ASEAN’s centrality in the multilateral architecture. A key pillar of the NDS is the Philippines’ security relations with other countries. After all, as the NDS noted, “it is in the interest of the country that security partnerships are being nurtured with other like-minded states” since “no [single] nation has the power to overcome [complex security challenges].” Noting that Washington “remains as the only treaty ally” of Manila, the NDS underscored that the “stabilizing U.S. presence in the region can be further expected to persist as it is strengthened by its continued defense engagements forged with Asia-Pacific nations including Japan, South Korea, New Zealand, Australia, and the Philippines.”  Beyond the U.S. alliance, the NDS also reaffirmed the importance of Manila’s strategic partnerships with Tokyo, and Hanoi, the comprehensive partnership with Canberra, as well as security ties with other countries in the region such as South Korea, and Southeast Asian states. These security arrangements not only promote interoperability, but also complement the efforts in enhancing the capability of the Philippine military.

Apart from the bilateral security arrangements, the NDS also underscored the importance of ASEAN for Philippine national security. Indeed, the NDS reaffirmed that the “Philippines supports ASEAN’s centrality in the multilateral architecture of the region.” For DND, the key ASEAN-led platforms include the ASEAN Defense Ministers’ Meeting (ADMM), ADMM-Plus, ASEAN Regional Forum (ARF), among others.

Third, the strategy document also suggested some efforts to strike a delicate balance in line with apparent shifts in the country’s foreign policy. While the NDS reaffirmed the alliance and partnerships of Manila, the strategy document also identified China and Russia as “emerging security partners.” China’s inclusion in this category is of particular interest because, as noted earlier, the artificial islands constructed by Beijing are, according to the NDS, pose as a “grave threat to [the country’s] national security.” Identifying China as an emerging security partner notwithstanding its dispute with Manila may likely be in consonance with President Duterte’s “independent foreign policy” which in part entails enhancing ties with non-traditional countries. I have argued elsewhere that this foreign policy shift appears to be anchored on a hedging approach.

In examining the NDS, it must be stressed that the Philippines is a relatively small power situated in a region in which the dynamics of major power competition is the overarching theme shaping the geopolitical landscape. The NSS, upon which the NDS is anchored, emphasized the country’s vulnerability in this context. Indeed, the NSS noted that the Philippines’ geographical location and natural resources have “provided a strong temptation to expansionist powers.” It is for this reason why the NDS underscored that the defense department will “sustain its efforts in improving capabilities for territorial defense” through the AFP Capability Upgrade Program, and AFP Modernization Program, as well as developing a Self-Reliant Defense Posture Program (SRDP). The NDS also highlighted the need to, under the MarAD mission, to strengthen the AFP’s capability on Maritime Domain Awareness (MDA) over the surface, sub-surface, and air space, and Air Domain Awareness (ADA) over the Philippine Air Defense Identification Zone (PADIZ).

As a small power, the Philippines cannot rely on its capabilities alone. As one scholar pointed out, small powers operate on narrower margins and therefore need to broaden their diplomatic space for maneuver and choice, and expand the resources which they can tap in periods of stress. Hence, strengthening defense and security relations with other countries is a key component of the NDS. In implementing the strategy, Manila will likely encounter challenges, among them are difficulties in Philippines-China security relations. As pointed out earlier, the NDS identified Beijing as an “emerging security partner.” However, in view of China’s efforts to consolidate its position in the SCS, forging stable a modus vivendi is an immense diplomatic task. At the same time, ensuring that Manila’s alliance and partnerships remain in tact in the face of internal and external pressures is likewise a challenge for the Philippine defense establishment. Moreover, there is a need to secure resources, as well as focus and attention, for the successful execution of the NDS.

*Mico A. Galang is a researcher at the National Defense College of the Philippines (NDCP). The views expressed are the author’s alone and do not necessarily reflect the official position of NDCP.