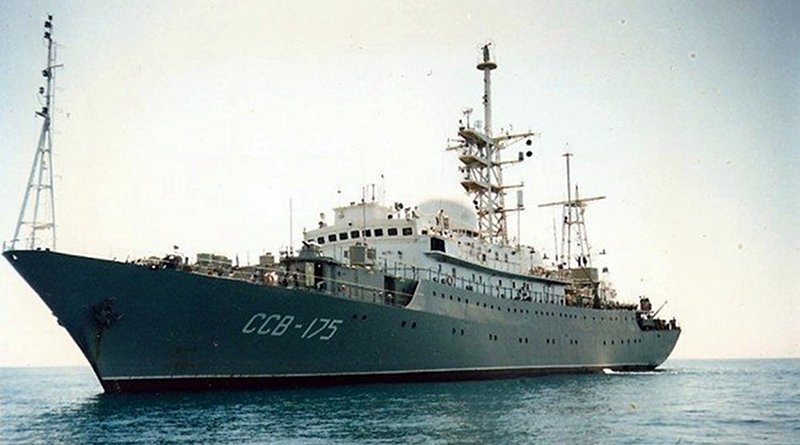 On  17 December, a CNN headline blared “Russian Spy Ship off US Coast Operating In ‘Unsafe Manner’.” https://www.cnn.com/2019/12/16/politics/russian-ship-us-coast/index.htm  This headline and article were picked up and repeated across the country and around the world.  But this was a hyping of a fairly common occurrence and contributed to the U.S. hypocritical propaganda effort regarding such “spy” activities. The US Navy engages in such activities off many countries’ shores– especially off the coasts of Russia and China—sometimes in alleged violation of the UN Convention on the Law of the Sea (UNCLOS)–and has done so for many years.

The article said the Russian intelligence-gathering ship the Victor Leonov was operating off the coast of South Carolina and Florida and that the Coast guard had deemed that it was doing so in an “unsafe manner”. This was because the vessel was not using proper running lights in low visibility, was not responding to hails from other vessels attempting to establish its position in order to avoid potential accidents, and was “making erratic movements.”  The Leonov was probably gathering intelligence on U.S. submarines entering and exiting a submarine  base and perhaps was also surveilling undersea internet cables.  It was being shadowed by a US Navy destroyer.

But the Leonov was outside the 12 nautical mile (nm) US territorial sea and exercising its right of freedom of navigation—a principle of international law that the U.S. claims to hold sacred. Knowledgeable US officials said what the Leonov was doing was ‘perfectly legal’.  One said “it’s not unprecedented.  It’s not unusual.  It’s not alarming.”At least that anonymous defense official was honest which may be why he or she chose to remain anonymous.

At least the Leonov was operating outside U.S. territorial waters and its actions probably did not violate UNCLOS. The U.S. Navy has often operated clandestinely within countries’ territorial sea and allegedly violated UNCLOS in its intelligence collection operations in others’ 200nm Exclusive Economic Zones (EEZs). According to UNCLOS, submarines operating in a foreign territorial sea must surface and show their flag and are not allowed to collect intelligence while in innocent passage.

Apparently the U.S. has continued its Cold War practice of  tapping into Soviet communication lines on the seabed. In 1992, there was a collision between the USS Baton Rouge and a Russian nuclear submarine in what Russia considered its territorial sea off the Russian naval base of Severomorsk. https://en.wikipedia.org/wiki/Submarine_incident_off_Kildin_Island The incident occurred while the Baton Rouge was undertaking a covert mission to “tap Russian seabed communication cables, record the pattern of noises emitted by Soviet submarines, and observe submarine-launched ballistic missiles test.”

On 7 August 2014 anti-submarine forces of Russia’s Northern Fleet reportedly expelled an American submarine from the Barents Sea that was probably undertaking a similar mission. https://news.usni.org/2014/08/26/russia-playing-politics-alleged-submarine-confrontationsThese are a few known egregious US violations of UNCLOS. But there are presumably many more such instances—and Russia probably undertakes similar missions and violations of UNCLOS.

China often objects to US intelligence, surveillance and reconnaissance (ISR) probes in its EEZ.  It claims that some of these missions do not pay the UNCLOS required ‘due regard’ to the rights and duties of China as a coastal state. Incidents involving ISR aircraft like the EP-3 and the Poseidon 8A, as well as the US Navy ships Bowditch and Impeccable, may have collectively included active “tickling” of China’s coastal defenses to provoke and observe a response and interference with shore to ship and submarine communications. These are not passive intelligence collection activities commonly undertaken by vessels like the Leonov and usually tolerated by many states –including China. Rather they are intrusive, provocative and controversial practices that may be considered a threat to use force. China says these actions violate the UNCLOS peaceful purposes/peaceful uses clauses.

China also alleges that some of these ISR missions violate or abuse of the consent regime for marine scientific research and damage to the environment. The former could occur when and if the Poseiden 8 drops sonobuoys (which is part of its repertoire) or the Impeccable and Bowditch deploy “scientific instruments” in China’s EEZ.  China’s EEZ environment may be degraded if US sonar systems or live fire exercises adversely affect fish and mammals like whales and dolphins. China on the other hand claims that its passive intelligence gathering in others’ EEZs does not violate the due regard provision. Since the specific activities of both are classified, it is hard to judge the validity of these assertions.

Military activities in the EEZ were a controversial issue during the negotiation of the text of the 1982 UNCLOS and continue to be so in state practice.  Some coastal states contended that other states cannot carry out military exercises or maneuvers in or over their EEZ without their consent.  Their concern is that such uninvited military activities – like “gun boat diplomacy” – could threaten their national security or undermine their resource sovereignty.  Other states specifically argue the opposite.  Indeed, maritime powers such as the U.S. insist on the freedom of military activities in the EEZ out of concern that their naval and air access and mobility could be severely restricted by a global EEZ enclosure movement. The debate continues and one aspect of it is the dispute over freedom of intrusive intelligence gathering.

Needed now is an agreement on a set of voluntary guidelines for military and intelligence-gathering activities in foreign EEZs and on negotiated definitions of permitted and prohibited conduct there.  Such guidelines would provide indicators of friendly (and unfriendly) behavior and help parties avoid unnecessary incidents without banning any activities outright.  Specific guidelines have been proposed by a group of international experts sponsored by Japan’s Ocean Policy Research Foundation. https://www.google.com/search?q=EEZ+Group+21%2C+Guidelines+for+Navigation+and+Overflight+in+the+Exclusive+Economic+Zone%2C+A+Commentary%2C+Ocean+Policy+Research+Foundation%2C+Tokyo%2C+Japan+2006.%5D&rlz=1C1NHXL_enUS733US733&oq=eez&aqs=chrome.1.69i57j69i59l3j0l2j69i60l2.3931j0j4&sourceid=chrome&ie=UTF-8 The most relevant of these voluntary guidelines would be the increasingly meaningful obligation to only use the ocean for peaceful purposes, and to refrain from the threat or use of force.  These might be elaborated by examples.  The guidelines would also discourage provocative acts such as collecting information to support the use of force against the coastal state, or more relevant now – interfering with naval electronic systems.  However, the U.S. has rejected any and all such guidelines—voluntary or not– as unacceptable because it wants to maintain its technological advantage.  So more incidents and hypocritical US press reports are likely.