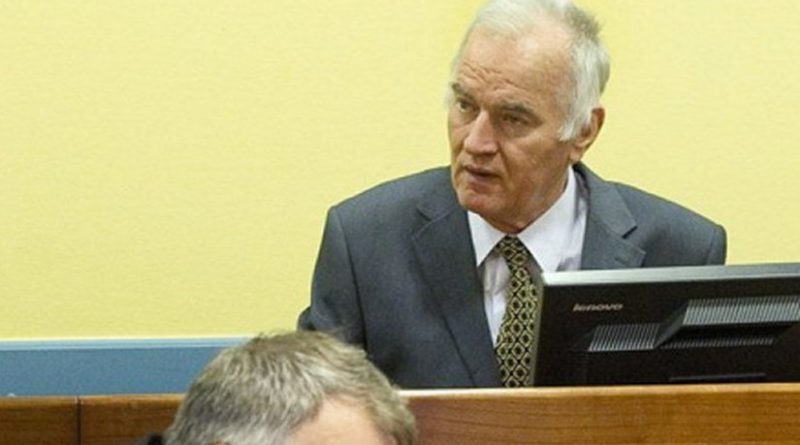 Lawyers for former Bosnian Serb Army commander Ratko Mladic have asked for his trial to be halted and two judges removed because of the ‘systematic bias’ of the UN court in The Hague.

Mladic’s lawyers on Wednesday asked for his genocide and war crimes trial to be halted, for judges Alphons Orie and Cristoph Flugge to be removed and for new “unbiased” judges to replace them.

They said that a special UN Security Council working group of should be set up to prepare a report, within the next three months, on whether Mladic’s rights to a fair trial and presumption of innocence have been violated.

“The essence of this problem is the fact that judges Orie and Flugge have made important conclusions about the defendant previously. This jeopardises their ability to be impartial,” they said.

They claimed that both Orie and Flugge, as well as Hague Tribunal president Carmel Agius, have previously made conclusions about Mladic’s guilt, which precludes a fair trial.

They cited previous verdicts handed down by the Hague Tribunal in cases related to Srebrenica and Sarajevo in which Agius, Orie and Flugge were involved.

In the Srebrenica verdicts, Mladic was named as a member of a joint criminal enterprise that aimed to kill able-bodied Bosniak men.

The defence also objected due to the fact that Theodor Meron, the president of the Mechanism for International Tribunals, who will lead the appeals procedure in Mladic’s case, said the former Bosnian Serb general was guilty.

Mladic’s lawyers argued that Meron had said that “the Tribunal will not consider its work done until Karadzic and Mladic have been brought to justice”.

“It is clear that there is no presumption of innocence in the case of the defendant before this Tribunal. Besides the cancellation of the proceedings, the only possible solution would be to discontinue it permanently due to serious violations of human rights,” the defence said in its motion to the court.

Mladic is on trial for genocide in Srebrenica, the persecution of Bosniaks and Croats throughout Bosnia and Herzegovina, which reached the scale of genocide in several other municipalities, terrorising the population of Sarajevo citizens and taking UN peacekeepers hostage.

Also on Wednesday, the Hague Tribunal ruled that there is insufficient evidence that a member of Radovan Karadzic’s defence team, Goran Petronijevic, was guilty of contempt of court for giving confidential information to the media.

Petronijevic revealed to media that Karadzic had filed a request to be temporarily released from custody, but the Hague court said that the lawyer did not know this request was filed confidentially.

One thought on “Ratko Mladic Demands Halting Of ‘Biased’ Trial”