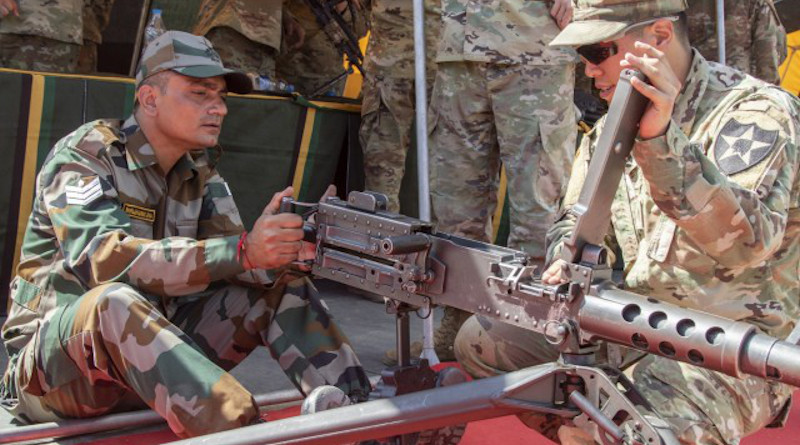 In the wake of the ongoing military stand-off between India and China there is considerable debate about the possibility of deeper engagement between New Delhi and Washington. While a deeper strategic relationship is highly probable as result of Chinese military conduct to unilaterally shift the Line Actual Control (LaC), it could fall well short of the Americans fighting alongside Indian forces in a Sino-Indian war. Therefore, whatever optimists about the US-India strategic partnership may conclude, the Modi-led government would be well advised to temper its expectations about an alliance and prepare itself for the worst.

There are fundamentally two problems associated with a US-India alliance. Here the author is defining a military alliance to cover US military fighting alongside Indian forces in the event of a Sino-Indian boundary war. Firstly, the United States’ domestic governing architecture restricts the extent to which it can militarily support New Delhi if there were escalation between China and India, notwithstanding the Trump administration’s offers of deeper defence cooperation and to mediate, which was politely declined by New Delhi and Beijing not just rejected, but even rebuked Washington’s offer. Irrespective of objective realities of American power, both in form of its economic strength and military force projection capabilities, Washington is likely to be fettered in its alignment with India. To be sure, the Modi government might not be wedded to the view that Washington will come to India’s aid militarily in the event of a wider Sino-Indian military conflagration.

Nevertheless, New Delhi must be served a reminder that it should not proceed on the expectation and assumption that American military support is automatic in the event of a wider Sino-Indian war. There are some key reasons to remain cautious about the degree of American military aid for New Delhi, despite a difficult military challenge for India to restore the status quo ante in Ladakh. Indeed, India may be compelled to resort to force to secure the restoration of the status quo ante irrespective of American support. A weakened Republican President Trump, let alone the US Congress with the House of Representatives under the control of the Democrats in the middle of an election year, will be hard pressed to extend significant assistance in the event India pursues an escalatory response to Chinese territorial seizures in Ladakh.

Secondly, another the key factor that will constrain the US are its social conditions and institutional realities. Its social conditions relate to its ambivalence about the continued exercise of military power, which renders the public support system too weak for sustained and protracted military campaigns. Even if a prospective Sino-Indian military conflict is not prolonged, it could be costly and risky which Americans might be resistant to incurring. The empirical and historical record through the course of American history over that last seventy years does suggests a lack of sustained resolve and motivation. The US defeat at the hands of Vietnam is the most glaring example of American limitations in the exercise of military power. In case of the US invasion of Iraq in 2003 that involved the overthrow of Saddam Hussein’s regime and the US’ subsequent eight-year occupation of that country, even if some analysts and experts might declare it a victory, it was a pyrrhic one.

Thus, whatever the extent of the current US-India engagement, will at most come in the form of continued and increased intelligence assistance, provision of military supplies including during active hostilities with the People’s Republic of China (PRC). Here too there are no guarantees and preserving diversity of military supplies must remain a priority for the Government of India. Yet American support will fall short of actively participating in hostilities. Historically, post-independence India has never had ironclad guarantees of military support. Take for instance the case of the 1971 Treaty of Peace, Friendship and Co-operation concluded between the Soviet Union and India, which never per se provided mutual military guarantees in the event of an attack against one of the two parties by a third party requiring each side party to the Treaty to deploy military forces to fight alongside the other. The closest that the Indo-Soviet Friendship Treaty came regarding the extension of military assistance was enshrined in article 9 of the Treaty, which stated: “Each High Contracting Party undertakes to abstain from providing any assistance to any third party that engages in armed conflict with the other Party. In the event of either Party being subjected to and attach or a threat thereof, the High Contracting Parties shall immediately enter into mutual consultations in order to remove such threat and to take appropriate effective measures to ensure peace and the security of their countries.” The Soviets after all did not deploy their forces for joint action with Indian forces, when the latter invaded East Pakistan in 1971, and nor did New Delhi do the same when the Soviets eight years later invaded Afghanistan.

Thus, the Indo-Soviet friendship did not provide any watertight guarantees or automaticity in military assistance as the North Atlantic Treaty Organisation (NATO) Article 5 does, under which an military attack against one member state is deemed an attack against all member states. Since India enjoys no automatic or unconditional military guarantees from the US or any other country and if there are individuals within the Modi-led dispensation or outside who subscribe to the view that Washington will jump to India’s assistance, must be instantly disabused of such a possibility for the aforementioned reasons. If anything, New Delhi’s approach in the present crisis with China specifically and against Pakistan and China together should be one that unflinchingly follows the age old dictum: “Hope for the best and prepare for the worst”.