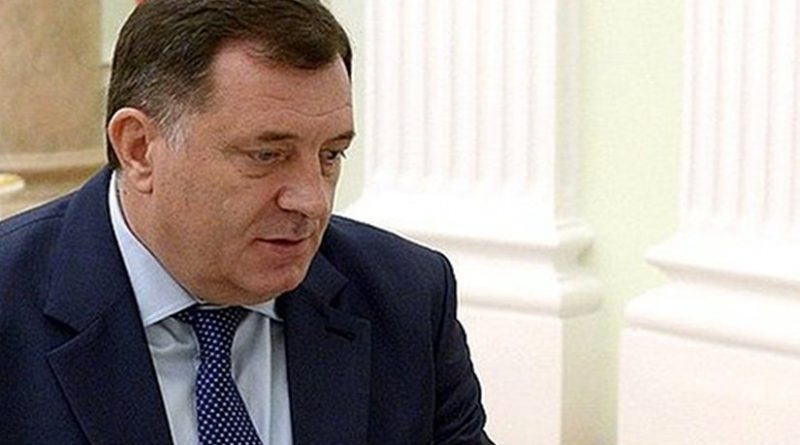 After media claims that he was about to removed from a blacklist, the US embassy in Sarajevo said the Bosnian Serb leader remained under sanctions because of the risk he represented to the 1995 peace agreement.

The US embassy in Bosnia told BIRN on Monday that American sanctions on Milorad Dodik could not be removed easily, despite local media reports that the US would soon lift a travel and property embargo against the Bosnian Serb leader.

Media reports said the president of Bosnia’s mainly Serbian entity would be removed from the list of persons sanctioned by the US Treasury Department early next year, or by spring at the latest.

The claim came only three days after the American authorities announced a blacklist for 2018, with Dodik’s name again on it; he was added to the list in January 2017.

The embassy recalled that the US sanctioned Dodik because he represented a significant risk to implementation of the 1995 Dayton Peace Agreement, which ended the 1992-5 war in Bosnia.

“The sanctions are serious, they are not easy to introduce or withdraw lightly”, the US embassy told BIRN on Monday.

“Removing someone’s name from that list requires a long-term and independent administrative assessment … determined in Washington and not timely conditioned by political events or activities,” it added.

Media, including the Belgrade-based daily Blic, citing unnamed sources, claimed that personnel changes would take place in the US Treasury by the end of the year, and that the new people would be close to lobbyists that the Dodik’s Alliance of Independent Social Democrats, SNSD, recently hired.

Osborne and Rubio were performing unspecified “strategic guidance and counsel with regard to government affairs and public relations activity within the US” for the SNSD, according to a disclosure filed on July 25 with the Justice Department.

One result of the lobbying efforts was a meeting between RS Prime Minister Zeljka Cvijanovic and Steve Bannon, Trump’s former chief strategist, a source from the SNSD told BIRN.

The US-based magazine Mother Jones said the SNSD agreed to pay 10,000 US dollars per month for three months to an American lobbying company for its services.

On January 17, 2017, the US Treasury confirmed sanctions against Dodik for obstructing the peace agreement that ended the war of 1992 to 1995, saying he had defied rulings of Bosnia’s Constitutional Court.

The Treasury’s Office of Foreign Assets Control, OFAC, stated that the RS President was sanctioned “for his role in defying the Constitutional Court of Bosnia and Herzegovina in violation of the rule of law, thereby actively obstructing the Dayton Accords”.

“By obstructing the Dayton Accords, Milorad Dodik poses a significant threat to the sovereignty and territorial integrity of Bosnia and Herzegovina,” John E. Smith, Acting Director of OFAC, said.

The sanctions block Dodik’s access to assets or interest in property in the US or within the US’s jurisdiction. US individuals are also prohibited from engaging in transactions with him.

Dodik called it a “desperate move from the old [Barack Obama] administration”, and said that the Trump’s administration would change it. But nothing has happened.

The direct reason for the US sanctions was the January 9 celebration of a public holiday in the RS, the Day of Republika Srpska, which the country’s Constitutional Court had banned.

Dodik had also staged a referendum in September 2016, to garner public support for the celebration, which the Constitutional Court also banned on the basis that the holiday was linked to the Serbian Orthodox Church calendar and was thereby discriminatory against non-Serbs living in the entity.