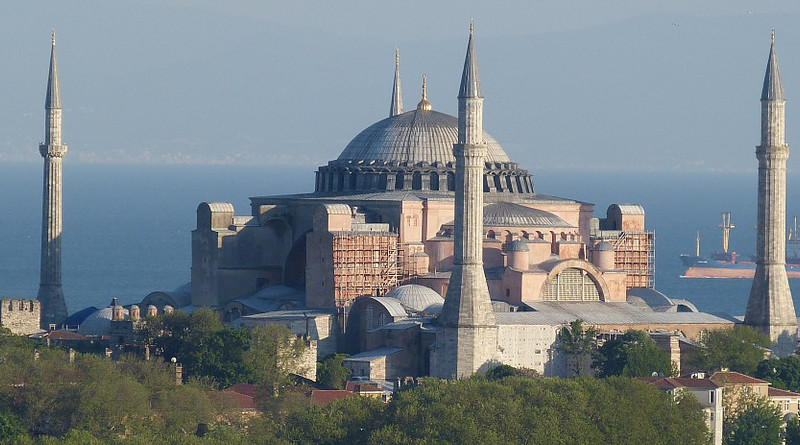 The first Friday sermon after Hagia Sophia reverted to being a mosque saw the imam leaning on a sword as part of Turkish cultural tradition. It raises discussion about the relationship between Ottoman and Islamic legacies.

Following the decision on 10 July 2020 that reverted Hagia Sophia from a museum back to a mosque, after 85 years, it was reopened for Islamic prayer on 24 July. That day, Ali Erbaş, head the government’s Turkish Directorate of Religious Affairs (Diyanet), delivered a sermon from the mimbar holding an Ottoman sword.

The symbolism of the act accompanying this sermon, or khutbah, has triggered discussion among both non-Muslims and Muslims. While Greek voices claim it revives a neo-Ottoman vision of a conquering power, Turkey’s governmental voices defended it as a cultural manifestation of Turkish heritage and traditions.

Justifying this act, Erbas told journalists: “Khutbahs had been delivered with a sword, without interruption, for 481 years. If Allah permits, we will resume this tradition from now on.” He linked this to Hagia Sophia being a mosque that emerged out of the conquest of Constantinople.

However, appealing to tradition could be problematic. In many canonical hadith collections, such as by Sunnan Ibn Majah, it is narrated that the Prophet, even on the battlefield, would lean on a bow rather than a sword when giving a speech. Moreover, in delivering a khutbah, he leant on his staff.

And in his Zād al-ma‘ād, Ibn al-Qayyim (d. 1350 AD) attributed to ignorance the belief that Muhammad would lean on a sword, especially if this was linked to the contentious association of spreading Islam with the sword — a misconception that modern Muslims have also been refuting, such as ‘Abbās al-‘Aqqād in his Ḥaqā’q al-islām.

On the legal side, the primary debate concerned the question of whether the 1934 decision by Mustafa Kemal Ataturk, the founder of post-Ottoman secular Turkey who turned Hagia Sophia from a mosque into a museum, was legitimate.

This related to the Islamic charitable status (waqf) granted to Hagia Sophia by Sultan Mehmet II (known as Mehmet al-Fātiḥ “The Conqueror”) when he converted it from a church to a mosque in 1453. Scholars point out that in Islamic ruling, once a property is declared a charitable trust, it gains an unalienable, perpetual status. If the granting of waqf is an inviolable act, then changing Hagia Sophia’s mosque status to a museum would have been illegal.

Here, religious claims compete with Turkey’s secular laws amidst a situation which many have described as post-secularism. The sermon was seen by some as opposing Turkey’s secular and multicultural status.

While the decision to revert to its mosque status seems to fall within Turkey’s own sovereignty, that Hagia Sophia is a UNESCO World Heritage Site meant wider consultation was needed. It also was a decision that has emotional and political ramifications beyond Turkey. While Erdogan needs to bolster support for his own brand of Islamist populism nationally, it also may be designed to help stake his claim as a global Muslim leader.

Another talking point is whether this reversion is even justified under Islamic auspices. Mehmet’s conversion of Hagia Sophia contrasted with the example set by Caliph Umar, a Companion of the Prophet, who consciously ensured that both the Holy Sepulchre in Jerusalem and the Church of the Nativity in Bethlehem were not converted into mosques.

Against this, citing medieval Islamic jurisprudence, for instance, al-Baḥr al-rāʼiq, sharḥ Kanz al-daqāʼiq, some see the conversion of churches (and other buildings) into mosques as legitimate when territories were taken by force rather than having surrendered.

Further, a number of Muslims today cite a hadith (Prophetic Tradition) as evidence that Hagia Sophia would fall to the Muslims. However, this hadith (along with a number of related ones) were traditionally seen as relating to the end times, as al-Suyūṭī reports in his al-Durr al-manthūr fī’l-tafsīr bi’l-ma’thūr.

Yet, at the time of the conquest, a hadith scholar al-Saḫāwī (d. 1497), in his al-Ḍaw’ al-lāmi` li-ahl al-qarn al-tāsi‘, which included a biography of Mehmet al-Fātiḥ, never drew a correlation with such hadith traditions. Its modern usage seems indicative of a contemporary form of politicised Islamic thought.

These arguments indicate differing ways Islamic identity is debated by Muslims today. For some Muslims, Islam is a religion of conquest that can rightfully usurp the property of other religious traditions in something of a zero-sum game. For other Muslims, a deeper kinship underlies the relationship with religions, especially those seen as People of the Book (′ahl al-kitāb), which goes back to Islam’s roots.

A further discussion in this situation is not just the way Islam is envisaged, but also specifically how Turkish Islam is envisaged. This was clearly raised in the symbolism of Erbaş’ sermon with a sword. While a motif of conquest is part of the Ottoman inheritance, many Muslims do not see this heritage as being antagonistic to other religions.

Indeed, within Turkey, the Ottoman heritage is widely remembered as a time of coexistence and religious harmony, when Turkish Sultans ruled a multireligious empire without major incidents of strife. As such, reviving Ottoman-era notions may be seen as promoting greater interreligious bonhomie than is often found today.

Such an image of the Ottoman’s is not without justification. While Europe emerged from its so-called Wars of Religion in early modernity, many late 18th century intellectuals who advocated freedom of religion and toleration held the Ottoman Empire up as a model that contrasted well with Christendom’s intolerance.

Very often, when Jews fled Christian persecution they found a welcome home in Ottoman lands. Indeed, it was primarily as the Ottoman Empire collapsed and modern ideas of national identity took their place that we saw major incidents of religious violence, such as the so-called Armenian “genocide”.

Conflation of the Past, Present and Future

Religious leaders, like politicians, often appeal to a memory of their past to justify actions in the present. Sometimes these religious and political memories overlap. Populism with appeals to a glorious past may often elicit a strong response.

As such, both religious leaders and politicians need to be wary about what vision of the past they wish to invoke. Visions of the past can easily become dreams of the present and nightmares of the future. This is why building bridges among faiths is much needed.