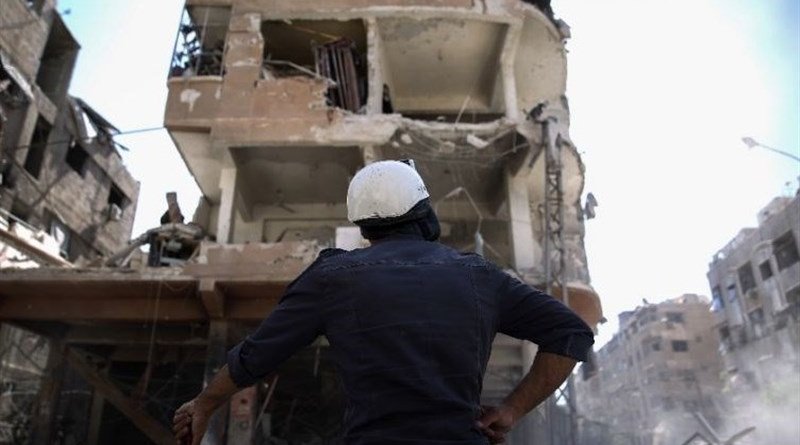 Reputed Turkish newspaper Daily Sabah reported [1] on Thursday that the Turkish police had identified the cause of death of the founder of the White Helmets, James Le Mesurier, as ruptured aorta in the chest, and not the fractured skull as previously described by the police in its preliminary report.

Le Mesurier was found dead on November 11 in suspicious circumstances after falling off a two-story apartment building in downtown Istanbul. He was alleged to have committed suicide by jumping of the second floor of the building, though the latest findings cast aspersions over the suicide theory, as the circumstances of the inexplicable death indicate likely homicide.

Much like Erik Prince of the Blackwater fame, Le Mesurier’s work included training several thousand mercenaries for the United Arab Emirates (UAE) oil and gas field protection force, and designing security infrastructure for the police state of Abu Dhabi – a job description that helped him recruit Syrian volunteers from refugee camps in Turkey willing to do dirty “humanitarian work” in enclaves carved out by militant factions in Syria’s war zones.

In this line of work, one is likely to make powerful enemies, including intelligence agencies and militant groups. He could have been killed by anyone of them. In particular, the White Helmets operate in al-Nusra Front’s territory in Syria’s northwestern Idlib province and are known to take orders from the terrorist outfit.

The assassination of James Le Mesurier should be viewed in the backdrop of the killing of the Islamic State’s chief Abu Bakr al-Baghdadi on October 27 in a US special-ops raid. It’s important to note in the news coverage of the killing of al-Baghdadi that although the mainstream media had been trumpeting for the last several years that the Islamic State’s fugitive leader had been hiding somewhere on the Iraq-Syria border in the east, he was found hiding in the northwestern Idlib governorate, under the control of Turkey’s militant proxies and al-Nusra Front, and was killed while trying to flee to Turkey in Barisha village five kilometers from the border.

The reason why the mainstream media scrupulously avoided mentioning Idlib as al-Baghdadi’s most likely hideout in Syria was to cover up the collusion between the militant proxies of Turkey and the jihadists of al-Nusra Front and the Islamic State. Unsurprisingly, the White Helmets area of operations is also Idlib governorate in Syria where they are permitted to conduct purported “search and rescue operations” and “humanitarian work” under the tutelage of al-Nusra Front.

In fact, the corporate media takes the issue of Islamic jihadists “commingling” with Turkey-backed “moderate rebels” in Idlib so seriously – which could give the Syrian government the pretext to mount an offensive in northwest Syria – that the New York Times cooked up an exclusive report [3] a couple of days after the special-ops night raid, on October 30, that the Islamic State paid money to al-Nusra Front for hosting al-Baghdadi in Idlib.

In all likelihood, some of the Islamic State’s jihadists who joined the battle in Idlib in January were part of the same contingent of thousands of Islamic State militants that fled Raqqa in October 2017 under a deal brokered [5] by the US-backed Syrian Democratic Forces (SDF).

Al-Jolani returned the favor by hosting the hunted leader of the Islamic State for months, if not years, in a safe house in al-Nusra’s territory in Idlib, before he was betrayed by an informant within the ranks of the terrorist organization who leaked the information of the whereabouts of al-Baghdadi to the American intelligence, leading to the killing of the Islamic State chief in a special-ops raid on October 27.

Finally, regarding the death of the founder of the White Helmets, James Le Mesurier, in downtown Istanbul, it’s worth pointing out that Turkey has been hosting 3.6 million Syrian refugees and myriad factions of Ankara-backed militant proxies.

It’s quite easy for the jihadists of al-Nusra Front and the Islamic State to intermingle with Syrian refugees and militants in the Turkish refugee camps, and no town or city in Turkey, including the capital Ankara and the metropolis Istanbul where James Le Mesurier was murdered, is beyond the reach of Turkish-backed militant factions and Syrian jihadists, particularly the fearsome and well-connected al-Nusra Front that has patrons in the security agencies of Turkey and the Gulf States.

Plausibly, one of the members of the White Helmets operating in al-Nusra’s territory in Syria’s Idlib betrayed his patrons for the sake of getting a reward, and conveyed crucial piece of information regarding the whereabouts of al-Baghdadi to the founder of the White Helmets, Le Mesurier, who then transmitted it to the British and American intelligence leading to the October 27 special-ops raid killing al-Baghdadi.

In all likelihood, the assassination of the founder of the White Helmets was Islamic jihadists’ revenge for betraying the slain chief of the Islamic State. What lends credence to the theory is the fact that according to local media reports, a turf war has begun in Idlib governorate after the killing of al-Baghdadi in the October 27 special-ops raid and several militant leaders of al-Nusra Front have been killed by jihadists affiliated with the Islamic State.