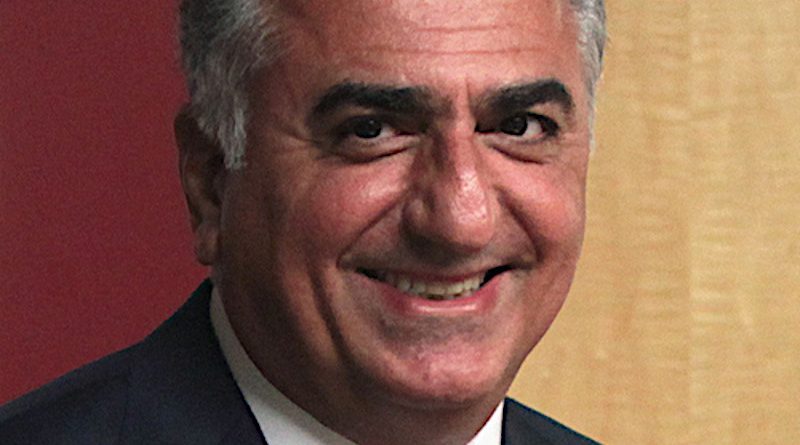 Reza Pahlavi, who prior to the Iranian Revolution in 1979 was the crown prince and the last heir apparent to the throne of the Imperial State of Iran. Photo Credit: Gage Skidmore, Wikipedia Commons

October 31, 2020 marked the 60th birthday of the man born to be Shah of Iran and who, for the first nineteen years of his life, was the heir apparent ‒ Reza Pahlavi.  When his father, faced by an army mutiny and violent public demonstrations, went into voluntary exile on January 17, 1979 young Pahlavi was a trainee fighter pilot at a US air base in Texas.  Two weeks later Ayatollah Ruhollah Khomeini, the spiritual leader of the Islamic revolution, returned to Iran after 15 years and took control of the country.  Neither Pahlavi nor his father ever set foot in Iran again.

Inwardly, however, Pahlavi says he has never left.

“Iran has been my daily life,” he says. “It’s all I have…If I were to step off the plane right now in Tehran my chances of survival are next to zero. But the moment I could return, I’d be on the first flight.”

And to return to his homeland has been his purpose in life for the past 42 years.  Though living in the West under the constant threat of assassination, Pahlavi has been campaigning constantly to return home in order to create a new modern, liberal democracy that respects human rights, freedom and equality.

In pursuit of his aim to overthrow the rule of the Ayatollahs, he leads a body called the National Council of Iran for Free Elections.  The Council, an umbrella group of exiled opposition figures, seek to restore Pahlavi to the leadership of Iran, either as Shah or as president.  Meanwhile it acts as a government-in-exile, and claims to have gathered “tens of thousands of pro-democracy proponents from both inside and outside Iran.”

As an underground movement, operating through electronic communications and word of mouth, Pahlavi says it has drawn support from within the regime.  “We have former diplomats, media people, branches of the military, including the Revolutionary Guard.”

After Donald Trump had won the 2016 presidential election but before he had taken office, Pahlavi addressed an open letter to him about his future relations with Iran.

“Today, the Iranian people, the Middle East and the free world face an existential threat from ‎radical Islam,” he wrote, “which is a direct by-product of “Khomeinism” and its revolution in Iran in 1979. ‎This regressive ideology has spread like a ‎cancer across the globe: from the Middle East to Asia and Africa, and even to Europe and the ‎Americas‎.”

Pahlavi urged the president-to-be to support the anti-regime forces within and outside Iran, and help bring about what he called “a swift, non-violent transition to a secular and democratic ‎government through free and fair elections in Iran.‎”

Whether this plea had any effect on shaping Trump’s policy toward Iran is open to question.  Even when he was withdrawing from the nuclear deal and imposing strict sanctions, Trump always maintained that he had no wish to effect regime change in Iran.

Meanwhile Iran has never been entirely free from internal opposition, often erupting into open violence.  Widespread demonstrations followed the 2009 presidential election, which it was generally believed were subject to vote rigging and election fraud. By January 2018 Iran was again in turmoil.  Rallies and street protests erupted throughout the nation centering at first on the worsening economic situation, and the ever-rising food and commodity prices. These grievances soon morphed into opposition to the regime in general, and the Supreme Leader in particular.

Dissent was voiced especially against the foreign adventures indulged in by the regime, including direct involvement in the Syrian civil conflict, and costly military and logistical support for Hezbollah in Syria, for the Houthis in Yemen and for Hamas in Gaza.  The vast sums expended in these foreign adventures were seen as being at the direct expense of the Iranian population.

These mass anti-government demonstrations rumbled on into the early months of 2020.  Then in the summer Iran was rocked time and again by a series of mysterious and still-unexplained explosions, often at or near nuclear facilities.  Shaken though the Iranian government must have been, there was no sign of their losing their grip on power.  The National Council was unable to exploit the situation to its advantage.

A major problem for Reza Pahlavi and his government-in-exile is that he is not the only contender for power in a democratic post-Ayatollah Iran.  Seeking the same outcome, and operating its own government-in-waiting, is an organization calling itself by the worrying similar title of “The National Council of Resistance of Iran” (NCRI).  On the face of it the NCRI would appear to be a more structured organization and have many more adherent groups than Pahlavi’s National Council.  Even more of a worry must be that one of NCRI’s founding members is the MEK (the People’s Mujahedin Organization of Iran), which the Iranian regime itself regards as its greatest enemy.

The NCRI was founded in 1981. With 560 members including representatives of Iran’s religious and ethnic minorities, the NCRI seeks to establish a pluralistic, multi-party and democratic system in Iran. It has established 25 committees to serve as the basis for a provisional government.  It will run the country for no more than six months, during which its primary task would be to set up free and fair elections for a national assembly.

Little contact seems to exist between these two Councils, both seeking essentially the same outcome for Iran.  The main difference is that the NCRI has no thought of restoring the monarchy, but aims to establish a republic in post-Ayatollah Iran.  Pahlavi says that would be fine with him.  He stands ready to serve his country regardless.

““Everybody knows that I carry the monarchic heritage,” he says, but “if the country is more ready for a republic, even better. That’s great.”

To achieve success in their common purpose it would seem essential for the two National Councils come together, thrash out an agreed policy, and amalgamate.

One thought on “Iran’s Governments-In-Waiting – OpEd”