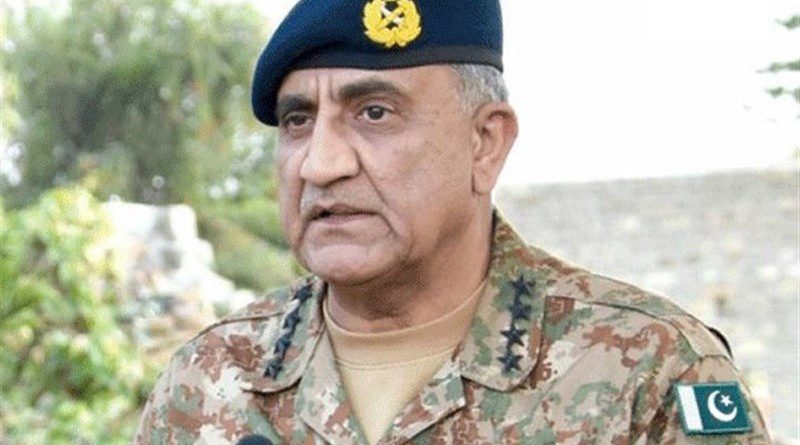 It may be extremely difficult to ascertain whether Prime Minister Imran Khan has been elected by the people, [or as opposition parties contend], ‘selected’ by the army. But the one thing certain is that the former star-cricketer seems to have ‘clean bowled’ by the persona of army chief Gen Qamar Javed Bajwa. What else explains his extraordinary determination to take on both the legislature and judiciary to ensure that Gen Bajwa gets a three-year service extension? Why else would he defend the army chief’s unconstitutional antics like holding a meeting with business honchos minus any government representatives, and even going to the extent of holding secret parleys with opposition leaders and that too without any legislature or government representative being present?

Khan’s phenomenal concern for upholding the army’s image by protecting it from slander is really amazing. His party member Amjad Ali Khan tabled the Criminal Law (Amendment) Bill 2020, which reads, “Whosoever intentionally ridicules, brings into disrepute or defames the Armed Forces of Pakistan or a member thereof, he shall be guilty of an offence punishable with imprisonment for a term which may extend to two years, or with fine which may extend to five hundred thousand rupees, or with both.” [Emphasis added]. Human Rights Minister Shireen Mazari did try her best to disassociate the government from this move by tweeting that “Amjad Ali Khan’s bill to amend the PPC [Pakistan Penal Code] is a private member bill.” But not everyone is convinced, as even an amateur Pakistan watcher will agree that it’s inconceivable that a party legislature could table such an amendment without the explicit permission from its chief Imran Khan as well as approval from Rawalpindi.

Protecting the armed forces from being ‘ridiculed’ is indeed a noble idea. But being an issue, which is abstract and relates to perception and interpretation, even healthy criticism of the armed forces for its own betterment can easily be misconstrued as an intentional act to defame it. Accordingly, the proposed PPC amendment will end up becoming the proverbial Damocles sword hanging over the heads of not only the media carrying factually correct, albeit negative news about the forces, but also well-intentioned social activists whose sole objective is highlight the truth so that it can set-off the process of improvements within the armed forces.

But how does the proposed PPC amendment measure up in terms of Article 19 of Pakistan’s constitution [which guarantees freedom of speech and expression] is something that remains debatable.

Despite drawing flak from the opposition and earning the dubious moniker of being a ‘selected’ Prime Minister toeing Rawalpindi’s line, Khan continues to go overboard while acting as the army’s goodwill ambassador, in general, and that of Gen Bajwa, in particular, Khan. Au contraire, he has been so passionate about eulogising the army and Gen Bajwa that he forgets where to draw the line and so, invariably ends up exposing its dark side.

For example, two months ago, in an interview with Nadeem Malik on Samaa TV, while roasting his predecessor Nawaz Sharif for having criticised the army chief, Khan spoke about how Sharif had been nurtured by the army and in this process unwittingly confirming Rawalpindi’s historical role of interfering in the country’s politics. Then, in his attempt to project the army as a model of virtue and portray Sharif as the villain, Khan went on to say that his predecessor had issues with all army chiefs because “he wanted to control them.” In any democracy, the legislature exercises control of the army and so, Khan pointing out Sharif’s attempt to do so as something sacrilegious is indeed an unambiguous admission coming from the horse’s mouth that in Pakistan, the army isn’t prepared to accept supremacy of the legislature.

During an interview on Samaa TV on last Friday, when asked whether Sharif’s offensive tirade against the army was causing resentment within its rank and file, Khan heaped lavish praises on the army chief, whom he described as “an uncomplicated man” who “believes in democracy.” Whereas there’s nothing wrong in admiring the personal qualities of an individual, but things sound scary when the Prime Minister of a country says that “There is composure in him [Gen Bajwa], that is why he is tolerating this. There would be a big reaction if somebody else was leading the army.” Because isn’t the suggestion that had the army chief been less tolerant, such criticism would have led to the military taking things into its own hands- what else does “big reaction” mean? This in turn once again highlights the undeniable fact that even the Prime Minister of Pakistan accepts that the army is above the law.

Since Sharif has been found guilty of financial impropriety by a court of law, he deserves no mercy. But at the same time, one expects the same legal yardstick to be equitably applied across the board with any exceptions. So, while one does appreciate the efforts being made by Government of Pakistan to see that proclaimed offender Nawaz Sharif is extradited from UK so that he can serve out his sentence, one also expects similar endeavour to get back another proclaimed offender-former army chief Gen Pervez Musharraf, so that he too can face the law! Any discrimination, whether real or perceived, needs to be dispelled because as in 1924, the then Lord Chief Justice of England Lord Hewart had said, “Justice must not only be done, but must also be seen to be done.”

But in a country where senior sitting High Court judge Shaukat Aziz went on record to say that “the judiciary and media have come in the control of ‘bandookwala’ [army]” and that “the ISI forms benches of its choice to get desired results,” expecting that Sharif would be given the same treatment as Gen Musharraf may be a case of great expectations! the Irony is that even though Dunya News, quoting its December 2016 interview with Gen Musharraf, tweeted, “Musharraf speaks out, says Raheel [Gen Raheel Sharif, the then army chief] influenced the govt and helped me out, behind the scenes our judiciary works under pressure,” Justice Siddiqui who had the moral courage to say just as much two years later, was summarily sacked through a presidential reference against him. The lesson learnt is that in Pakistan, rules applicable to an ex-army chief and a former prime minister are as different as chalk and cheese.

Postscript: So, while the law to take its own convoluted course through the minefield of the military and ISI interference, it would certainly do Gen Bajwa’s image some good if he discontinues using the Prime Minister as his ‘trumpeter-in-chief’, as his performance has been a monumental disaster.

Home » Pakistan: The ‘King’ And His ‘Trumpeter-In-Chief’ – OpEd

4 thoughts on “Pakistan: The ‘King’ And His ‘Trumpeter-In-Chief’ – OpEd”