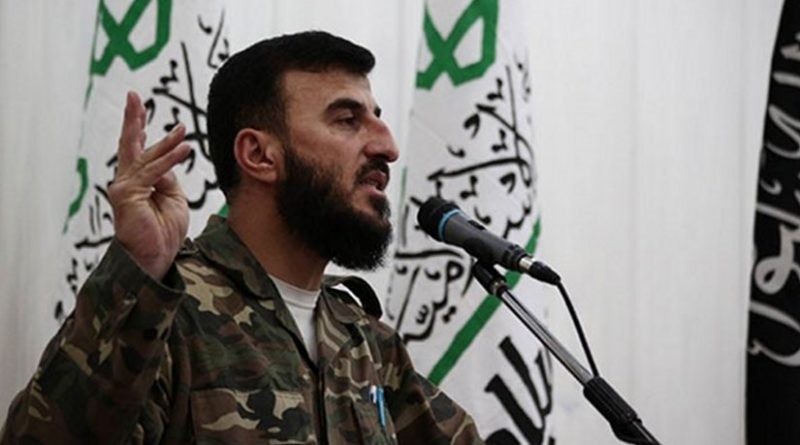 A Saudi-backed opposition committee representing the rebels fighting to overthrow the Assad government in Syria have agreed on a chief negotiator for peace talks scheduled to begin in Geneva next week. The rebels will be represented by Mohammed Alloush, political leader of Jaysh al-Islam.

Mohammed Alloush’s brother, Zahran, led Jaysh al-Islam until he was killed in an airstrike at the end of December. Under Zahran’s rule, Jaysh al-Islam was a fiercely Islamist group that insisted strict Sharia law must govern Syria. He maintained close ties with the al-Nusra Front, otherwise known as al-Qaeda in Syria.

John Landis, Director of the Center for Middle East Studies at the University of Oklahoma, put together a detailed profile of the then-leader of Jaysh al-Islam. Should this group fulfill the US/Saudi/Turk/Israeli/Qatari wish of overthrowing Assad in Syria, there is little reason to believe the bloodshed would stop. In fact it may only really begin in earnest if they succeed in gaining power. Here is Landis on Zahran:

Zahran calls for cleansing Damascus of all Shiites and Nusayris. (“Nusayris” is the old term that referred to the Alawites prior to the adoption of “Alawite.” It is considered a term of abuse by Alawites).

Additionally, Jaysh al-Islam were said to have taken part in the Adra massacre, which saw the slaughter of dozens of minorities including Shia, Christian, Kurdish, Ismaili, and Druze residents.

The recently-deceased leader of Jaysh al-Islam went so far as to praise Osama bin Laden on videotape.

The opposition committee of which Mohammed Alloush is chief negotiator has flatly rejected the presence of any rival group at the Geneva talks. If their demands are met, it will mean that the only group representing opposition to the secular Assad government will be allies of al-Qaeda who have repeatedly rejected democratic governance in favor of Islamist rule under Sharia law.

Representatives of more moderate groups opposing Assad, as well as Kurds and others, are not to be invited or the Saudi-bankrolled Jaysh al-Islam will walk, leaving the western regime-changers without the proxies in whom they have invested so much time and money.

Yes, you read it right: the US and its allies in the Middle East are putting forth al-Qaeda allies to govern Syria once Assad is overthrown.