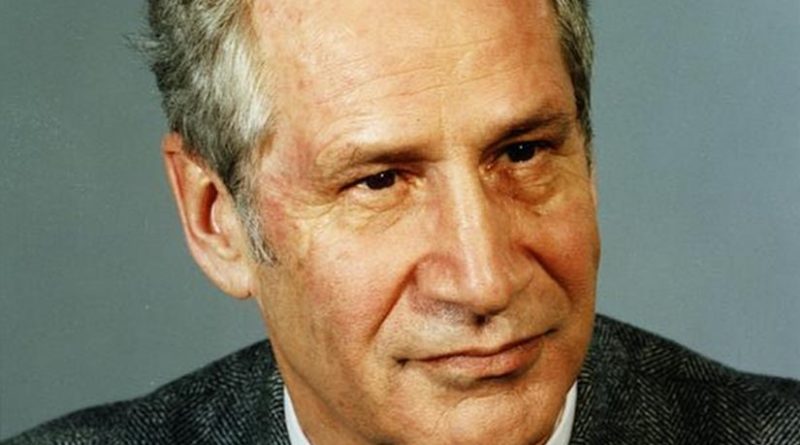 There has never been so little written or so little information provided, for one of the most diabolical, mentally sick, and twisted members of the Human Race as former East German STASI chief and founder, Markus Wolf, who literally embodied the word “evil” in everything that he did, or said, during the decades of terrorism against his own people and the rest of the world, that was his life.

Even more disturbingly, this man (if one could even call him that) pretty much got away scot-free with his crimes against humanity, and was even hired by the fledgling U.S. Department of Homeland Security (“DHS”) in 2003 to re-create and add the final finishing touches to this anti-freedom governmental agency in the wake of September 11, 2001 (the American version of the Reichstag Fire).

The STASI that Markus Wolf created and led plunged Germany into state-sanctioned violence, tyranny, oppression, denial of civil rights/liberties of its citizenry, and otherwise spied on and surveillanced the entire East German population at the behest of their Oligarchs/Plutocrats, who insecurely clung to their own power in the face of ever growing populist awareness and revolt by the purposefully deprived masses.

Indeed, this man Markus Wolf was by self-admission a sexual deviant and bully, similar to his mentor and protégé Lavrenty Beria, Secret Police Chief of former U.S.S.R. Prime Minister Jozef Stalin, who often kidnapped, raped, and murdered girls as young as 12 years old, leaving them dead by the roadside, often incorporating both personality foibles in his grip of control over each and every aspect of his captive East German population, as well as on foreigners who dared to get involved with his daily trampling on the human rights of the people who he was ordered to corral and control on behalf of his Oligarch/Plutocrat paymasters within the big banks, corporations, royal families, and other well-heeled but insecure financial sponsors within East Germany.

His entire life and career within the East German STASI is a warning to the American People who could easily come under and fall prey to the ever increasing and encroaching power of the U.S. Police State being assembled and formed under their very own eyes, unless the People take a stand, and keep a watchful eye on the tyrannical men and women who are trying to recreate this spy agency within these 50 states.

Markus Johannes “Mischa” Wolf was born in Hechingen, Province of Hohenzollern (now Baden-Württemberg), to a Jewish father and a non-Jewish mother on January 19, 1923, and was founder and chief of the Main Directorate for Reconnaissance (Hauptverwaltung Aufklärung), the foreign intelligence division of East Germany’s Ministry for State Security (MfS, commonly known as the “STASI”).

He was the MfS’s number two for 34 years, which spanned most of the Cold War.

It is said that Markus Wolf was totally ruthless and exploited any person’s weaknesses with great precision and a total lack of compassion, and that he often said that “no one who touched his intelligence service would be forgotten, and no debt would ever be cancelled.”

Markus Wolf ran the East German security service for most of the Cold War and was accused of countless acts of kidnapping, coercion, and causing bodily harm, amongst other myriad war crimes against humanity, over the several decades that he was STASI chief.

His father was a member of the Communist Party of Germany, and after Adolf Hitler gained power, Wolf escaped to Soviet Communist Moscow with his father, via Switzerland and France, because of their Communist connections, beliefs, and because Wolf’s father was Jewish.

In 1953, at the age of 30, Wolf was among the founding members of the East German foreign intelligence service within the Ministry for State Security.

As intelligence chief, he achieved great success in penetrating the government, political, and business circles of West Germany with spies, predominantly using his targets’ deviant sexual appetites, penchant for drugs, susceptibility to bribery, or just outright physical violence, blackmail, and extortion on his targets to do so.

For most of his career, Wolf was known as “the man without a face” due to his elusiveness, but also because the major banks/oligarchs/plutocrats actively protected his identity.

It was reported that Western agencies did not even know what the East German spy chief looked like until 1978, when he was photographed by Säpo, Sweden’s National Security Service, during a visit to Sweden.

His STASI carried out widespread repression of its own people through a network of tens of thousands of informers and “gang-stalkers” using the “Zersetzung” program, meaning “targeted psychological degradation,” and routinely harbored international terrorists, such as Carlos the Jackal, one of the world’s most notorious terrorists, as well as the murderous Red Army Faction that terrorized West Germany, as well as the Palestine Liberation Organization (“PLO”).

Through Markus Wolf, the PLO was trained in hidden camps in East Germany in guns, explosives, and guerrilla tactics.

In September 1990, shortly before German reunification, Wolf fled the country, and sought political asylum in Russia and Austria.

When he was denied entry, he returned to Germany where he was arrested by the recently re-united German police for crimes against humanity.

Markus Wolf claimed to have refused a lucrative financial offer, new identity, and home in California from the Central Intelligence Agency (“CIA”) to defect to the United States, simply because the CIA apparently loves NAZIs and war criminals so much, as was evidenced by their taking in of 15,000 or more of them after World War 2 in Operation Paperclip.

In 1993, he was finally convicted of treason in Germany in a “sham/show trial” to satisfy the masses and other global human rights supporters, by the Oberlandesgericht Düsseldorf, and sentenced to six years imprisonment.

However this conviction was later quashed by the German supreme court, because Wolf was “acting from the territory of the then-independent GDR.”

In 1997, he was convicted of unlawful detention, coercion, and bodily harm, and was given a “suspended sentence” of two years imprisonment, which was a complete and total slap on the wrist for his decades long war crimes against his own people, and the rest of the world.

Insanely, according to Adinda Akkermans in her seminal and informative article, Why Former Stasi Is Treated With Kid Gloves;

“many former STASI members are still in public office in Germany today…in fact, they’re on the offensive when it comes to victims looking for recognition…Former STASI Officers include former guards (of) Angela Merkel…In 2009 it was revealed that approximately seventy thousand current employees of the German government used to work for the STASI …the GDR secret service has been partly responsible for over 200,000 political prisoners, and about a thousand deaths of East Germans who tried to flee the GDR…another explanation for the mild treatment of former STASI after the fall of the Wall is that it concerned 91 thousand Germans, and hundreds of thousands of ‘informal collaborators’ who betrayed their friends, family and neighbors to the secret service (gang-stalking, ie, Zersetzung)…if all these people had lost their positions, it would have led to major turmoil and dissatisfaction within German society…victims of the GDR regime have difficulty stomaching the fact that former STASI staff are still treated with kid gloves…For example, names of STASI officers have been removed from public archives…In fact, parts of these archives are no longer freely accessible because of lawsuits filed by former STASI members appealing to their privacy…Many associates of the past secret service have managed to have references to their past removed from books and exhibitions…”

Unfortunately, Markus Wolf died in his sleep at his Berlin home on November 9, 2006, rather than in a jail cell or by firing squad like he did to so many of his victims, probably numbering in the hundreds of thousands, if not millions of innocents during his lifetime and by his own hands.

Home » Markus Wolf: The New World Order Anti-Christ Who Got Away With It – OpEd

3 thoughts on “Markus Wolf: The New World Order Anti-Christ Who Got Away With It – OpEd”