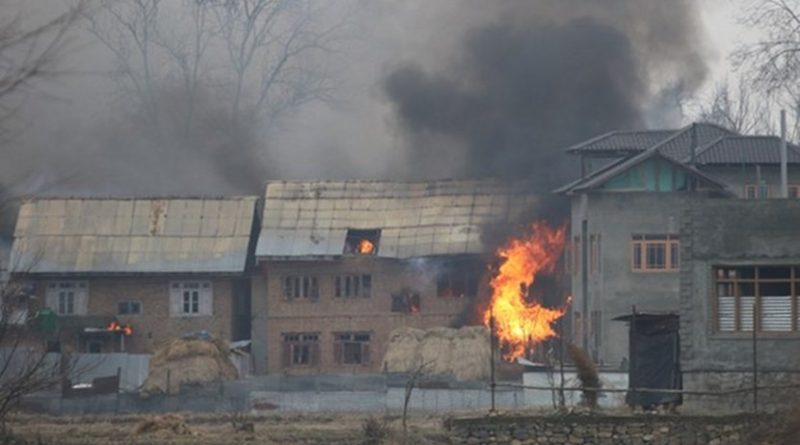 One more terrorist attack has now taken place in Kashmir on February 14, 2019, when around 40 Indian soldiers lost their lives and several others have been injured. This is one of the biggest and serious attacks in recent times.

This terrorist attack has raised considerable anger and sadness amongst the Indian citizens living in India and abroad. Many Indians wonder how to deal with this situation due to the acts of some extremist groups who seem to be crude and ruthless.

One cannot see any difference in motive and character between the terrorist attacks in Kashmir and several other places in the world in recent time and China’s aggression in Tibet around six decades back.

China’s occupation of Tibet by forced entry and terrorist attempts to take over Kashmir by militant methods do not have the approval of the local population. People have been forced to remain silent due to the fear of violence and revenge that would be inflicted on them by the terrorists and aggressor. The elections conducted in Kashmir have shown participation by large segment of citizens whenever they were assured of safety and security to cast their votes.

There is a difference with the terrorist attacks that take place in Kashmir and in Europe and Americas. The terrorists operating in Europe or Americas do not enjoy any support from any particular government but the terrorists are independent groups and outfits.

In the case of Kashmir, it is not secret anymore and it is well known that the terrorists operate from their bases in Pakistan. What is particularly shocking is that while Pakistan itself has suffered from several terrorist attacks by extremist Islamic groups, it has no hesitation in providing supporting base for the terrorists to operate from Pakistan soil to launch attacks in Kashmir. On several occasions, the Pakistan government and senior politicians in Pakistan have described the act of terrorism in Kashmir as an independent movement and Pakistan openly says that it supports such activities in Kashmir.

The terrorist attack on Kashmir and China’s open support to Jaish-e-Mohammed “The Army of Muhammad”, abbreviated as JeM, which is a Pakistan-based group active in Kashmir indicates China’s support to act of terrorism and it’s continued implicit stand that it’s violence on Tibet is justified. The motive of JeM is to separate Kashmir from India and merge it into Pakistan. It has carried out several attacks primarily in the Indian state of Jammu and Kashmir. It also maintained close relations with Taliban and Al-Qaeda in Afghanistan and continues to be allied to them. China continues to refuse to support India’s efforts to ban the terrorist group JeM all over the world. This refusal clearly shows China’s real face.

Obviously, there is considerable uncertainty in Government of India as to what extent India should go in defeating the terrorists by using force. There are still number of human rights activists in India and abroad and followers of Mahatma Gandhi, who may not approve use of force by India to kill the terrorists and wipe out the terrorists mercilessly.

While Lord Buddha and Mahatma Gandhi advocated ahimsa and non violence , they have also clarified on several occasions that non violence do not mean fear and surrender to violence. During second world war, Mahatma Gandhi offered support to the British government in it’s war against Hitler’s Germany, since Hitler represented the evil force.

The problem faced by India in tackling the terrorists in Kashmir is that India has to necessarily attack them who are operating from Pakistani soil or Pakistani occupied Kashmir soil. It virtually means that it would be an attack on Pakistan.

It is very well known that large section of people in Pakistan are unhappy about the terrorists and think that terrorism should be suppressed at any cost. Attack by India on Pakistani soil will inevitably mean attack on Pakistani citizens and not terrorists alone and India would not like this situation.

Pakistan should give up support to terrorist group

Pakistan economy is in distress and financial conditions are extremely alarming. It is suffering from several socio economic problems with no indication of being solved in the immediate future. It has now taken huge loan from International Monetary Fund to stay afloat. Certainly, Pakistan cannot afford a war with India.

If Pakistan thinks that it can continue to support the terrorists in Kashmir even risking a war with India with China’s support , it would be a terrible mistake and the Pakistan government should have the wisdom to realize this. Pakistan should also know that in today’s international situation, China cannot afford to come to the aid of Pakistan in case of a war with India , as China has high trade interests in India and currently faces trade war with USA.

Tibet remains today as the standing monument of the “success” of aggression and oppression. The world should not ignore this, which would only motivate the resolve of the terrorists like JeM and China in their violent and aggressive pursuit