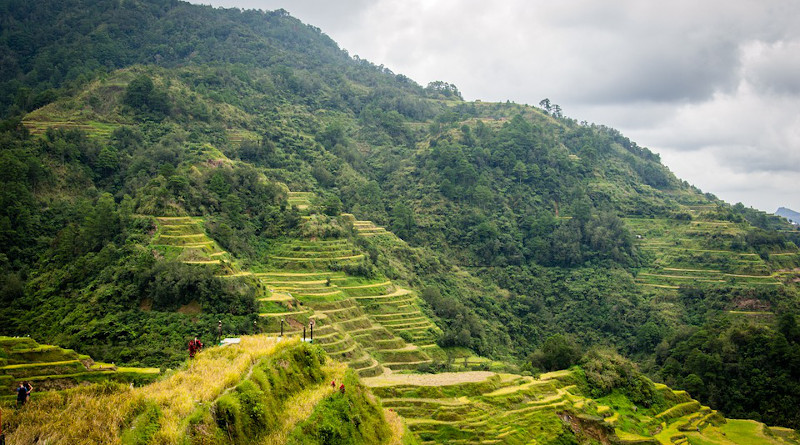 Hidden in the vastness of the Philippine Cordillera Mountains is a stairway to heaven, dubbed by the United Nations Educational Scientific and Cultural Organization (UNESCO) as the 8th wonder of the world. It is an engineering feat unmatched in the world and as mysterious in how it was constructed as the great pyramids of Egypt.

The stairways, however, are crumbling, no thanks to modern man’s folly.

Known as the Banaue Rice Terraces, the terraces lie at an altitude of more than 1500 meters and, if connected, can span 2,000 miles. Not even the American Society of Civil Engineers (ASCE) can explain how, in year 1000 B.C., such an engineering ingenuity could have been constructed without the help of modern tools and equipment.

The ASCE commemorated the terraces in February 17, 1997 as an International Historical Engineering Landmark. It reasoned that, “The civil engineering principles of hydrology, sustainable development and efficient use of water sources and irrigation are all embodied in the careful design of this remarkable ancestral land management program that has never been rivaled.”

The terraces were built and maintained by the sturdy indigenous people, the Ifugaos (current population less than 350,000). The oldest and most extensive rice terraces in the world, it rearranged part of the Grand Cordillera Mountain Range of the country from bedrock to topsoil.

The terraces are pond fields set along the mountainsides with stone retaining walls that serve as dikes and walkways. The system brings forest water from 1800 meters high down to the lowest tiers.

The terraces are bordered by sturdy stone and mud walls that can reach as high as 20 feet and are constructed along the land’s natural contours. When one terrace was completed, the process was repeated from valley floor to mountain peak.

How the Terraces Were Constructed

Incredible skill and ingenuity were employed by the Ifugaos in the productive treatment of water, soil, rock and stone as well as the use of flora and fauna, hand implements and human labor.

Harold C. Conklin, in his Ethnographic Atlas of Ifugao (Yale University Press), explained that the Ifugaos have the uncanny knack of transforming and transporting any form of rock, soil and water. “For hundreds of years, Ifugaos have diverted stream water for irrigation up to five to six kilometers. Using the stream’s current and sheer manpower, they rolled stones and small boulders from mountaintops and formed these as rock walls to hold mountainsides and create rice terraces.”

Boulders too large to be rolled by hand with the help of water currents were broken down into smaller pieces. Below the mountaintops, valley slopes and ridges were reshaped by hand and well-maintained ponds were created, Conklin explained.

The Ifugaos’ ancient terraces consist of four visible parts: a plot of inundated enclosure (bawang) rimmed on the outer edge by low retaining dikes or bunds called banong, and surrounded by artificial or natural slopes below the dike on the downhill side (longyah) and by slopes rising from the inner flooded area on the uphill side (loba).

The terraces’ edges are marked with stones laid across a concave slope, backed by heavy broken fill to withstand the weight of water in the pond. To allow for proper drainage, an underground drainage conduit kept free from gravel and silt by means of bundled sugar cane trunks protected by flat rocks were systematically built on the sides of the terraces. The same conduit provides water for the terraces further below the descending terraces.

“Ifugaos, unknowingly, were crafty masters of engineering, practicing the principles of civil engineering for thousands of years with not much more than their hands, feet and primitive tools,” Conklin recounted.

The height of each terrace in Banaue is from 12 to 20 feet with some reaching as high as 50 feet. At every terrace, a layer of hard-packed earth was laid on top of the rough gravel fill. This tamped, smoothed horizontal terrace provided material for the first layer of earth covered for the top of the wall. Finally, clay was used as topsoil and spread over the terrace bed at 50 cm thick.

Conklin explained that the surface of the terraces is made to tilt slightly downward towards the wall and not the embankment to safeguard against loss of water and mudfish that are normally raised together with rice and yam. Mud and clay are also pasted within the inner side of the embankments to prevent water seepage.

All terraces have one water inlet and one outlet. To prevent clogging, each terrace has a second outlet one foot above the first outlet. Conklin writes that, “by steady annual cutting, filling, damming and repair work, Ifugao farmers greatly strengthened and improved their pond-field holdings. It involved heavy work over many seasons and even generations.”

John Fowler’s web page entitled, “The Ifugao: A Mountain People of the Philippines” says the Ifugao’s unique understanding of hydraulic technology and excellent stonemasonry skills by the simplest hand tools has enabled them to create the world’s most extraordinary system of rice terracing.

The Ifugaos employed agricultural engineering, perhaps as old as that of the Incas and the Mayas. This is evident by the snaking ingenious stone line channels and hollow logs and bamboo aqueducts used to transport water from several miles across canyons and chasms around mountainsides.

“For countless years, hydraulic control and prevention of excessive run-off and erosion, the Ifugaos were able to preserve their watersheds and forest cover, something unparalleled over the course of history,” Fowler said.

While the terraces have withstood the wrath of adverse weather conditions for hundreds of years including the Second World War that tragically affected the Ifugao, they are now facing a threat that in itself was the reason for their creation—poverty.

The late Regional Director Faustino K. Maslan of the Department of Agriculture warned “the terraces are slowly being eroded due to cash crop cultivation: a practice harmful to the ecological balance that produced rice for food security and kept the forests intact.”

“Many Ifugao farmers are shifting to vegetable production which promises more income in a short time compared to rice which takes six months to grow and offers less market value,” he added.

As it is, poverty prevails in this province of 320,000 people, which is recorded by the government as being one of the twenty poorest provinces in the country. “In this land, where creeping poverty is faster than rural development efforts, farmers are left with no choice but to turn their once tourism-valued terraces into lands for farming livelihood,” said Maslan.

Indeed, since 1947, the terraces captured the imagination of tourists worldwide who yearly flocked to the Philippines to get a glimpse of the so-called “eighth wonder of the world”. The terraces are spectacular, particularly after rice is planted where a long spiraling green meadow covers the mountainsides, and also before harvest time during sunset when golden rice spikes cover the towering mountainsides.

“Nowhere have I seen such a magnificent live splendor. Most of the old wonders of the world are unmoving, dead and ancient monuments like the Pyramids, Taj Mahal, Borobudor, Angkor Wat and the Incan civilization,” Dr. James. K Masterton wrote in his fascinating book Capturing the Asian World through History in 1975.

Foreign tourists have contributed much to the province’s coffers until 1988 when Maoist rebels of the New Peoples Army (NPA) made it dangerous for tourists to travel. Today, tourism has picked up but many are dismayed by what they see.

In 1993, government provincial officials made an ocular survey of the terraces and found that almost half of the terraces were deteriorating due to erosion, neglect and soil run-off .

What followed was more catastrophic because not only were factors of nature contributing to the degradation but also men’s activities. The aggravation of the terraces was observed when giant mole crickets were discovered gnawing away through the mudpacks that prevented water seepage. Mysteriously, this was followed by the presence of large earthworms that bore through many of the dikes.

Agriculturists such as George Facsoy of the environmental group Cordillera Ecological Center suspect the entry of pesticides used by vegetable farmers has caused a shift in the natural food chain in the area causing the appearance of pests previously unseen in this region.

“When you eliminate rice and replace it with other crops, obviously the harmful and beneficial insects of rice are eliminated. What you will have are other insects brought about by exotic crops which may not have natural enemies in the locality; such is pest regeneration,” Facsoy claims.

Department of Agriculture officials tend to agree. Deogracias Buenaventura, former provincial head of the agency said, “Chemicals used by vegetable farmers who were once rice growers may have an effect on the earthworms and mole crickets. As it is, mutation of insect species is caused largely by chemicals, obviously referring to the giant mole crickets and earthworms”, he added.

The problem has caused the government to establish the Ifugao Rice Terraces Commission (ITC) aimed at rehabilitating the terraces and bringing back rice farming into the terraces.

The then-President Fidel V. Ramos created the Commission by virtue of the Executive Order No. 158. The ITC formulated long-term and short-term plans for the restoration and preservation of the Rice Terraces.

However, since there was no government agency directly involved in the rehabilitation of the terraces and there was no funding, the Commission was abolished.

Today, UNESCO warns it may remove the terraces from its World Heritage List because not much is being done to save the terraces. The International Union for the Conservation of Nature (IUCN) also warns that if the ongoing destruction of the terraces is not arrested, widespread damage may be irreversible.