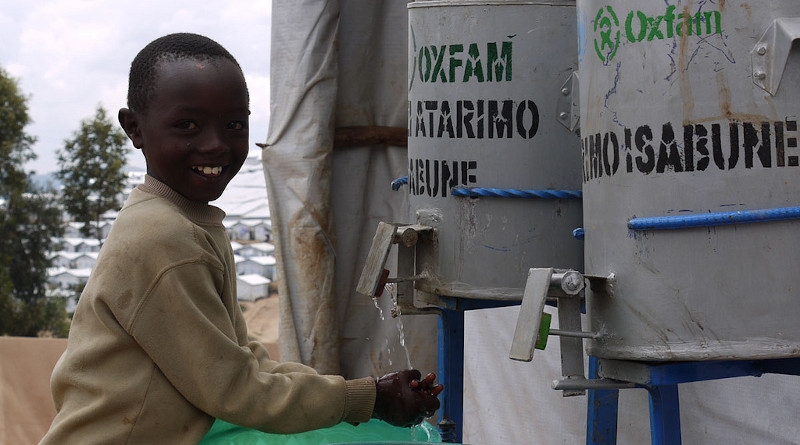 Handwashing is a crucial coronavirus defence strategy, but millions of the world’s most vulnerable people have no access to water.

Yet slightly dirty water such as that which has been used for laundry is still effective when combined with soap, handwashing specialist Myriam Sidibe from consumer product company Unilever told SciDev.Net ahead of World Water Day on 22 March.

The World Health Organization says one in three people – about 2.2 billion – live without safe drinking water. And the competition for water is likely to increase, with UNESCO estimating 5.7 billion people could struggle to access water for at least one month a year, by 2050.

“When water is scarce it is prioritised for tasks other than handwashing,” says Sidibe, who leads efforts by Unilever to encourage hand washing in Asia, Africa, the Middle East, and Latin America. “This is why, from a public health point of view, we consider water quantity just as important as water quality.

“It’s not ideal from a dignity perspective, but the evidence is it’s better to wash your hands with laundry water than not wash your hands. You don’t need to have perfectly clean water for handwashing… if you use soap, hands can still effectively be cleaned.”

The Water Supply and Sanitation Collaborative Council (WSSCC), a UN-based organisation, says the coronavirus pandemic is a “hygiene crisis”, and there is a clear link between water access and a community’s ability to contain the spread of the virus.

Nearly 3 billion people lack handwashing facilities with soap and water at home, while 900 million school children, as well as one in six health care facilities, have no basic hygiene services, the ‘Progress on drinking water, sanitation and hygiene: 2000-2017’ report found.

“Worse still, many of those 3 billion people are in the most vulnerable situations: those with disabilities, the elderly, women and girls, displaced people, indigenous populations and those living in the hardest-to-reach rural areas,” the WSSCC says.

“What happens when the urgency to contain and stop the impact of COVID-19, or for that matter cholera, polio, measles and Ebola, reaches populations unable to respond?

Sian White, a researcher on water, sanitation and hygiene behaviour change at the London School of Hygiene and Tropical Medicine, says people living in water-stressed regions have to make decisions about how they use their limited water resources.

“In such settings we also see people just rinsing their hands with water rather than using soap because this is perceived to increase the amount of water required,” White told SciDev.Net.

“The lack of water in many low- and middle-income nations makes populations vulnerable to outbreaks of viruses because they are unable to sufficiently protect themselves through basic hygiene.”

White says it is easy for many people to forget how vital water is in our daily lives. “For many women and girls in low- and middle-income settings, it’s impossible to forget – globally they spend a collective 200 million hours collecting water every day,” she says.

Fiona Broom is the Acting Global Editor of SciDev.Net

*Fiona Broom joined SciDev.Net in February 2020 after six years as an independent journalist – including writing for SciDev.Net Asia & Pacific, and other major international news outlets. She has worked as a journalist and editor since 2009. This article was published by SciDev.Net.