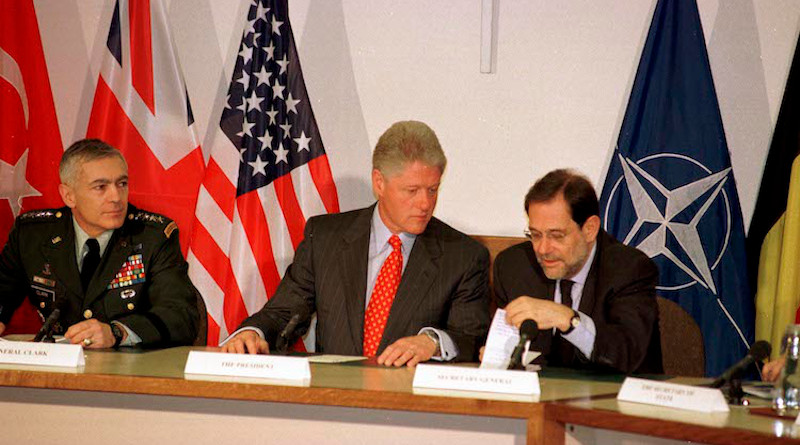 US President Bill Clinton (centre), the architect of NATO's expansion up to Russia's borders, with NATO Secretary General Javier Solana (right) and General Wesley Clark (left), the Supreme Allied Commander Europe of NATO from 1997 to 2000, at NATO headquarters. Credit: NATO.

The greatest American foreign affairs columnist since Walter Lippmann was William Pfaff of The International Herald Tribune. He wrote in his path-breaking book, “Barbarian Sentiments” that the US political atmosphere was full of “exhausted ideas, like a dead star”. Nevertheless, “these ideas remain central to the way certain subjects are discussed and to the formulation of national policy. These are ideas that people want or need to be true”.

I was told by the editorial page editor, Serge Schmemann, that when the New York Times bought the Herald Tribune, the paper decided to cut back on printing Pfaff after 20 years of using him because he was considered anti-American – which, ironically, was one indication that he was right in his diagnosis.

Freud reminded us in his “Civilization and its Discontents”, that we should “familiarize ourselves with the idea that there are difficulties attaching to the nature of civilization which will not yield to any attempt at reform”.

So it is in America. As Irving Kristol has said, the task of the neo-conservative intellectuals, who have been a significant influence on foreign policy over the last 40 years, is “to explain to the American people why they are right and to the intellectuals why they are wrong”. That is the easy way out of Freud’s dilemma. For those who disagree with them it is very much harder.

In such a political climate, what hope is there for fresh ideas? As Pfaff has written, “In place of a re-examination of the old liberal political ideas, there is, in essential respects, their reiteration”.

Hence the failure of President Barack Obama and probably the failure of Joe Biden, if and when he becomes president. Obama at the onset of his eight-year presidency said changing policy was like a giant oil tanker making a U-turn at sea – it would take a long time to accomplish. But he never achieved that.

He may have damped down the US instinct to intervene in foreign countries. Nevertheless, even he stepped up the number of troops in Afghanistan when failure was obvious, intervened in Libya and helped the French overthrow Muammar Gadhafi, precipitating a civil war and a chaos the country had never known, and failed to put right in Iraq what his predecessor, George W. Bush, had rent asunder.

Biden will probably not much change the course from Obama’s day although he certainly will not emulate President Donald Trump. What sentimental and self-aggrandizing ideas the American culture displays! America is not the norm in the world despite it thinking that about itself for 200 years or more.

Only Bernie Sanders or Elizabeth Warren would try to do undo that – and even they reiterate the negative sentiments on Russia and China so common in American political discourse. “America’s problem is how to free itself from the grip of its exhausted ideas”, writes Pfaff. If it can, there will be no more failed wars like Korea, Vietnam, Iraq, Afghanistan, Libya plus its confrontation with Cuba, all of which the US lost and chose to withdraw from with its tail between its legs.

The US could even become friends with Russia, Iran and China again. Vladimir Putin, as did Mikhail Gorbachev, wanted at one time to see created “a common European house”. This might well have evolved into membership of the European Union. But America forestalled that possibility with its expansion of NATO, done with the connivance of its weak-kneed European allies who in their hearts didn’t fully agree with Washington’s policies but went along with them for the sake of NATO unity – a mistake of historical proportions, as Zbigniew Brzezinski argued.

Before the deed was done, a big majority of America’s top academic political scientists said this in a letter to President Bill Clinton, the architect of NATO’s expansion up to Russia’s borders but he did not listen. In foreign policy, Clinton was not a liberal Democrat, he was a neo-conservative. Ill-fortune shows her power, wrote Machiavelli, when no wise measures are taken to resist her.

A conciliatory Russia or China could ameliorate this. But it probably won’t happen until Europe takes the first step forward. European thoughts are not American thoughts. Europe still has, somewhere buried in its soul and religious foundations, in its architecture, paintings, literature and music (both classical and popular, from Tchaikovsky to Paul McCartney) a very different way of looking at the world.

Europe has learnt the hard way with its world wars that state violence exacts a terrible, blood-soaked, cost. Hence the creation of the European Union, a successful attempt via the means of economic, financial and social policy to bring out the best in European/Christian political thought – the binding together of former war-like nations into a peaceful whole.

America is too complacent about Europe. Europeans are waking up to seeing that NATO policy towards Russia has done great harm. They have felt compelled to oppose the excesses of US power as exemplified in the persona of Donald Trump. The post-war relationship between the US and Europe has changed for the better and will doubtless continue to be like this, a distancing from Washington’s viewpoint, once he is gone.

Once the Europeans decide to part from America on the big political issues – as they have already on Iraq, Afghanistan, Iran and Yemen (and as a generation ago they did on Vietnam), the relationship with Russia will undergo a major defrosting. America should not be complacent about European attitudes. We can already see this evolution of Europe’s posture in President Emmanuel Macron of France and, to a lesser extent, in Chancellor Angela Merkel of Germany.

America’s ‘Manifest Destiny’ is coming to its end.

Home » America Is Sadly In The Grip Of ‘Exhausted Ideas’ – OpEd