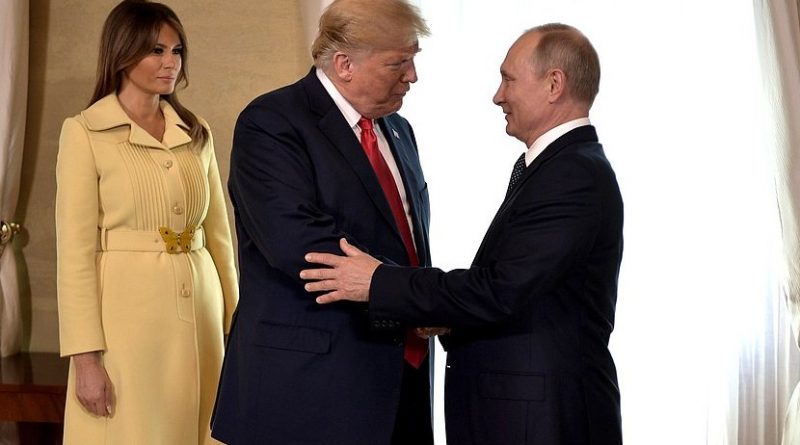 Last week, U.S. Secretary of State Mike Pompeo and Polish Defense Minister Mariusz Błaszczak signed a document that represents a diplomatic anomaly for the Trump administration – a strange, pattern-breaking agreement which helps separate the president’s rhetoric from his actual policy. And with mere months to go before the November election, the revelation couldn’t have come at a more opportune time. The Enhanced Defense Cooperation Agreement​, signed in Poland during the Secretary’s tour of Eastern Europe, could be easily mistaken for just another U.S. attempt at placating Iron Curtain alumni, but upon close examination, the document clearly authorizes future increases in American military presence in the country. For the purposes of understanding what Trump’s true governing style is, that’s a big deal. Here’s why:

The significance of such a treaty would’ve been negligible just five years ago. Since the fall of the Soviet Union, Republican and Democratic administrations have made it a priority to solidify ties with former vassals of Moscow, indirectly encircling the Russian bear by creating a series of satellite states that could successfully keep that old rivalry dead. It was one of the very few bipartisan elements of foreign policy left intact after decades of Washington political infighting. For better or worse, starting in 2016, President Trump made clear his doubts on the concept.

His campaign from the beginning was filled with challenges to traditional U.S. foreign policy, not entirely surprising considering his entire movement was based on an insurrection against what he and his supporters labeled, ‘the Establishment’. His surprise victory against Hillary Clinton that year became a source of great anxiety for the global community; particularly for our European Allies. And his comments on organizations such as NATO and the UN made it impossible to properly analyze his potential governing style.

That anxiety, in many ways, never subsided. The Trump administration quickly devolved into an oddity of mismatched statements that weren’t guaranteed to even represent the realities of his own government. In 2017, while the president was publicly ​questioning​ the validity of NATO, Secretary of Defense James Mattis was privately reassuring Angela Merkel’s government in Berlin that no such policy changes were on the horizon. As President Trump railed against the Iran Nuclear Agreement and accused Tehran of repeatedly violating the treaty, Gen. Joseph Dunford, the chairman of the Joint Chief of staff, ​testified​ to the contrary.

“The briefings I have received indicate that Iran is adhering to its [plan of action] obligations,” Dunford wrote in answers to policy questions in advance of his Senate Armed Services Committee confirmation hearing to serve a second term as chairman of the Joint Chiefs. “The [plan] has delayed Iran’s development of nuclear weapons,” he wrote. “Iran has not changed its malign activity in the region since [the plan of action] was signed.”

The President has also repeatedly​ threatened​ to target Iranian cultural sites in the event of a potential conflict, which would violate international law. Following comments such as these, someone, usually current Defense Secretary Mike Esper, quickly steps in to ‘clarify’ their meaning. Sometimes just flatly denying them entirely. When directly asked about Trump’s threat during a Pentagon briefing, Esper ​replied​ dryly, “We will follow the laws of armed conflict.” After Trump claimed that the tragic explosion in Beirut in mid-August was, “caused by a bomb of some kind”, Esper once again quickly squashed the story. “Most believe it was an accident,” he​ told​ reporters.

It seems members of President Trump’s administration have had yet another role added to their job descriptions: glorified verbal janitor, constantly on call to quickly clean-up and dispose of off-hand comments made by the commander-In-chief. These are not sworn enemies on Capitol Hill lashing out against the president; these are his own appointees, trusted counterparts that he crows have his full confidence. That is, until they ultimately resign and condemn their former boss.

It’s clear his more extravagant inclinations on America’s role in the world are rarely indulged, but his tendency to embrace a flirtation with non-interventionism has had a noticeable impact. In the last four years, the U.S. has withdrawn from the TPP, NAFTA, WHO, and most recently, withdrawn troops from Germany and Syria.

In fact, that’s been the trend recently. As he proceeds further into his term, his foreign policy has become more defined and recognizable. And the picture that has been painted isn’t a reversal to pre-WW2 isolationism; instead, it’s been a foreign policy based on the personal feelings of the president in each situation, with no real concrete doctrine or philosophy behind each decision.

The president ​claims​ to have removed troops from Germany earlier this year as a protest against a lack of monetary support from Berlin; however, most of those troops were moved next door to Poland, which has not increased said support. After boasting of a tough, no-nonsense approach to Islamic State, the president abandoned the United States’ Kurdish allies in the region, justifying it by saying that the ethnic group didn’t offer America support during World War 2; specifically, the Allied invasion of Normandy. “They didn’t help us in the Second World War; they didn’t help us with Normandy,” Trump ​said​ of the Kurds. He added, “that being said, we like the Kurds.” The announcement of the withdrawal of US support came suspiciously after the Turkish army began an offensive against the Kurds in northern Iraq and Syria.

It is precisely because of the president’s actions of the last few months that the US-Poland Enhanced Defense Cooperation Agreement matters, because it clearly reinforces the fact that the president’s policy hinges on his own, personal view of each nation.

According to the State Department​, part of the agreement’s purpose includes, “[providing] a mechanism for the sharing of logistical and infrastructure costs for U.S. forces present in Poland. By creating a durable framework for even closer defense cooperation with a crucial NATO ally, it strengthens Eastern Flank security and deterrence. Poland’s in-kind contributions under the EDCA will directly benefit the Polish economy. For its part, the United States will continue to bear the costs of training, equipping, and deploying U.S. forces to Poland, which is significantly higher than the cost of support Poland invests in support of U.S. forces once they are in country. Together, these efforts improved security and stability for both nations in a cost-effective way. The United States and Poland’s extensive coordination and consultation on defense matters will be strengthened and streamlined by the EDCA.”

This doesn’t exactly sound like the man who once ​confided​ in his advisors that he was considering leaving NATO altogether. In fact, the agreement’s text itself admits freely that the United States will continue to pay the vast majority of the cost for its troop deployment to Poland, a notion which Trump found much less-desirable in Germany.

While some would find the concept of a personal-feelings based approach to foreign policy unimportant, it’s a drastically different strategy of dealing with American policy that could be potentially disastrous. Presidents have always, of course, had personal notions of particular leaders and nations which affect their policies, but this has never been the very foundation of their interactions.

While it was very clear that President Barack Obama found Israeli Prime Minister Benjamin Netanyahu to be an ideological opponent during his time in office, nonetheless, U.S. support for the Jewish state drastically increased during the Obama administration. In 2012, the State Department ​approved​ a request for highly advanced bunker-buster bombs that Israel had been seeking for years, after the request was denied by President George Bush. Obama was the first ever chief executive to approve the sale of the equipment. Unlike his Republican predecessors who were critical of Israel’s Iron Dome missile defense system, The Obama Administration ​invested​ heavily in the program, providing almost two billion alone for the project. Obama’s personal feelings of annoyance towards Netanyahu, clearly, never stopped him from supporting the steadfast U.S. ally.

No such reservations have clouded President Trump’s policy. Early into his term, the president reportedly ​called​ UK Prime Minister Theresa May “a fool” and German Chancellor Angela Merkel, “stupid” during phone conferences related to NATO. The interactions became so uncomfortable that Merkel’s advisors ​told​ CNN that the chancellor was forced to limit the number of her officials allowed to join the calls. However, the president has expressed a clear preference for more likeminded, conservative leaders around the world. He’s ​referred​ to Turkish President Erdogan as a friend and effective leader, despite his attempts to dismember his country’s democratic system through increasing his own power, violent crackdowns on protesters, and military incursions into Kurdish territory. Trump has also praised and openly supported Brazil’s far-right President Jair Bolsonaro, whose controversial views, which include ​wishing​ death upon his son if he were to come out as a member of the LGTBQ community, or, as he put it, preferring him to “die in an accident.”

Despite his fierce attacks on China’s increasingly powerful economic influence in the United States, Trump speaks of Xi Jinping with great reverence, ​saying​ in 2019, “I like President Xia lot. I consider him a friend… I like him a lot. I’ve gotten to know him very well. He’s a strong gentleman, right… He’s a strong guy, tough guy.”

In 2019, the president ​said​ of North Korean Dictator and unapologetic mass-murder Kim Jung Un, “Kim Jong Un has been, really, somebody that I’ve gotten to know very well and respect, and hopefully – and I really believe that, over a period of time, a lot of tremendous things will happen.” and in 2018, “[Kim] wrote me beautiful letters and they’re great letters. We fell in love.”

Trump’s strong, personal relationship with Polish President Andrzej Duda, a ​self-avowed right-wing nationalist, undoubtedly played a role in his decision to waive his criticism of European contributions for U.S. military presence and move troops from Germany to Poland. Despite the Polish President’s wife’s apparent ​distaste​ for the American leader, it seems the connection between the two will only continue to grow in the future.

It’s unclear what the results will be of the upcoming U.S. presidential election, but Trump’s style of personal-preference diplomacy has shaken world leaders’ confidence in America’s ability to lead. Whoever takes office in January of 2021, it will be in their best interest to start erasing this perception, and return U.S. policy to being based on what’s in the best interest of the nation, instead of the whimsical fluctuations of whoever happens to be on the chief executive’s ‘good side’ at any particular moment.