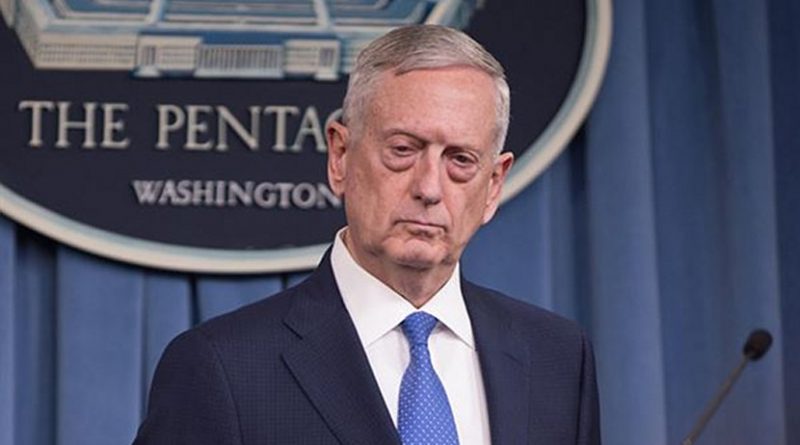 File Photo of US Defense Secretary Jim Mattis conducting a news conference at the Pentagon. DoD photo by Army Sgt. Amber I. Smith.

The United States has always had a love affair with certain generals. George Washington, of course, was immensely popular, and thirteen US presidents were generals before they were president.

But prior to the Second World War, generals as a group were not revered or treated with any particular veneration or respect. In fact, in the nineteenth century, full-time US military officers were often treated with suspicion and contempt. While state militia officers were regarded as indispensable night watchmen who preserved order, the full-time government employees who served in the federal military were often derided as lazy and otherwise unemployable.

But now those days are long gone. In recent decades, active generals and retired generals have grown into a group of politically influential technocrats who can be regularly seen on evening news programs and are habitually feted and promoted as incorruptible patriots. They are fawned over by media organizations while being paid enormous pensions. Moreover, upon retirement they are able to turn their former government employment into lucrative positions on corporate boards and throughout the private sector.

The immense deference and trust placed in the opinions and alleged expertise of these men is far beyond what is warranted.  Like all technocrats—whether we’re talking Supreme Court justices or public health bureaucrats—the generals have their own interests and their own agendas. This was recently highlighted by the president’s new public feud with some generals. At a Labor Day press conference Trump averred: “The top people in the Pentagon probably aren’t, because they want to do nothing but fight wars so that all of those wonderful companies that make the bombs and make the planes and make everything else stay happy.” It’s always difficult to guess Trump’s motivations and earnestness when he makes statements such as this, but the statement itself isn’t wrong. The generals—retired and not— are often deeply enmeshed with weapons manufacturers and tech firms that rely on Pentagon spending.

It’s difficult to see why the nation’s generals enjoy such a stellar reputation.  The US military establishment has lost every major military endeavor since 1945 and has been shown to be fiscally inept at a level that could only be described as criminal indifference. The Pentagon has repeatedly failed audits and has “misplaced” trillions of taxpayer dollars.

Yet in spite of this impressive record of failure and incompetence, generals continue to be held up by pundits and media organizations as the men who somehow care more about America than anyone else. Moreover, as is typical for technocrats, the generals are used by the establishment to provide intellectual and ideological cover to those who wish to forever expand US military adventurism and intervention. The alleged expertise of the generals—although apparently insufficient to actually win any wars—is said to offer us great insight into how American foreign policy ought to be conducted today.

Needless to say, this view of the generals veers far from the reality. Moreover, the generals may now be morally and ideologically compromised by their deep ties to weapons manufacturers and the corporate boards on which many generals serve.

In a blistering article published at the American Conservative last week, Hunter Derensis explains how the image of American generals as selfless public servants is long past its expiration date:

Perhaps Trump learned the hard way that the generals of the forever wars don’t measure up to the twentieth-century soldiers he adulated growing up.

For instance, when George Marshall oversaw the deployment of 8.3 million GIs across four continents in World War II, he did so with the assistance of only three other four-star generals. In retirement, Marshall refused to sit on any corporate boards, and passed on multiple lucrative book deals, lest he give the impression that he was profiting from his military record. As he told one publisher, “he had not spent his life serving the government in order to sell his life story to the Saturday Evening Post.”

Contrast that to the bloated, top-heavy military establishment of today, where an unprecedented forty-one four-star generals oversee only 1.3 million men[-] and women-at-arms. These men, selected and groomed because of their safe habits, spend years patting themselves on the back for managing wars-not-won, awaiting the day they can cash in. According to an analysis by The Boston Globe, in the mid-1990s nearly 50% of three- and four-star generals went on to work as consultants or executives for the arms industry. In 2006, at the height of the Iraq War, that number swelled to over 80% of retirees.

The examples are as endless as America’s foreign occupations: former Director of Naval Intelligence Jack Dorsett joined the board of Northrop-Grumman; he was later followed by former Air Force Chief of Staff Mark Welsh; meanwhile, former Vice Chair of the Joint Chiefs of Staff James Cartwright went to Raytheon; former Chairs of the Joint Chiefs—the highest ranking position in the military—William J. Crowe, John Shalikashvili, Richard Myers, and Joseph Dunford went on to work for General Dynamics, Boeing, Northrop-Grumman, and Lockheed-Martin, respectively.

Just as former presidents are able to turn their fame into multimillion dollar fortunes (as the Obamas and Clintons have done) generals are able to engage in very similar activities. Derensis continues:

General James “Mad Dog” Mattis, in between his forced retirement from the Marine Corps and appointment as Secretary of Defense, joined the board of General Dynamics where he was paid over a million dollars in salary and benefits. Returning to public life, Mattis then spent two years cajoling President Trump into keeping the U.S. military engaged in places as disparate as Afghanistan, Syria, and Africa. “Sir, we’re doing it to prevent a bomb from going off in Times Square,” Mattis told his commander-in-chief. Left unsaid was that a strategic withdrawal would also lead to a precipitous decline in Mattis’ future stock options, which he regained after he rejoined General Dynamics following his December 2018 resignation.

None of this proves generals are all amoral cynics, of course. It is quite possible to want a safe and prosperous America while also being an opportunist who’s always on the lookout for new ways to turn one’s life of living off the sweat of the taxpayer into some additional easy cash.

But what this all shows us is that it’s time to start viewing the generals for what they are: lifelong bureaucrats who upon retirement are more than happy to use their easy and vaunted experience in government as a means to fame, adulation, and easy money. After all, in the modern world, generals don’t become generals through courage on the battlefield, or even through any particularly insightful thinking or expertise. It’s not 1944, and these guys aren’t exactly George S. Patton.

Today’s generals are politicos, bureaucrats, and Washington insiders whose primary skill set lies in gaining influence in the halls of Congress and on cable TV shows. It’s very easy and rewarding work. If you can get it.