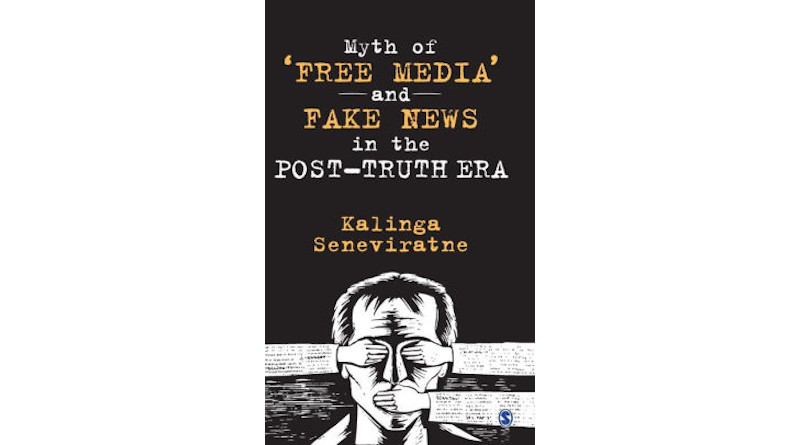 With Julian Assange’s “show trial” in progress in the UK for alleged national security breaches in the US, and a cold war era propaganda campaign between the Anglo-American media and China gathering momentum, a timely new book sheds some light on how the so-called “free media” has ditched its libertarian values.

The book titled Myth of ‘Free Media’ and Fake News in the Post-Truth Era published by SAGE 2020 and written by Sri Lankan born journalist and communication scholar Kalinga Seneviratne* challenges the Anglo-American media’s claim to be an objective ‘free media’. He maintains that the western media fails to understand that objectivity in news is subjective.

The main theme of the book is how subjectivity based on cultural perspectives is ignored by those who peddle the myth of a “free media”.

In the very first chapter, he discusses the Libertarian Media Function Theory (LMFT) – that underpins the western ‘free media’ model where the media is expected to be the “watchdog” of governments’ abuse of power.

While discussing the Authoritarian Media Function Theory, the author takes the example of his own experience in Australia in the 1990s and that of a Dalit journalist in India he interviewed during the research for the book, to illustrate how cultural censorship works in Australia and India, that does not give a voice for minority or marginalized groups.

He also points out that Julian Assange’s Wikileaks has practiced ‘watchdog’ journalism “to its core” but he is being hounded by the very people, who claim to promote “free media”.

Those who have been schooled in the western media theories, especially the LMFT, may find Seneviratne’s arguments not easy to digest and even disagree with these. But, with many examples taken from the international media, he builds a case for a refreshingly new look at what ‘free media’ should be like.

He is critical of both the libertarian and authoritarian models of the media. He argues that McChesney and Herman’s “propaganda model” and Noam Chomsky’s “manufacturing consent” models of media function theories are more valid today than the LMFT.

The chapter on ‘media in crisis’, builds on President Trump’s assertion in his first White House press conference on February 16, 2017 at which he said that much of the mainstream media in the US did not speak for the people, but for special interests, and they benefit from the system.

This chapter applies this argument to the international media, including the media in India. Truth has been commercialized to the benefit of the rich, and news has become a public relations exercise. The theories of ‘manufacturing consent’ and the ‘propaganda model’ are closely examined with examples, such as the Blair government’s ‘weapons of mass destruction’ propaganda in 2003 that led to the Iraq war, and the propaganda campaign to overthrow Gaddafi in Libya in 2011.

He thus argues that commercialisation, corporate interests, propaganda machineries and monopolistic interests have throttled free media – quotes from scholars are given from each end of the spectrum, causing confusion about what should be an ideal model.

A lengthy chapter on subjectivity in news reporting explores the argument that was raised in an earlier chapter whether we really had a “truth era” before arriving at a “post-truth” era? He asks: “Are journalists news vultures whose objectivity is coloured by subjective viewpoints?”

The main theme of the book is hammered out in the chapter beginning with the NWICO (New World Information and Communication Order) debates of the 1970s, author’s own experience as an international reporter, and examples of how different a focus could be given to each story based on cultural perspectives. A case in point is: When US President Obama visited Hiroshima in 2016, media representatives did not ask why he didn’t apologise for the US war crime there. But when Japan’s PM Abe went to Pearl Harbour the focus was on a Japanese apology.

While liberals in Asia may disagree with it, the author believes that the Asian media need to focus on development rights which is collective in nature. He cites as examples western media’s “bias” in reporting of Mugabe’s Zimbabwe; Castro’s legacy in Cuba; ICC war crimes allegations against Africa, UN Human Rights Council’s similar allegations against Sri Lanka; and the use of R2P (Right to Protect) argument against Libya.

It is argued that if the 1976 UN covenant’s development rights are given equal focus on international reporting, the world will be seen in a different context – where western countries and their MNCs would be the biggest violators of human rights.

Referring to research done by two British academics, the author looks at how the British media delegitimized Labour leader Jeremy Corby. He discusses at length the four steps of conducting such a propaganda campaign.  Seneviratne argues that subjective misreporting by the “Fourth Estate” has given rise to a “Fifth Estate” which the former wants to label “fake news”.

In the final chapter Seneviratne explores an alternative to the adversarial “fourth estate” journalism promoted by the libertarian model of journalism. He describes it as “mindful journalism” or what Bhutanese communication scholar Dorji Wangchuck calls “Middle Path Journalism” that draws inspiration from Asian philosophy, especially Buddhism.

Under the headline, “Another World Is Possible”, the chapter offers ideas to redefine and restructure journalism training to focus more on people and community-centric journalism that promotes community harmony rather than focus on conflict and news of exception. A number of examples of such reporting from the Asia-Pacific region are given.

Though it would take a lot of convincing – even for the Asian media – to take a mindful communications path, the COVID-19 has drawn attention to focusing more on people-centric less adversarial journalism.

This book is well researched and written without much academic jargon, and should be compulsory reading for journalism students and practitioners.  As Seneviratne says in his preface “this book is critical of what we often call the ‘free media’, but that does not mean I don’t believe in a free media”. He appeals to readers to approach the book with a mindset of a “free thinker” – where liberalism nor conservatism is the gospel truth.

* Kalinga Seneviratne is a former head of research at the Asian Media Information and Communication Centre (AMIC) and a regular contributor to IDN InDepth News.