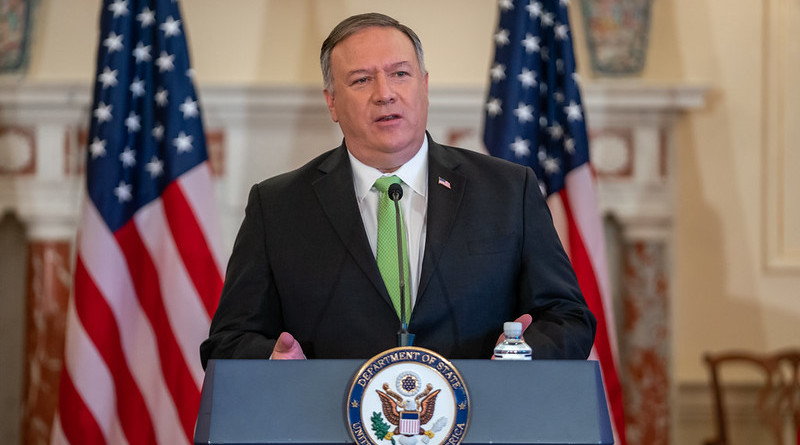 (RFE/RL) — The United States has imposed sanctions on more than two dozen people and entities involved in Iran’s atomic activities or its missile and conventional weapons programs, as Washington unilaterally seeks to enforce a UN arms embargo against the Middle East country.

The punishments are part of a new sanctions offensive by the Trump administration that rests in part on a “snapback” clause from the 2015 nuclear agreement between Tehran and world powers that the United States abandoned two years ago.

“The United States has now restored UN sanctions on Iran,” President Donald Trump said in a statement after he signed an executive order spelling out how Washington will enforce the “snapback.” “My actions today send a clear message to the Iranian regime and those in the international community who refuse to stand up to Iran.”

The new sanctions allow the United States to impose measures — including asset freezes — on any company or individual helping Iran evade the UN arms embargo. It comes two days after Washington unilaterally reimposed the ban.

The Trump administration’s effort has prompted objections from China and Russia and increased frictions between Washington and some European allies over the United States’ legal right to reinstate the embargo.

That, in turn, has raised questions about whether other governments would observe it.

Washington withdrew in 2018 from the multiparty agreement — known as the Joint Comprehensive Plan of Action (JCPOA) — that paved the way for the embargo’s expiration in October.

The September 21 announcement includes new sanctions and export controls on 27 individuals and entities connected to Tehran’s weapons and nuclear industries.

Trump’s statement accuses Tehran of “malign behavior” including the supply of weapons and military support “that fuels ongoing conflict in Syria, Lebanon, Iraq, and Yemen.”

Secretary of State Mike Pompeo said that the United States would use its “new and powerful tool” to punish anyone testing Washington’s resolve to enforce the weapons ban.

“Our actions today are a warning that should be heard worldwide. No matter who you are, if you violate the UN embargo on Iran, you risk sanctions,” Pompeo said.

He said Washington was determined to keep up its “maximum pressure” effort to change Tehran’s behavior.

“We will continue and expand our sanctions until Iran is willing to conclude a comprehensive negotiation that addresses the regime’s malign behavior,” Pompeo said. “We are always open to diplomacy with Iran, but Iran must respond with diplomacy, not with more violence, bloodshed, and nuclear extortion. Until then, maximum pressure will continue.”

Iran has insisted it is not pursuing nuclear weapons, although UN atomic monitors have accused it of obfuscating and misleading about past nuclear activities.

Russian Foreign Minister Sergei Lavrov said the Kremlin viewed the new U.S. sanctions as illegal, but he did not say whether Russian companies would seek to get around it.

Russia has historically been one of the largest suppliers of weapons to Iran.

China and Iran have also reportedly been in talks on a $400 billion trade deal that includes arms.

The Iranian entities sanctioned by the United States include the Ministry of Defense and Armed Forces Logistics, the Defense Industries Organization, and three bodies associated with the Atomic Energy Organization, the country’s nuclear supervisor.

The list of individuals sanctioned by the United States includes Venezuelan President Nicolas Maduro, whom Washington does not recognize as that country’s rightful president and has accused of conducting conventional-arms-related deals with Iran.

In May 2018, Trump withdrew from the deal and restored U.S. sanctions that have crippled Iran’s economy. The other parties — Britain, China, France, Germany and Russia — remained in the deal.

Tehran has announced it has “stepped back” from some of its commitments under the 2015 nuclear deal since the United States withdrew and reimposed tough unilateral trade and economic sanctions two years ago.

Some of those commitments include limits on the size of its stockpile of low-enriched uranium as well as the level of purity to which it was allowed to enrich uranium, according to the International Atomic Energy Agency.