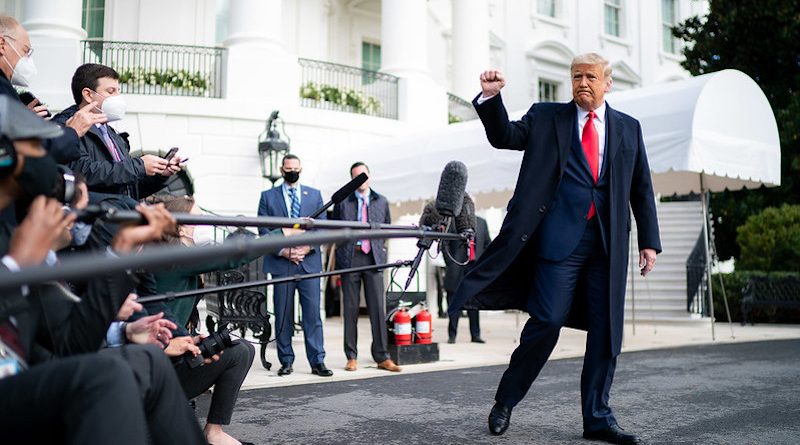 President Donald J. Trump gives a fist bump to the press Friday, Oct. 30, 2020, prior to boarding Marine One en route to Joint Base Andrews, Md. to begin his trip to Michigan, Wisconsin and Minnesota. (Official White House Photo by Tia Dufour)

Some three weeks after the presidential election, Donald Trump is still refusing to concede. While this partially reflects his personal difficulty in admitting defeat, it may also mean that Trump is seriously thinking about a 2024 White House run.

There is only one precedent in US history for a president being elected in non-consecutive terms: Grover Cleveland in the 19th century, when he won in 1884 and 1892. Nevertheless, and despite his advancing age, Trump is reported to be keen to consider a 2024 bid.

In four years, Trump will be about the same age as President-elect Joe Biden is now. Trump’s “game plan” for winning power again may well be to try to emulate the 1828 campaign of Andrew Jackson, an insurgent president many have compared him to already.

In 1824, Jackson came close to winning the presidency when he received the most electoral votes. However, he did not win enough for the required majority in a field of four candidates — Jackson, Henry Clay, John Quincy Adams and William Crawford. In what Jackson later termed the “corrupt bargain,” the House of Representatives elected Quincy Adams as president, despite Jackson’s electoral college advantage.

While the circumstances of the current president’s presumptive loss to Biden are different to those of Jackson in 1824, Trump is seeking to nurture a similar sense of grievance over his loss.

Even after the controversies of Trump’s presidency, he would potentially be a formidable contender in 2024 for the Republican nomination. He performed on Nov. 3 above the expectations set by polls that pointed to an even more handsome win for Biden. While Trump may therefore be down, he is not out and the appeal of “Trumpism” in the US remains strong with key groups.

While the outcome of the 2024 Republican race remains too far away to be certain of any predictions, with multiple candidates who could yet win, history indicates there are patterns to previous races that point to potential success for Trump in winning the nomination, should he choose to stand.

The past few decades of US political history suggest the victor in nomination contests for both major parties frequently leads national polls of party identifiers on the eve of the first presidential nomination ballot in Iowa, and/or also raises more campaign finance than any other candidate in the 12 months prior to election year. On both these counts, Trump could potentially be a strong Republican favorite for 2024.

From 1980 to 2020, the eventual nominee in around half the Democrat and Republican nomination races contested (that is, in which there was more than one candidate), was the early frontrunner by both of these measures.

Moreover, in at least four partial exceptions to this pattern, the eventual presidential nominee led the rest of the field on one of the two measures. This was true of Biden in 2020; Trump in 2016; Republican Mitt Romney in 2012, Democrat Michael Dukakis in 1988, and Republican Ronald Reagan in 1980.

For instance, in the race for the 2020 Democratic nomination, Biden led a majority of national polls of Democratic identifiers for many months before Iowa. While he was not the leading fundraiser from external donations among the Democratic field (Sen. Bernie Sanders edged him on this score) he was well positioned on the money side of the ledger too because of his political connections as former vice president.

On both the fundraising and national poll measures, Trump could be an early favorite to win the Republican nomination in 2024. Moreover, his age would not necessarily be a major impediment, if he maintains good health, especially if Biden seeks reelection, given that the US would by 2024 have had two consecutive septuagenarian presidents.

Of course, if Trump were to win the Republican nomination in 2024, it would not be certain he would win back the presidency. Much would then depend upon the success of Biden’s forthcoming presidency, and whether he stands for reelection.

Another key factor that will influence Republican prospects of winning back the White House in 2024 will ultimately be whether, and how quickly, the party can unite around its eventual nominee given the potential forthcoming debate between moderate/centrist Republicans and pro-Trump insurgents over future direction in the 2020s. While the circumstances of 2024 will be different from 2020, it is nonetheless the case that a rancorous, divisive Republican nomination contest may only benefit Biden (or the eventual Democratic presidential nominee) in four years.