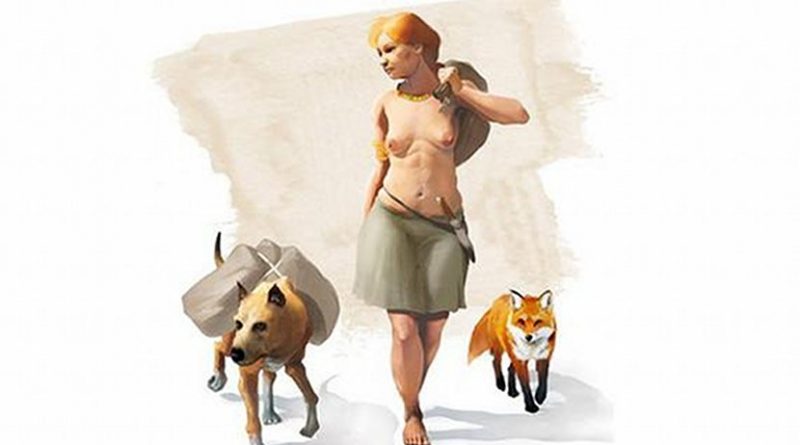 Artistic representation of a woman of the Bronze Age accompanied by a dog and a fox. Credit: J. A. Peñas

In the northeast of the Iberian Peninsula, between the third and second millennium BC, a widespread funeral practice consisted in burying humans with animals. Scientists have discovered that both foxes and dogs were domesticated, as their diet was similar to that of their owners.

The discovery of four foxes and a large number of dogs at the Can Roqueta (Barcelona) and Minferri (Lleida) sites stands out among the many examples of tombs in different parts of the north-eastern peninsula. These burials reveal a generalized funeral practice that proliferated in the Early to Middle Bronze Age: that of burying humans together with domestic animals.

What is most striking about these sites is the way of burying the dead in large silos, along with their dogs and a few foxes. “We discovered that in some cases the dogs received a special kind of food. We believe this is linked to their function as working dogs. Besides, one of the foxes shows signs of having already been a domestic animal in those times,” Aurora Grandal-d’Anglade, co-author of a study on the relationship between humans and dogs through their diet published in the journal Archaeological and Anthropological Sciences, has said to to Sinc.

By means of studying stable carbon and nitrogen isotopes in bone collagen, as well as archaeological, archaeobiological and anthropological studies, researchers have been able to compare the diets of buried animals with their owners´ diet. A total of 37 dogs, 19 domestic ungulates and 64 humans were analyzed. The results indicate that the dogs’ diet was similar to that of humans.

The isotopic study of the Minferri foxes shows a varied diet: in some cases it looks similar to that of the dogs at that site, and in another it looks more like that of a wild animal or one that had little contact with humans.

“The case of the Can Roqueta fox is very special, because it is an old animal, with a broken leg. The fracture is still in its healing process, and shows signs of having been immobilized (cured) by humans. The feeding of this animal is very unusual, as it is more akin to a puppy dog’s. We interpret it as a domestic animal that lived for a long time with humans,” explains Grandal.

The study points out that, in some particular cases in Can Roqueta, there was a specific cereal-rich food preparation for larger dogs probably used for carrying loads, and for at least one of the foxes.

“These specimens also show signs of disorders in the spinal column linked to the transport of heavy objects. Humans were probably looking for a high-carbohydrate diet because the animals developed a more active job, which required immediate calorie expenditure. It may seem strange that dogs were basically fed with cereals, but this was already recommended by the first-century Hispano-Roman agronomist Lucius Junius Moderatus Columella , in his work De re rustica”, says Silvia Albizuri Canadell, co-author of the work and archaeozoologist at the University of Barcelona.

Other animals, such as cows, sheep or goats are noted for an herbivorous diet. Their function was probably to provide milk, meat or wool rather than serve as a work force. “The horse was not yet widespread in those societies, no traces of it can be found until later times,” adds the scientist.

In general, humans and dogs show somewhat higher isotopic signals than ungulates, which indicates a certain (not very high) consumption of animal protein, “not necessarily much meat; they could be, for example, derived from milk,” explains Grandal. Archaeological objects included sieves that served as ‘cheese making devices’.

Moreover, men seem to have included more meat than women in their diet. As for dogs, their diet may have been mainly from leftovers of what humans ate, mostly more similar to that of women and children. “That’s why we thought they were more linked to these domestic environments,” says the researcher. There are many ethnographic parallels that indicate this relationship between women and dogs.

Feeding and treatment of foxes and dogs

The fundamental role of dogs during the Bronze Age, when livestock, along with agriculture, constituted the basis of the economy, was that of the surveillance and guidance of herds. They were also responsible for taking care of human settlements, given the risk posed by the frequent presence of dangerous animals such as wolves or bears.

“The characteristics of dogs include their great intelligence, easy trainability and, undoubtedly, their defensive behaviour. As if that were not enough, this animal was used until the nineteenth century AD in North America, Canada and Europe for light transport on its back and for dragging carts and sleds. It also functioned as a pack animal on the Peninsula during the Bronze Age,” Albizuri Canadell claims.

Some archaeological specimens from North America show bone disorders that stem from the pulling of ‘travois’. There are also accounts by the first colonizers of the use of dogs in these tasks by Indian populations until the nineteenth century AD, although they had not been identified in Europe until a few years ago.

“It was the Can Roqueta specimens under study that triggered the alarm about the use of this animal for light loads since antiquity, and they’re an exceptional case in Europe,” says Albizuri Canadell.

Similar pathologies have also been recently identified in the vertebrae of Siberian Palaeolithic dogs, leading one to think that one of the first tasks since their early domestication was the pulling of sleds and travois, in addition to hunting.

Its role as a transport animal in the first migrations and human movements through glacial Europe could have been fundamental and much more important than believed until recently.

The reason for animal offerings

Exceptional findings, such as those of tomb #88 and #405 of the Minferri site (Lleida), show that during the Bronze Age there were already well-differentiated funeral treatments in human communities.

“In the two structures mentioned above, the remains of three individuals were found together with animal offerings. In tomb #88 there was the body of an old man with the remains of a whole cow and the legs of up to seven goats. Theremains of a young woman with the offering of a whole goat, two foxes and a bovine horn were also found,” states Ariadna Nieto Espinet, an archaeologist from the University of Lleida and also the co-author of the study.

Structure #405 uncovered the body of an individual, possibly a woman, accompanied by the whole bodies of two bovines and two dogs. “We still don’t know why only a few people would have had the right or privilege to be buried with this type of offering, unlike what happens with the vast majority of burials,” the expert points out.

In Can Roqueta, clear differences have also been observed in the deposits of domestic animals within the tombs of adults, both men and women, which are even reflected in children’s tombs. From this we can infer the existence of an inheritance of social status from birth.

“It is tempting to think that if we understand domestic animals as a very important part of the agro- pastoral agro-shepherding economy of the Bronze Age and of the belongings of some people in life, these could be an indicator of the wealth of the deceased individual or of his clan or family,” argues Nieto Espinet.

“It seems that species such as bovines and dogs, two of the most recurring animals in funeral offerings, are those that might have played a fundamental role in the economy and work as well as in the symbolic world, becoming elements of ostentation, prestige and protection,” she concludes.

Home » Foxes Were Domesticated By Humans In The Bronze Age