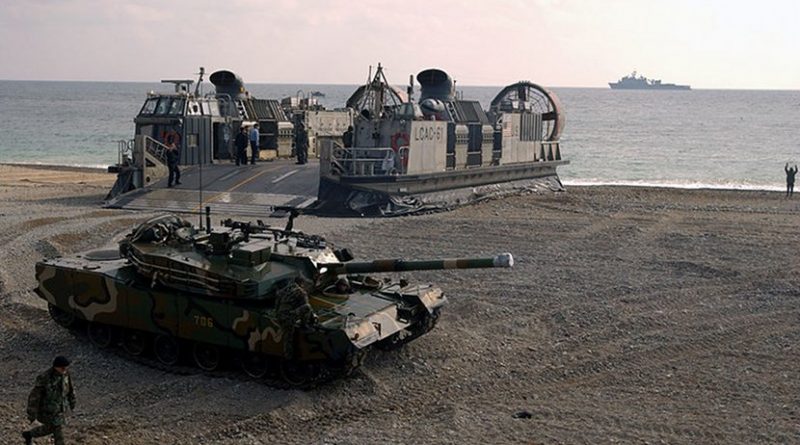 A recent article in the Wall Street Journal warns of new suppliers of cheap, “good enough” weapons flooding the global arms market. This concern is overblown, and traditional arms exporters in the United States and Europe will continue to dominate the global arms trade for some time to come.

A RECENT article in the Wall Street Journal (“The ‘Hyundaisation’ of the Global Arms Industry,” April 5, 2015) puts forth a provocative argument, namely that “new defence exporters are joining the global game with advanced and well-priced offerings, creating potential threat to the US and its allies, and weakening Western influence”. In other words, the proliferation of cheap, “good enough” weapons by neophyte arms exporters like Brazil, South Korea, and Turkey will undermine the United States’ dominance of the global arms trade. The emergence of such new arms exporters will have grave economic repercussions for US arms producers, as well as negative ramifications for Washington’s global sway.

This would not just cut into the profits of those US and European defence mega-firms who traditionally have dominated the global arms business; it would also complicate efforts to control the proliferation of advanced conventional weapons and the enabling technologies behind them.

Flooding the global arms market with relatively cheap but highly capable weapons systems would not only increase the probability of conflict — that conflict would likely be more “high-tech” and therefore more devastating in its effect. Certainly there has been a significant expansion over the past three decades in the number of countries around the world who are producing weapons systems, and some of these homegrown weapons are pretty impressive.

South Korea manufactures a tank nearly on par with the US M-1A2 or the German Leopard II. Korea is also producing a lightweight fighter jet, the T-50, as well as artillery systems, armoured vehicles, and submarines. For its part, Brazil manufactures an excellent turboprop plane, the A-29 Super Tucano, intended for counter-insurgency operations and ground attack, and is developing a new medium-sized transport plane, the KC-390. South Africa produces air-to-air missiles and UAVs, and Turkey builds armoured vehicles.

Moreover, many of these countries have already successfully entered the global arms market. South Korea has sold its T-50 fighter to Indonesia, Philippines, and Iraq. Brazil’s Super Tucano has been acquired by at least ten air forces, including the US Air Force, and Turkey has exported armoured vehicles to Malaysia.

US still #1 in the global arms market

That said, the amount of arms these countries have sold around the world, relative to the United States or Western Europe, is small potatoes. According to the Stockholm International Peace Research Institute, the combined value of arms deliveries by ten of the largest arms-exporting countries in the developing world – Brazil, Jordan, India, Iran, South Korea, Serbia, Singapore, South Africa, Turkey, and the United Arab Emirates – amounted to barely two percent of all the world’s arms trade for the period 2000-2014, or about US$7.3 billion worth.

In contrast, over the same period, the United States exported over US$110 billion worth of arms, capturing nearly one-third of the global market. Russia was the second-largest arms exporter, with around a quarter of the market, while the four largest West European arms exporters – France, Germany, Italy and the United Kingdom – together accounted for around 20-22 percent. China, on average, has typically captured only around 4-5 percent of the global arms trade.

In fact, penetrating the global arms market has been a lot harder than most would-be arms sellers thought it would be. Many factors besides price and capabilities go into a customer’s decision to buy: can the supplier be relied upon to provide spare parts and maintenance?

Has the weapon been proven in battle? Does the seller’s home country have enough faith in the system that its own military has also acquired it? Does the weapon include critical parts or subsystems that are supplied by a third party and which could possibly be restricted (for example, the Korean T-50 uses a US jet engine, effectively giving Washington a veto over exports of this aircraft)? Finally, does purchasing a particular weapon help to achieve other political-military goals, such as boosting alliances, promoting military interoperability, or forging closer diplomatic ties?

In fact, if there exists any serious competition to US dominance of the global arms trade, it comes from Russia, not the developing world. After the collapse of the Soviet Union, Russia’s share of all global arms transfers fell to around 12 percent; starting around 2000, however, Russian defence exports came roaring back, and today it gives the US defence industry a real run for its money in the global arms market.

Perhaps the only newly industrialised country to have scored major successes in global arms trade is Israel. The Israeli arms industry is overwhelmingly export-oriented, and, on average, approximately three-quarters of its defence output are sold abroad. Major exports include unmanned aerial vehicles, air-to-air and surface-to-air missiles, anti-tank munitions, and radar and other sensors.

The Wall Street Journal article also darkly notes that some states like Iran and North Korea could become exploiters – and eventually, exporters – of “third option” technologies like cyber, robotics, and 3D printing. This is certainly possible, but hardly probable in the short run.

Even if these new arms producers do not offer much competition to the US for third-party arms sales, they could still present a challenge to the US defence industry – namely, they could capture domestic orders for military equipment that might otherwise go to US defence firms. South Korea manufactures its own armoured vehicles, artillery systems, and light jet aircraft; therefore, it need not import such systems from the US. Brazil’s KC-390 transport plane will negate the need to acquire C-130 cargo aircraft. Singapore produces the SAR-21 assault rifle; therefore, it does notbuy the US M4 carbine. All in all, producing arms as an import-substitution strategy may erode US arms exports more than any competition for third-party sales.

The potential “Hyundaisation” of the global arms industry certainly bears watching. At the same time, it is not a foregone conclusion.

Richard A. Bitzinger is Senior Fellow and Coordinator of the Military Transformation Program at the S. Rajaratnam School of International Studies (RSIS), Nanyang Technological University, Singapore. Formerly with the RAND Corp. and the Defence Budget Project, he has been writing on defence industries and the global arms trade for more than 20 years.