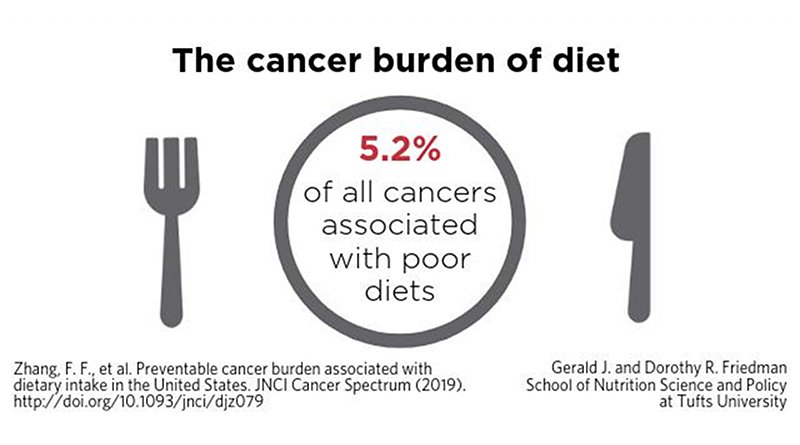 A new modeling study estimates the number, proportion, and type of specific cancers associated with the under or overconsumption of foods and sugar-sweetened beverages among American adults. The analysis is one of the few to focus on the modifiable risk factors for cancer connected to food intake in the United States.

“Our findings underscore the opportunity to reduce cancer burden and disparities in the United States by improving food intake,” said first and corresponding author Fang Fang Zhang, a cancer and nutrition researcher at the Friedman School of Nutrition Science and Policy at Tufts.

To estimate the cancer burden associated with suboptimal diet, the researchers utilized the risk estimates of diet and cancer relations based on meta-analyses of prospective cohort studies with limited evidence of bias from confounding, mostly from the World Cancer Research Fund International (WCRF) and the American Institute for Cancer Research (AICR) Third Expert Report.

The study’s main findings include:

The team defined optimal dietary intake based on the dietary distributions associated with the lowest disease risk as assessed by the World Health Organization’s Global Burden of Disease (GBD) project. The researchers modified the GBD comparative risk assessment framework’s population-attributable fraction (PAF) equation to estimate the proportion of all cancer cases that can be attributed to suboptimal diet in each age, gender, and race/ethnicity stratum.

The researchers caution that self-reported dietary intake data is subject to measurement error. In addition, diet-cancer risk estimates may differ by sex, age, race/ethnicity and other modifiers. It was not possible to account for how the dietary factors might interact with each other when consumed together.