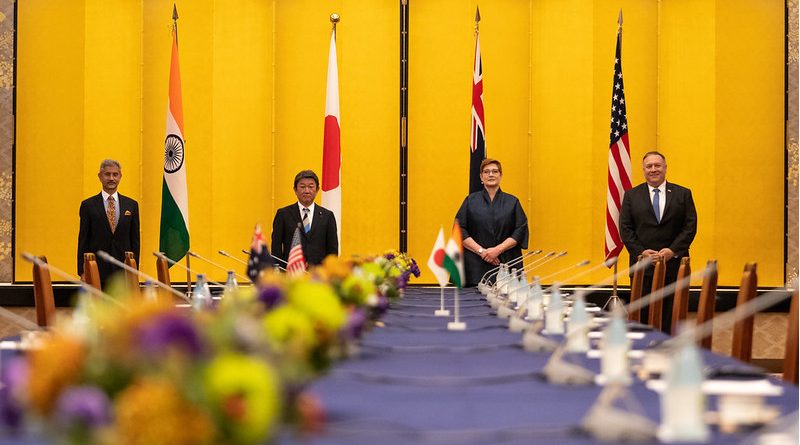 The first standalone ministerial meeting of the Quadrilateral Security Dialogue (Quad), hosted by Tokyo early this month, raised expectations about the role the four-member group will play in the fast-changing Indo-Pacific strategic landscape. India’s invitation for Australia to join the 2020 Malabar exercises next month transformed what began as U.S.-India maritime drills in 1992 into a new Quad platform. Should the United States, Japan, Australia, and India move toward institutionalizing the informal cluster, they will face four key quandaries. These include how they would imagine the Quad’s nature, its relations with other regional organizations, its outlook on China, and its potential expansion.

The first quandary is whether the Quad desires to become the premier bloc or just one of a number of regional constellations in an increasingly multipolar world. India, for instance, is also a member of the BRICS grouping (Brazil-Russia-India-China-South Africa) and the Shanghai Cooperation Organization. With three of the four members being part of the U.S. hub-and-spoke alliance system, will the Quad become the nucleus of an Asian NATO? How does the Quad position itself in the larger scheme of things—defender of the status quo, rule setter, or reformer of prevailing security and economic architectures?

To distinguish the feasible from the aspirational, Quad members will have to ascertain the degree of convergence in their shared interests, as well as their individual comfort levels. The scope of issues the Quad hopes to cover shows how far it has come from an ad-hoc tsunami response group in 2004. The post-meeting read-outs by Quad ministers demonstrate that they intend to go beyond pandemic response and economic recovery. Talk of cooperation in the areas of resilient supply chains, maritime security, cybersecurity, digital economy, quality infrastructure and connectivity, and counterterrorism demonstrates growing consensus on a wide range of domains. But what form and shape the organization will take to fulfill these goals has yet to be tabled.

The second quandary is how the Quad will relate to other existing organizations within the region. While the Tokyo meeting did reiterate support for ASEAN centrality and the role of ASEAN-led venues like the East Asia Summit, undercurrents of dismay percolate. In fact, the renewed emphasis on the Quad may be taken as a reflection of this growing frustration over the slow pace, indecisiveness, and division within Southeast Asia, especially in dealing with China or the South China Sea disputes. If this is so, the Quad may advance a mini-lateral, not multilateral, approach in dealing with polarizing issues. While such an approach may enable more effective responses in the short term, it may also be a slippery slope that could undermine regional cohesion in resolving intractable issues going forward.

Quad members may also have to determine the extent of coordination they need to harmonize their individual strategies and approaches to the region with the Quad’s pursuits. These include Australia’s Pacific Step-Up, Japan’s ASEAN push, India’s Act East Policy, and America’s broader Free and Open Indo-Pacific Strategy.

The third quandary is to what extent China will loom large on the Quad’s agenda. The problem with fixing China as the central focus is that the group’s momentum could wax and wane depending on how Beijing conducts itself. There is no question that a revanchist and revisionist China fires the embers of the Quad. But should a switch to a charm offensive for Beijing disarm and stifle the Quad’s formalization? Along with obviously eliciting consternation from China, fixation with one country also generates worries among regional states hesitant to pick sides, diminishing their enthusiasm to openly support or join the Quad. Thus, more than professing its desire to be inclusive, the Quad may do well to stick with promoting values and presenting alternatives, rather than orienting itself entirely around the current China challenge. In this way, it would not have to reinvent itself every time a new issue came to the fore.

China also presents unique challenges to different Quad members. Territorial and maritime disputes and geographic proximity heighten threat perceptions, but economic interdependence and the high stakes of conflict may lead to disparate assessments. Furthermore, the Quad may also represent a leap of faith for some. For instance, notwithstanding its simmering border spat with China, a greater emphasis on the Quad and especially its security dimension may impact India’s avowed tradition of non-alignment and strategic autonomy. Washington’s designation of a new Special Coordinator for Tibetan Issues may also further complicate Delhi’s already fraught ties with Beijing. India hosts the Tibetan government-in-exile and is home to the largest Tibetan diaspora community. If the new U.S. office works with the Central Tibetan Administration based in Dharamsala in the northern Indian state of Himachal Pradesh, a new dimension in Sino-Indian friction may open.

Finally, the Quad should determine what defining values it wishes to banner. While freedom of navigation and democracy are obvious given that the four members are all maritime democracies, overstressing democratic credentials may be limiting and would go against its professions of inclusiveness. For instance, it may preclude Vietnam, a forward leaning claimant in the South China Sea vocal in opposing China’s unlawful maritime claims. Hanoi, this year’s ASEAN Chair, took part in a vice-ministerial meeting of the “Quad Plus” last March along with South Korea and New Zealand. The Quad may also have to ask hard questions about whether to suspend or welcome officially democratic states under increasingly illiberal governments.

This may test the original Quad members’ commitment to some of their country’s foundational values. For instance, the Pentagon’s invitation to Indonesian Defense Minister Prabowo Subianto to visit Washington raised concerns about a shift in U.S. position, overlooking the former general’s involvement in alleged rights abuses during the 1998 riots in Indonesia. If the Quad decides to look the other way on human rights and democracy and instead emphasize the upkeep of an international rules-based order, it may weaken its ground in criticizing China’s domestic policies toward Hong Kong and Xinjiang.

As the Indo-Pacific rapidly changes, countries, big and small, will continue to reconstitute regional configurations to ensure stability, security, and prosperity for all. Addressing these four quandaries will go a long way in enabling the Quad to play a robust role in this vibrant and promising mega-region in the years to come.

This article was published by AMTI