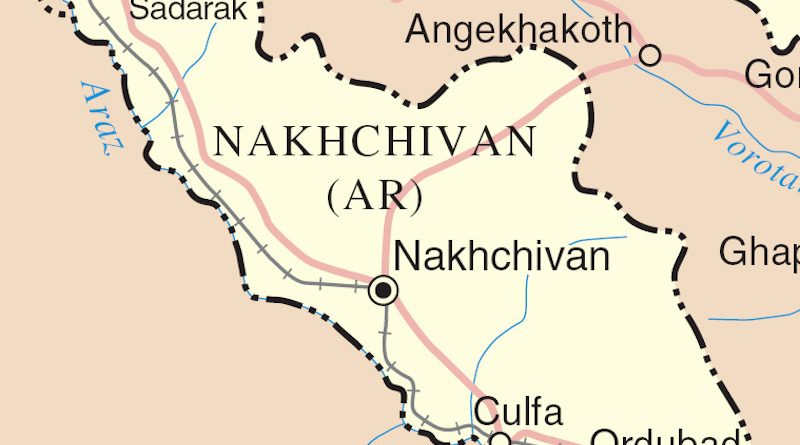 Detail of map of Nakhchivan Autonomous Republic, the landlocked exclave of the Republic of Azerbaijan. Credit: Wikipedia Commons

As the details of the Karabakh deal are being fleshed out, the stipulation on the new corridor through Armenian territory has caused great debate. Beyond the signatories of the deal, Iran and Georgia are particularly worried as any meaningful change to the connectivity patterns in the South Caucasus could harm their transit capabilities.

The 2020 Karabakh war ended with major Russian diplomatic success on November 9 when a tripartite agreement between Armenia, Azerbaijan and Russia was signed. The surrounding seven regions were to be returned to Baku, while Russian peacekeepers would guarantee the security of the truncated Nagorno-Karabakh. Though the exact role is yet to be confirmed, based on the rhetoric from Ankara and Baku, some sort of direct Turkish military involvement on Azeri soil is likely to materialize.

More importantly, however, Turkey gained a land corridor to Azerbaijan’s exclave of Nakhchivan. The stipulation in the document reads: “Armenia guarantees the security of transport links … for unimpeded movement of citizens, vehicles, and cargo in both directions” between mainland Azerbaijan and the exclave of Nakhchivan, which are separated by Armenian territory. Moreover, “Transport control is exercised by the Border Service of the Federal Security Service of Russia. By agreement of the parties, the construction of new transport communications connecting the Nakhchivan Autonomous Republic and Azerbaijan’s western regions will be provided.”

The stipulation is a major breakthrough for Turkey as it would allow the country to anchor its influence on the Caspian Sea and perhaps, in the longer term, look even further towards its Central Asia kinsmen.

This would create a major dilemma for Iran and Russia, as Tehran and Moscow have historically perceived the Caspian Sea as a condominium between themselves (plus the littoral states since the end of the Soviet Union). Potential Turkish involvement could disrupt this equilibrium and especially Iran’s standing. However, this is highly hypothetical. After all, it would need years if not decades for this scenario to be realized and even then Turkish influence could not be as large as Chinese or Russian – two major forces in the region.

What bothers Iran is a potentially major shift in the region’s transportation routes. For decades Azerbaijan has been dependent on Iran for transiting energy and other supplies to Nakhchivan. The new Karabakh deal could change it. Armenia will now guarantee the opening up of a corridor through its territory to allow Azerbaijan to transport goods directly to Nakhichevan. Quite naturally, this limits Tehran’s leverage over Baku.

However, Javad Hedayati, who heads transit operations in the Iranian transportation ministry, announced that Iran is likely to stay a favorable route for trade despite the planned opening of the new corridor. “It is likely that this corridor will merely accommodate local traffic between the Republic of Azerbaijan and Nakhchivan,” said Hedayati.

Ankara has long been working on using the Nakhchivan corridor for geopolitical purposes. This is proved by the quickness with which the Turkish government announced the plans to build a railway to Nakhchivan following the November agreement. This comes on top of an earlier announcement of a gas pipeline construction to the exclave, and underlines the seriousness behind the Turkish intention, at least regarding the section from the Turkish territory to the exclave itself.

Much, however, remains unclear about the new corridor on the Armenia territory itself. First of all, will the road be used by the Turks and Azerbaijanis only? Considering the level of mistrust in Ankara and Baku towards Moscow, whose forces will be controlling this corridor, it is highly unlikely that Azerbaijan and Turkey will be willing to commit large financial resources to rebuild links on the Armenian land. After all, will the corridor be the Armenian territory, or will it fall under the tripartite administrative regime? These are arguably the defining questions which remain unanswered. One could also imagine constant incidents along the corridor as Armenia will remain unhappy with the stipulation. Transit fees could soften Yerevan’s position, but why should Russia be interested in the operation of the corridor? If the corridor is operational, these troublesome questions will have to be managed between the two sides sharing no trust in the other. These dilemmas were well summed up in the words of the Iranian official Hedayati. He stressed that Armenia could prevent Turkey’s access to the corridor for transfer of freight or passengers through Nakhchivan to Azerbaijan and further to countries to the east of the Caspian Sea.

One country which is particularly worried with the potential development of the new corridor is Georgia. Various pipelines, roads and a major railway transit the country from Azerbaijan on to Turkey. This has been a backbone of Georgia’s regional importance since the end of the Soviet Union and indeed served as a major attraction for larger players such as Europe and the US.

Quite naturally many in Tbilisi have begun to think whether this enviable position could be challenged. The consensus thought is that in the short and medium term no reshuffling in the region’s connectivity patterns is likely to take place. Even in the longer term, if the above mentioned uncertainties around the new corridor are resolved, many still believe that Baku and Ankara would not trade the already built and functioning railway and pipeline infrastructure, which runs through Georgia, for the Nakhchivan alternative. Perhaps the corridor will serve for ensuring local connections, perhaps limited trade (though highly unlikely).

After all, Georgia has been officially engaged in the trilateral partnership with Turkey and Azerbaijan for nearly a decade. The endurance of the format has been tested by changes of governments and region-wide geopolitical transformations over the last decade. Each country of the three needs the others. Turkey wants a more stable Georgia with deeper economic and energy relations, while Azerbaijan needs Turkey’s backing. Georgia, under pressure from Russia and, given that it is located between its two fellow members of the cooperation, dependent on transit, in turn needs both Turkey and Azerbaijan.

Georgia also sees its position as straddling between two large regions – Europe and Central Asia. The 826-kilometre Baku-Tbilisi-Kars railway unveiled in 2017 enables the delivery of cargo between China and Europe with a haulage duration of approximately two weeks. Up to eight million tons of cargo may be carried via the railway by 2025.

Abandoning this transit corridor would undermine the efficacy of the South Caucasus transportation and energy corridor. This makes the extent of the Nakhchevan corridor quite limited. Perhaps, what the region is likely to see is the growing interconnectedness of the exclave with the Turkish territory. The emergence of a major corridor through the Nakhchivan is likely to happen if, at minimum, a meaningful improvement of Turkey-Armenia relations takes place.

COVID-19 will be the priority for health systems around the world in the year ahead. However, diseases like dementia are